By: Maggie, Tyler, and Aaron

By: Maggie, Tyler, and Aaron

Map of places it is practiced

In 2014 this ritual starts on Friday, October 24th and ends on Sunday, November 23rd. It is also known as Asura. "Ashura" is a highly important day for both sects of Islam the Shias and the Sunnis.
Source: http://www.jmicnj.org/islam/islamic-articles/129-historical-significance-of-10th-muharram.html

5 principles of the religion 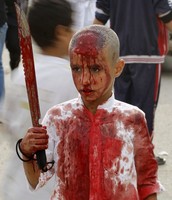 Shi'a Muslims have gathered for an Ashura

Ashura is a ten-day event that commemorates the death of the Prophet Mohammad's grandson. He was killed in a seventh-century battle. To commemorate his death it is Shi'a tradition for self-flagellation.

Man taking a part in a ritual

Shia people have massive parades known as "Matam" in which they flog themselves with China's, blades and knives.

Even shia people take part in the ritual

Taking part of their rituals

A Shia flagallets himself to honor his leader

Shias walk though a fire during the Ashura feetival 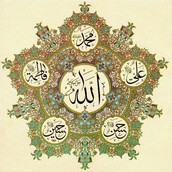 One of the symbols for Shia Islam

This is one place wher Shia Islam is practiced. This is what they might look like when they are getting ready for a ceramony or celebration