Nikalus is using Smore newsletters to spread the word online.

Get email updates from Nikalus:

Also know as Battle of Sharpsburg

Also know as Battle of Sharpsburg

The battle of Antietam was fought Sept.17 1862 near Sharpsburg,Maryland. The first major battle in American Civil War. This took place on Union Soil. It is the bloodiest single day battle in American history. The death toll was 22,719
There was an act to free all slaves in areas rebelling against the United States This act started Sept.22 and was effective til Jan.1 1863 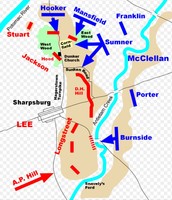 Nikalus is using Smore newsletters to spread the word online.