Students who care about the health and happiness of their peers, and who want to take a stand by improving the quality and pricing of food in the Coppell High School cafeteria.

School Board who care about their schools and make most of the big decision when it comes to the school's health, education, and well being and can make the biggest changes to the way our schools work.

The Better Cafeteria Campaign will animate students, parents, and school board members to take another look at the CHS cafeteria system and make a change.

Doing a radio ad will get through to the most students. I will have the ad play on the morning announcements when we have them in 3rd period so that the students of the school hear the ad when they are still hungry opposed to in 5th period when they just ate.

I used the slogan “I want...” a lot in the ad. After the slogan the individual student would say what food they would like to see in the school cafeteria. I used the slogan to get the viewers of the radio ad to think about what they would like to see in the cafeteria. I used the plain folks appeal to target the students personally because in this way I could reach the most of them. with three thousand students at the school, a good majority of them would relate to a regular person. I used the generalization of eating healthier to target the most people because I generalized that most people would like to eat and feel healthier. And with better tasting food, that also tastes good people that normally buy junk food from the school store could eat better food and also lose weight. 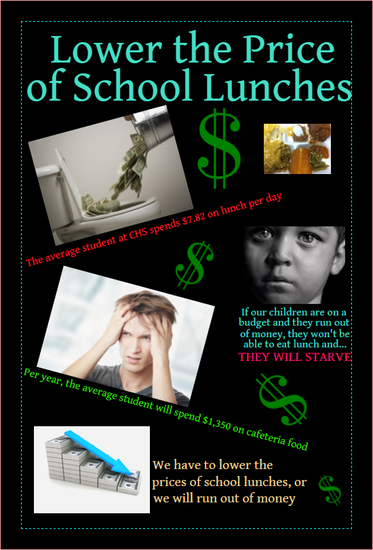 I used logical fallacies in my poster in the form of false statistics to trick the audience into thinking that we are paying ridiculous prices for food. They would see these statistics and prices and be taken aback, and would be more willing to stand up. I also used appeal to pity in my poster in the form of a picture of a sad child. This picture along with the explanation that the parents' children will starve if they run out of lunch money evokes emotion in the parents and will make them want to fight for the cause. The final technique I used, false dilemma, comes into the poster in the form of the choice that the parents have to 'lower the prices of school lunches, or' they 'will run out of money.' This makes the audience anxious and makes them want to make a change before they run out of money. These propaganda techniques will make these parents of high school students stand up and fight to lower the prices of school lunches.

The Radio Ad will be aired in all radio stations across Texas right before lunch when people in our school board are about to head out to lunch when they are most likely the hungriest. It will be aired at the same times every day for an entire month so it will be hard to miss, resist, and think about since food would be the most thought of at the moment because of being hungry. This can be most effective opposed to when they are not hungry or have already eaten.

In this radio ad the band wagon is used to persuade the school board to bring better food to our cafeterias. Telling the listeners that hundreds of school have already changed their meal plans in other school can help add on to the persuasion that will sway the school board to support better foods. Name calling was also used to help persuade the school board because it gives them a mental image of disgusting food, and will make them want to change it. Calling the food sloppy and saying it makes students gag triggers an emotional response in the people of the school board, it would make them feel bad for students for having to eat such bad food. Another method used in the radio ad was appeal to fear. We used phrases like “do you want to be fat?” and phrases like “keep those scary, unhealthy, and nasty foods away from your diet.” These phrases helped to grow a fear inside the listener’s heads which would help those like our school board to persuade them to help keep the people and kids in our schools from possibly becoming fat and obese.