The Start of the Montgomery Bus Boycott.

On December 1, 1955 Rosa Parks refuses to give up her seat to a white man in doing so she gets herself arrested and inspires the Montgomery Bus Boycott. Jo Ann Robinson helps organize 40,000 people in just two day after this incident to mount a one-day bus boycott. On December 5th of 1955 the people vote to keep this protest going. Montgomery Officials tried to sabotage the boycott no matter what. Martin Luther King Jr. and Ralph Abernathy were both arrested. After this violence began and four churches, and King and Abernathy's homes were bombed. But the boycott still continued to protest. King and Abernathy created an organization called the Montgomery Improvement Association (MIA) hoped for 50% of African Americans to support them but were pleasantly surprised to have 99% of African Americans supporting them. Because so many African Americans didn't ride the buses they lost tons and tons of money. Finally the Supreme Court ruled in favor of the MIA and segregated buses was declared unconstitutional. This was only the beginning of the revolution. 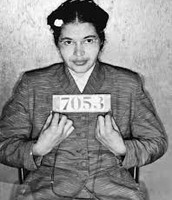 Rosa Parks refused to give her seat up for a white man on a bus. She was the one who inspired the start of the protests against segregation. 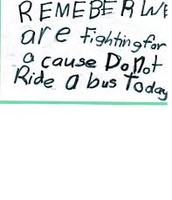 Because 99% of African Americans stopped riding buses the bus company suffered and lost tons of money.