The constitution was written in 1787.The Constitution is over 200 years old. The delegates from each state, met from May to September. They are known as the framers.The New Hampshire delegates would not show up until July. There were 55 people who wrote the constitution. Some of the people that were there are James Madison, Benjamin Franklin, George Washington, Thomas Jefferson, and John Adams. The problem facing this remarkable group of men was that the Articles of Confederation just weren't working. Under the articles there was no chief executive, President, there was no set court system, and there was not away for the central government to operate. It was necessary for the new nation to hold it together. The framers were able to come together and write a constitution that would enable the new government to work. This document let them share power, collect tax money, set up courts, make laws, enforces those laws.

The three parts of the government are the Legislative Branch, Executive, and the Judical Branches or groups. The Legislative is made up of Congress, the senate, and the House of representatives. The Executive is made up of the President , Vice President and the cabinets. The Judicial is made up of the supreme court and the other Federal Courts. Each state has its own constitution that runs the laws of the state that are not covered by the federal government. They each have three brarnches of the government, just like the federal government. The states have legislatures that make up the state laws ,handle the budget and levy taxes. The three branches of government are like a system of checks and balances 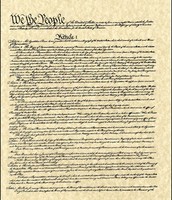 Follow audrey major
Contact audrey major
Embed code is for website/blog and not email. To embed your newsletter in a Mass Notification System, click HERE to see how or reach out to support@smore.com