Birds of Prey: Masters of the Sky

Birds of Prey: Masters of the Sky

Definition: a bird that hunts or feeds on other animals.

Sentence: As I looked out the window, I noticed a big brown bird, a bird of prey, land on the picket fence lining our property.

Definition: something during the day.

Sentence: Remembering all of the animals that I had seen that day at the zoo, I was amazed how many were diurnal.

Definition: all of a birds feathers together

Sentence: Based on the books that I have read, I believe that many male birds of paradise have more colorful plumage than the females do.

A Summary of What I Learned

What I have learned about birds of prey is that birds of prey, or raptors, are birds that eat other animals. Raptor comes from the Latin word rapere, meaning to seize or take by force. They are characterized by their keen vision that allows them to see their prey from far away, and by their talons and beaks. Female birds of prey are usually bigger than males. Most diurnal birds of prey haves subdued feather colors, mostly browns, but also rust, black, and white. Many birds of prey have mature and immature plumage. Some birds of prey, especially hawks, have light and dark color variations that have to do with habitat. Almost all birds of prey fly a long time before they find their nesting spot, and some mate for life, like Red Tailed Hawks. The different kinds of bird of prey are Eagles, Ospreys, Kites, Falcons, Hawks, Harriers, Buzzards, Vultures, and Owls. These are the things that I have learned about birds of prey during my research.

Connections I Had During Reasearch

When I was doing research, I noticed that birds of prey are very precise. They look a lot and choose their position carefully before they dive for their prey. They also look for the best spot to have their young and what is the best spot to have their territory on. This connects to humans because we can be very precise also. We look for awhile to find the right spot to build our house. We look to find the apples without bruises at the grocery store and some of us take a bit to find the clothing that we want to buy. Both birds of prey and people are very precise. This is a connection that I found between birds of prey and humans while I was doing my research.

Another connection that I found was that birds of prey are very protective of their young. If another predator comes to close, or a human comes to look at the babies, they will attack them or screech at them to go away. Some of them will even chase them away from the nest or lure them away by pretending to have a broken wing. This connects to my parents because they are very protective too. They won't let me have a sleep over or any where they don't think is safe. This is the second connection a found during research. 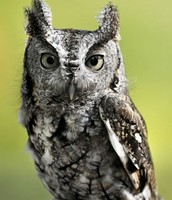 This photo is of a bald eagle's head, showing it's tell tale white head. 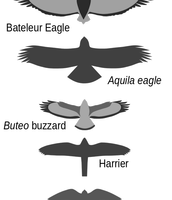 This chart shows different birds of prey in flight, and their size compared to others.