The Battle of Ticonderoga was between two rivers. On the northeast side of New York. The battle was in Ticonderoga (Which gave it the name). 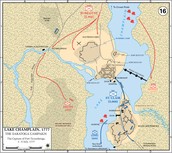 The American wanted to surprise British at night. /The British had no plan, but surrendering

The American decided to retreat./The British knew it was easier from the hills attack from the mountains.

The Americans tried to take back the fort./The British defended the fort.

The turning point was when the British takes the fort back over in the second battle.

The British won and keep the fort for the rest of the war. This battle was important because the British got supplies from Canada.