What's Happening at the Hive

What's Happening at the Hive

I hope that the break offered you time for rest, reflection, and connection.

We have certainly had a lot of celebration and opportunities to share gratitude in our Hive these past couple of weeks! Whether it has been students sharing pieces of writing they are most proud of, or our 8th graders connecting with their kindergarten buddies again to practice expected hallway behaviors that build community, or our Girls volleyball team bringing home the championship title, or staff members presenting at national and local conferences, the gifts in our community have been plentiful. Holding onto and finding the space to reflect and celebrate these moments of success, achievement and connection help us all navigate the more challenging times whether they appear in our immediate community or when violence and harm happening in other places impacts us and shakes our sense of safety and stability.

These next four weeks leading up to the longer winter break in December we can expect to see similar patterns of behavior emerging as we did leading up to this break with disruptions to schedules and what can be a stressful time building for students and adults. We can also expect that some of our students will need some support easing back into the school routine this week. We are meeting our students where they are and supporting them by previewing unexpected changes, maintaining consistency when possible, and reviewing and practicing expectations and routines. We know that these practices, coupled with engaging our students in instruction that meets their needs, will go a long way to supporting everyone in navigating these next few weeks positively.

I hope to see you all around the Hive over the next couple of weeks and if you are in the neighborhood tonight (Monday 11/28), don't forget to stop by the Brookline Booksmith to see Newbee and pick up a few books!

As some of our families start to think about and apply to independent schools I want to share the procedure for requesting recommendations and records from the FRR staff. The Public Schools of Brookline has standard recommendation forms that each of our educators fill out that are based off the forms found in the Ravenna portal. These are the forms our educators will use and submit to the schools that families request and provide releases for.

All requests for independent school recommendations and records must be submitted by email no later than December 15th.

For academic recommendation requests please email the academic educator directly and/or your child(ren)'s guidance counselor. For records requests and to submit releases please email kyra_reardon@psbma.org and provide the name of the schools where transcripts need to be sent.

If you have any questions about this process, please reach out to Jen Buller at jennifer_buller@psbma.org. 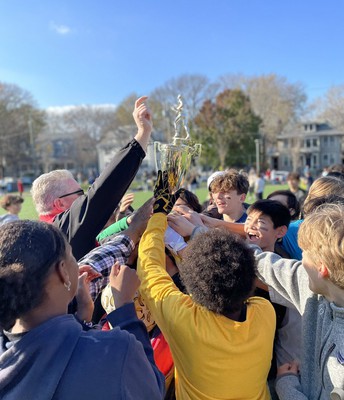 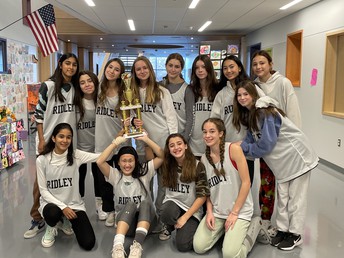 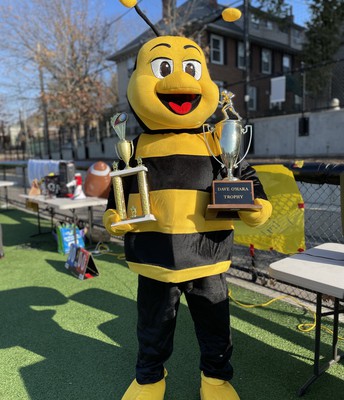 On this past Wednesday we had the opportunity to assemble as a whole school to celebrate the accomplishments of our many student athletes at our Fall Pep Rally. At the pep rally we celebrated our Girls on the Run, Cross Country, Volleyball, and DFL teams.

Girls on the Run

We are so proud of our Girls on the Run team and all the hard work they put in throughout the fall season training for their 5K. The team ran their 5K on Saturday November 20th starting and ending at Hormel Stadium in Medford. You can learn more about Girls on the Run and get excited for our Spring season in 2023!

Our inaugural boys volleyball team had a slow start as we almost didn't even field a team due to low interest and turnout at our first tryouts. Through some active recruiting, great coaching and camaraderie our boys team rallied as the season went on. With not a single member of the team ever playing on a volleyball team prior to this season, the boys team made it all the way to the semi finals losing a close battle with the Lincoln School team.

We knew our girls volleyball team was something special this year as we had a record number of participants turn out for tryouts. The girls dominated the courts during the regular season going undefeated and drawing big crowds at their home games. Off the court you could find them, and aspiring volleyball players, practicing at recess, before, and after school out on the turf. They even organized and rented gym space at Boston University to practice outside of school run practices! All their hard work paid off on Tuesday afternoon at the BHS Schluntz gym where our girls played three tough sets against Lincoln and emerged victorious to cap off their undefeated season with the championship!

We are excited for what the future holds for our volleyball program as these girls have inspired our 6th graders to start practicing and organizing already to hopefully have a repeat championship next year!

Our Friday afternoon Flag Football league for grades 6-8 students was a huge success this year. We had a record number of female identifying participants and for the first time in DFL history we had one team captained solely by female identifying students showcasing that we are moving toward more gender equity in this sport. Our DFL Super Bowl, a time honored tradition, brought back alum and families on Wednesday November 23rd to enjoy the game and time together before heading out for the break.

We look forward to continuing to celebrate the academic and athletic accomplishments of all our students as this year progresses!

Two COVID testing kits were sent home with each student prior to our Thanksgiving break.

We are hosting our School Council meetings this year on Zoom with the hopes that this will provide broad access to any family that would like to learn more about what is happening in and around our School Community. All of our meetings are open to the public and the agendas and meeting minutes are posted online on our school website.

Our first meeting of this school year in on Tuesday November 29th from 7:00 - 8:00pm. You can find our full schedule and link to the meeting below. All meetings are from 7:00 - 8:00pm EST and will be closed captioned.

Here is our Zoom link:

Below is the schedule for the rest of this fall's early release days for conferences. Please make arrangements for your child(ren) to be picked up on time at 12:40p each of these days.

Also, please note that Friday, December 23rd is a 12:00 Noon Dismissal for all students. 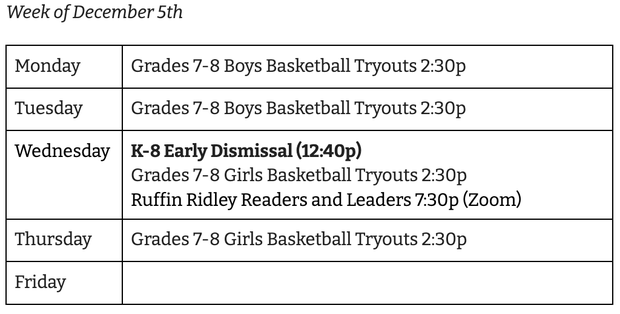 @TheHiveInCC
345 Harvard Street, Brookline, MA, USA jennifer_buller@psbma.org 617-879-4400 brookline.k12.ma.us/ruffinridley
Embed code is for website/blog and not email. To embed your newsletter in a Mass Notification System, click HERE to see how or reach out to support@smore.com
close