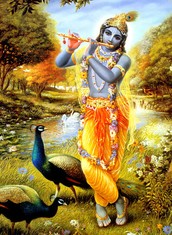 Krishna is an Indian god who is blue . Krishna is often described and portrayed as an infant eating butter, or as a young man playing the flute, or as a young man surround by one of his many wives. Krishna has many names such as Govinda, Mukunda, Madhusudhana, and Vasudeva. Some of the famous stories that Krishna is in are the Mahabharata and Bhagavata Purana.

Why Krishna is blue?

One of the theories is that Vishnu, because of his association with water, is depicted blue; therefore all his incarnations including Krishna, are shown as such. In Hinduism, persons who have depth of character and the capacity to fight evil are depicted as blue skinned

The many wives of Krishna

Krishna had about 16000 wives, which is a symbolic truth as he had rescued them from the captive of Narakasura. His main wives were eight in number. Although he was very close to Radha, they did not marry each other. Rukmini and Satyabhama were the most popular and closest wives of Lord Krishna. 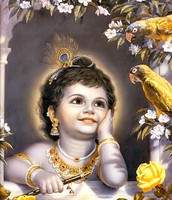 Why Krishna was cursed?

Gandhari, who was the mother of the Kauravas also had cursed Krishna for the death of the 100 Kauravas. She explained that she knew that Krishna was powerful enough to stop the massacre of her sons at Kurukshetra , but that he knowingly didn’t. She cursed the entire Yadava clan along with Krishna to be killed off after a period of 36 years. -

Krishna is no Ordinary Person 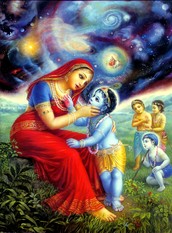 Once when Krishna was still a toddler, he was tagging along with elder brother Balarama and his friends as they collected fruits from the courtyard. Unable to reach the trees like his elder brother, he picked off dirt from the ground and crammed his mouth full of it. When the other children saw what he was doing, they ran to mother Yashoda and told her that Krishna was eating mud. Yashoda ran out to Krishna and asked him if he was indeed eating mud. Scared to open his mouth he nodded his head, saying no. Yashoda then told him to open his mouth, but Krishna was afraid he would get a scolding, so he kept his mouth shut tight. Yashoda looked at him sternly and ordered him to show the inside of his mouth. Krishna looked at her and opened his mouth. When Yashoda peered into it, she saw the entire universe inside – the earth and mountains and seas and galaxies and stars, every moving and stationary object, all the planets and moons. She was dumbstruck. When Krishna closed his mouth, she looked at him with a new respect, for she now understood that this was no ordinary child, but the Lord himself. 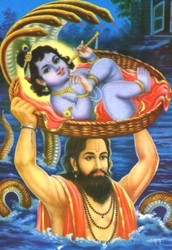 The birth of Krishna

Mother Earth who is unable to live with all of the bad things that evil kings and rulers have done. Goes to brahma(the creator) for help, brahma prays to lord Vishnu, who tells brahma that he(Vishnu) would be born again.(Vishnu has 10 forms of himself, one of them is Krishna). One such evil force was Kamsa, the ruler of Mathura (in northern India) and his people were utterly terrified of him. On the day Kamsa's sister Devaki was married off to Vasudeva, an akashvani or voice from the sky was heard prophesying that Devaki's 8th son would be the destroyer of Kamsa. The frightened Kamsa immediately unsheathed his sword to kill his sister but Vasudeva intervened and implored Kamsa to spare his bride, and promised to hand over every new born child to him. Kamsa relented but imprisoned both Devaki and her husband Vasudeva.When Devaki gave birth to her first child, Kamsa came to the prison cell and slaughtered the newborn. In this way, he killed the first six sons of Devaki. Even before her 8th child was born, Devaki and Vasudeva started lamenting its fate and theirs. Then suddenly Lord Vishnu appeared before them and said he himself was coming to rescue them and the people of Mathura. He asked Vasudeva to carry him to the house of his friend, the cowherd chief Nanda in Gokula right after his birth, where Nanda's wife Yashoda had given birth to a daughter.

He was to exchange his boy and bring Yashoda's baby daughter back to the prison. Vishnu assured them that "nothing shall bar your path".

At midnight on ashtami, the divine baby was born in Kamsa's prison. Remembering the divine instructions, Vasudeva clasped the child to his bosom and started for Gokula, but found that his legs were in chains. He jerked his legs and was unfettered! The massive iron-barred doors unlocked and opened up.

While crossing river Yamuna, Vasudeva held his baby high over his head. The rain fell in torrents and the river was in spate. But the water made way for Vasudeva and miraculously a five-mouthed snake followed him from behind and provided shelter over the baby.

When Vasudeva reached Gokula, he found the door of Nanda's house open. He exchanged the babies and hurried back to the prison of Kamsa with the baby girl. Early in the morning, all the people at Gokula rejoiced the birth of Nanda's beautiful male child. Vasudeva came back to Mathura and as he entered, the doors of the prison closed themselves.

When Kamsa came to know about the birth, he rushed inside the prison and tried to kill the baby. But this time it skipped from his hand and reaching the sky. She was transformed into the goddess Yogamaya, who told Kamsa: "O foolish! What will you get by killing me? Your nemesis is already born somewhere else."

In his youth Krishna killed Kamsa along with all his cruel associates, liberated his parents from prison, and reinstated Ugrasen as the King of Mathura.

Learn About the Birth of Krishna, Incarnation of the Supreme God

hinduism.about.com
The birth of Krishna is in itself a transcendental phenomenon that generates awe among the Hindus and overwhelms one and all with its supra mundane happenings.

The killing of Kaliya

Once Krishna and his friends are playing by the banks of Yamuna with their ball. The ball falls into the river, where the poisonous five-headed serpent Kaliya lives with his family. Kaliya was blinded by hatred and his venom had started poisoning the waters of Yamuna. Krishna dives into the waters to retrieve the ball, and encounters Kaliya. He orders Kaliya to stop poisoning the water and live peacefully, Blinded by rage, Kaliya refuses. Krishna fights the giant serpent. Krishna assumes the weight of the entire universe and dances on the naga’s head, soon overpowering him. Krishna then tells Kaliya to leave Vrindavan and the river and never return. www.tell-a-tale.com
Lord Krishna is adored by children and grown-ups alike in India. Here are 5 stories about the lovable God that children love listening to.