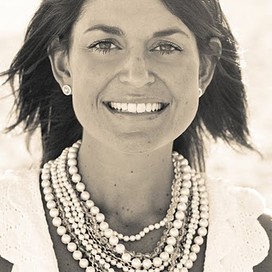 Your Life in Bloom!

The week of January 28th

Your Life in Bloom!

The week of January 28th

"Winners take Imperfect Action while others are perfecting their plans." - Kevin Nations 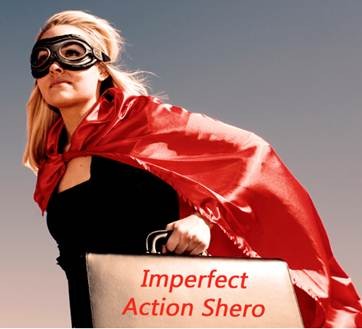 Have you ever thought to yourself..."I need to go print out the words to say doc, practice for a while, craft my email, create my BIG list, to do all that I'll need at least a couple of hours...I don't have 2 hours right now, so I'm going to work on that later (when I can complete the project thoroughly )..when I have the allotted time." THEN... 1 week, or 1 month goes by before you have that 2 hours...and the momentum is lost, and the booking idea has lost it's luster

Being inspired to want to book 2 more, just literally going thru your phone contacts or quickly skimming the invoices of your last 2 trunk shows AND just picking up the phone and sharing your excitement. Not overthinking...just letting your enthusiasm spread:).

The latter...is how you'll build a business...trust me, I've been both of those people and I've learned...it's never going to be perfect...I just need to start acting :).

The trick to success, especially when you're trying something new, is taking imperfect action. Here's exactly three reasons why:

The people who get stuck in the "wait til it's perfect" trap believe there's one and only one chance to "make it." Taking imperfect action says, "There's always more chances!" And there are!

2 - When you take Imperfect Action, you're discovering yourself, not waiting to be discovered.

So many people are waiting to be discovered, approved of, noted, validated - always by someone "more important" than they are. Taking imperfect action makes you discover yourself. Once you realize that being unstoppable is simply about taking the next step, then you have absolutely no need to be discovered. Any validation that comes is like icing on the cake.

3 - When you take imperfect action, you learn that there's no such thing as failure.

If you do something imperfectly, and you "fail," then the lesson is to try again imperfectly. See how liberating this is? If you like to tell people or yourself that you tried and failed, then it's time to take imperfect action again!

So, let me ask you something...

What idea have you been putting off, waiting until you (and it) are perfect? What's your next imperfect action step?

Here's what I'm focusing on this week... I challenge you to take 3 on the list and take imperfect action over the next hour. That's right... NO EXCUSES... just jump in and then post on our Facebook page the 3 actions you took...and how it made you feel :).

1. Register for any of the training calls this week, posted below. You're not in this alone, and these calls are designed to help you, not just everyone else - take advantage of them!! Make that an appointment on your calendar. We know you probably won't have time for them all, every week...who's NOT busy?? But do yourself the favor of trying to at least attend one to get you motivated in whatever area you need the help.

2. SDU - when's the last time you poked around in SDU to find all the fantastic new training videos that have been created in the last few months? You don't have to watch everything at one time! Again, jump in and pick just one topic - BOOKING, for example, and watch/read what's available. We all say we know what to do...but why aren't we doing it? SDU gives you the encouragement to take imperfect action and GO FOR IT!

3. Challenge yourself to book 2 more trunk shows for February! NOW is the time to pick up the phone. I have been focused on booking this past week...every time I thought about someone, I literally just texted them a pic of the new spring line..then picked up the phone and dialed to share my excitement. I have a goal of 3 by the end of the week...I've booked 1 and have 2 more tentative I'm waiting to hear back on. I'm not waiting for them...so I'm still reaching out. My goal has been 5 a day the last 3 days...so I've reached out to 15 and am feeling pretty good about my results. Why would someone want to book in tight and host a trunk show in February...fabulous trunk show treasures for Valentine's Day AND still be one of the FIRST to debut the new spring collection with all of your friends and family. People were LOVING the new line at my trunk shows last weekend, and they were happy to get out after so much family time :). Be prepared for the objections (you'll get some) and respond with confidence.

4. Share the opportunity! Keep it simple! Share why you signed up, why you LOVE it, why you think being a stylist could work for them. Then just listen and have a conversation about it :). With Glam Getaway going on now, if there were ever a time to sponsor, NOW is the time SO don't delay! Play a game with yourself...challenge yourself (find someone who wants to partake with you) and start talking about. Post on our team Facebook pages who your are reaching out to and what kind of results you are getting.

5. Hostess Coach your February hostesses..share your excitement. Can't wait to debut the new line with them..oh, and btw, if you are interested, we're growing so quickly and need more stylists. We can chat more about it at your show..but for what it's worth, I think you'd LOVE being a stylist and be really great at it". Leave it at that...and then you can chat again about it at her trunk show :).

There you have it...these are the things I've focused on the last 3 days..and invite you to join me. It's going to be a CRAZY, AMAZING 2013...and I can't wait help you make exactly what you want of this business


You are in business FOR yourself, not BY yourself! Training/coaching is an important aspect of your business! If you are wanting to grow and take your business to new heights, here are GREAT ways to do it!

For more details on the Home Office Training calls, visit the Stylist Lounge. This is your go-to hub for all the training you want and need, no matter your goal!

Tips from the Top

Tune into this week’s Tips from the Top call with Star Stylist, Barbara Ellis to hear her great advice on growing your business through Meet Stella & Dot Events. Hear how she’s challenging herself and her team to share the opportunity with as many people as possible in the next 30 days through hosting a series of MSD events. Barbara will share her tips and best practices on setting up an event, promoting it and making it a success! 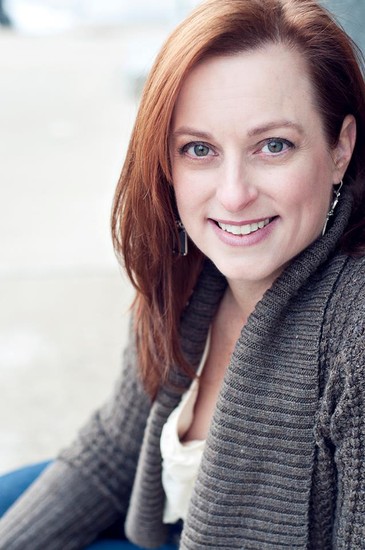 Hear what Stylists are saying about our Workshops:

"Thank you so much for this Clinic! It helped me realize that I am totally not using my hostess coaching and group hello time wisely.” Sarah Dickson Sr. Stylist from CA

In this Workshop, we'll discuss how to increase your Trunk Show average by implementing a few simple productivity builders and focusing on effective Hostess Coaching. If you want to maximize your dollars per hour, this is the Workshop for you!

In this Workshop, we’ll discuss the basics of Booking Trunk Shows. We’ll cover booking from scratch, building your Who Do You Know List, planting seeds at Trunk Shows and using the January Words to Say to book Trunk Shows with the new collection. If you want to maximize your bookings this month, you won’t want to miss this call!

This workshop will cover the casual 1, 2, 3’s of sponsoring. Learn how to plant casual seeds with your Hostesses, guests at Trunk Shows and your friends. Then hear how to have easy follow-up conversations to close the loop. If you’re interested in learning how to sponsor by habit, mark your calendar for this session.

Visit the Training Calendar in the Lounge for call in info and registration!

STELLA & DOT EVENTS TO MARK YOUR CALENDARS AND WORK TOWARDS!

I am so excited about Hoopla this year. This is a not to be missed event for any all stylists from someone in their jumpstart to Platinum Directors. You will have about a ton of Ah-ha moments throughot the few days of Hoopla. My favorite quote was from Star Director Carla Greengrass who said she came to Hoopla with a Hobby and left with a career. Fashion shows, team bonding, making new friends near and far and first class training from Jessica and Danielle- all in all so much fun.

Who wouldn't want a free trip to Mexico?

And in the process of getting yourself to Puerto Vallarta you'll be growing your business and your team and putting more earnings into your paychecks.

Indulge yourself with 3 nights at the beautiful Westin Resort & Spa in Puerto Vallarta! Beachfront pergolas, sparkling pools, and a serene spa offer head-to-toe pampering - exactly what you deserve! Pamper yourself with a margarita by the pool, or explore the area and the nearby shopping and dining in the marina.

Click here to hear Danielle's Tips to get yourself to Mexico.

* Send me your Hoopla Registration by end of day Friday and get a fun surprise in the mail sometime in February! We're going to have a blast!!!!!

We are going to do a Stella Stars booking blitz this Wednesday at 4:00 CST. Haven't done a booking blitz before? Well, no worries....here's how it works!

1) Mark your calendar from 4:00 CST to 5:15 CST.
2) Prepare your Who Do You Know List
3) Warm up your WDYK List! Use the Jan/Feb Success plan and the Words to Say..you can find this in the lounge!
4) Brush Up! Read pages 23-34 on how to have a Booking Conversation in your New Stylist Guide Magazine
5)Dial in on Wednesday for the 15 minute Rev Up Call...then you'll spend 45 min calling everyone on you list
6) At 5:00 pm CST dial back in for the wrap up call to share successes and ask questions!

There will be two prizes given away!! Whoever books the same number of shows that the Jolie/Pitts have children will be entered to win the JOLIE!!

Then we will draw for a pair of statement earrings from everyone that calls in! Looking forward to Booking with you on Wednesday!!! **If this time doesn't work for you, then do our own booking blitz and email me your results by Thursday at 12:00 pm CST!** 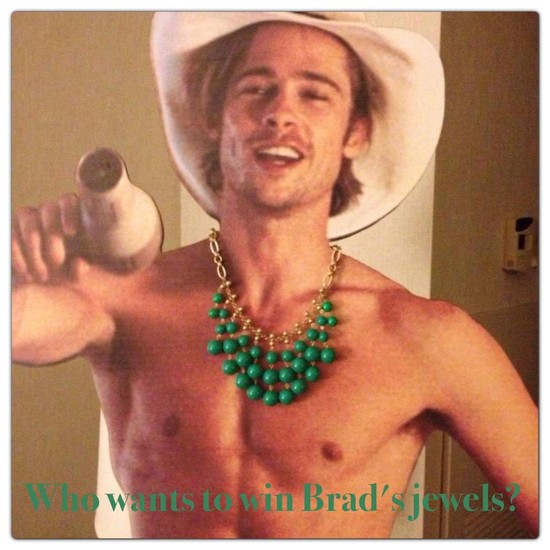