TECH OR TREAT! Join us for a fun day of FREE professional development and food!

Join us for a day of bewitching fun and learning at District 5's newest magnet high school. Come in costume to be eligible to win additional tech or treats! Lunch and snacks are provided. Sign up today! http://virtconlive.com/locations/Spring_Hill_High_School

Chirbit is a free website that allows you to store (up to 2 hours!) and share audio files easily in a large number of formats. Audio recordings can be uploaded or recorded directly from your browser using a microphone or webcam. Your awesome files can disseminated via qr codes or a link- or embedded into your webpage! Give this program a try- you won't be sorry. Here is one example of what you can do with Chirbit from Ginger Holdeman's recorded literacy library.

Check out this short intro-

PE teachers throughout the district are beginning implementation of Fitstat. It allows them to simplify their data collection and track students' fitness and physical activity. Students and their families are able to see progress throughout the year with this program. 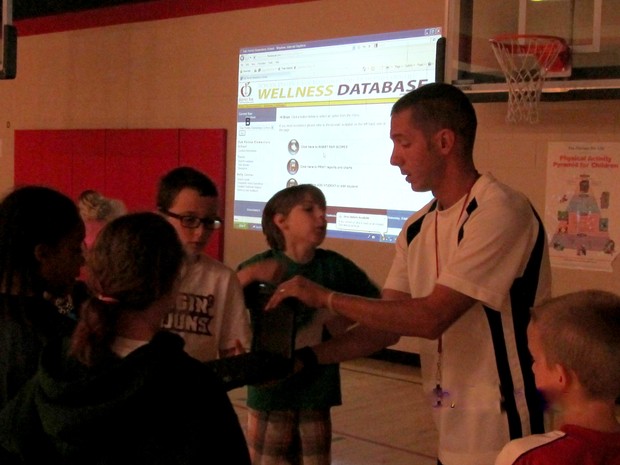 Students at Leaphart Elementary Celebrate "Talk Like a Pirate" Day!

Arg There Maties! Second grade students from Mrs. Toben's class use the iPads to complete a picture scavenger hunt. We placed 6 treasure chests around the school and students used the iPad and the app KlikaKlu to find picture clues of where the treasures were located. Once they found the treasure chest, the students had to match the image using the iPad app and if successful, they were given the reward of the math problem. Students had to solve the math problem before searching for their next treasure chest.

Mrs. Ussery's 3rd grade class played a Mystery Skype game with Mrs. Abernathy's 5th grade class in Pennsylania last week. A Mystery Skype is a game played over Skype where the classes take turns asking one another yes or no questions to try to guess the state, province, or city that the other class lives in.

The class had teams that had designated jobs during the Skype. These jobs included:

• Question Keepers – keep track of the questions and answers

and everyone in the class had a paper map to keep track of the possible location and to rule out states that the class was not located.

Prior to the Skype, the class brainstormed some good questions to ask that would help them to quickly narrow down the opposing team's location. Some of their questions included:

1. Does your state border the Pacific Ocean?

3. Is it very hot in summer and cold in winter/Do you have seasons?

4. Does your state border Canada?

5. Is your state in the Eastern part of the United States?

After about 10 minutes of back and forth asking great questions, Mrs. Abernathy's students guessed that that class was from South Carolina (they got a big clue when a student said "y'all"). But in the very next turn, Mrs. Ussery's students guessed that the other class was from Pennsylvania! So both teams guessed each other's location in the same number of questions. Next, Mrs. Abernathy's class shared their class pets with us- some lizards, a few chinchillas (including an adorable baby), and a ferret. That was a true highlight!

So, what did the students learn from the Mystery Skype? Obviously they learned about geography, but more importantly they learned problem solving, communication skills, about the culture of another classroom in another part of the world and they learned that learning is fun!

Do you want to try a Mystery Skype? Connect with other educators on the Skype in the Classroom- Mystery Skype page or search for the hashtag #mysteryskype on Twitter. 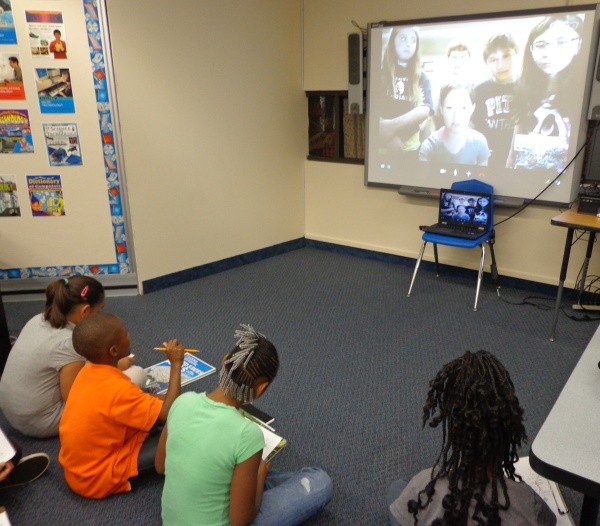 Mrs. Scully's 3rd grade students at RSES used the Chromebooks for the very first time to create a newsletter on a South Carolina Region. Students researched information about their region then created a newsletter using Smore.com.

Mrs. Schuver's 1st Grade students interacted with Google Earth to learn about their community location on a map and to compare their community to others around the world. First, students named the places they lived as Mrs. Schuver and Mrs. Ogen manipulated the Google Earth map to show the Earth, North America, The United States, South Carolina, Chapin, and Lake Murray Elementary. The students identified areas of playgrounds, parking lots, and the lake around the school. We then zoomed back out, reversing the process. Next, we zoomed to different countries (Canada, Germany, Egypt, China, and Chile) to view images of typical homes, schools, grocery stores, transportation, and even McDonalds to make connections with similarities and differences to the student's own community. 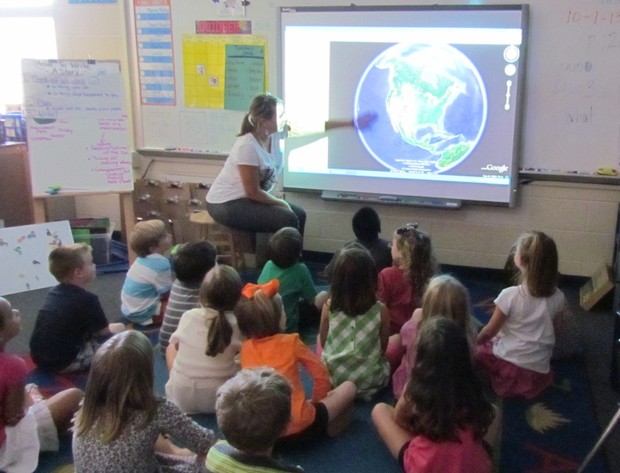 Teachers at Chapin Elementary Get a SMART Table

Kindergarten teacher Samantha Werts and First Grade Teacher Liz Wertz are the lucky teachers who get to use a SMART Table. With the SMART Table, small groups of students can communicate with each other to complete problem-solving and consensus-building activities on one interactive surface. Next month we will feature how their students are interacting with the SMART Table. Stay tuned... 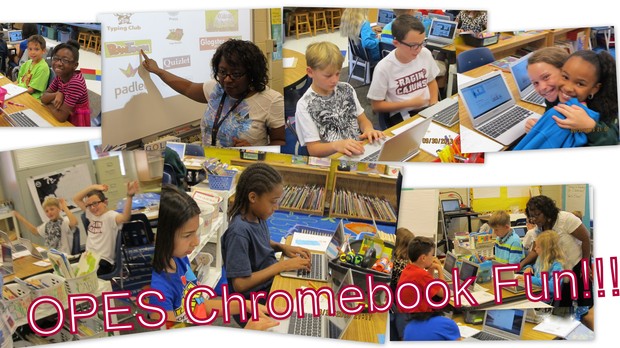 Oak Pointe is utilizing their Chromebooks to the MAX! Media Specialist Angela Durham has all third through fifth grade students using them during media lessons- and all of the fourth grade teachers have successfully logged their students into their Google accounts and are off and running on creating research projects using the Powtoons app! In addition, many teachers are using it for Edmodo and word processing. Notice the center student with his fingers in home key position. His teacher, Mrs. Johnson, awarded him several Barrel Bucks for his impressive habit.