Bridgett is using Smore newsletters to spread the word online.

Get email updates from Bridgett:

This was revenge for the boycott that happened in 1980. The boycott this time was a lot littler, but the soviet union was getting revenge because the U.S boycotted the Moscow summer Olympics.

14 countries refused to attend. Afghanistan, Angola, Bulgaria, Cuba, Czechoslovakia, Ethiopia, the German Democratic Republic, Hungary, Laos, Mongolia, North Korea, Poland, the Soviet Union, and Vietnam. Because of this there was not a lot of people who went to it, because they new it would be worthless because they wouldn't be getting to see a lot of athletes.
Get Directions

How does it relate today?

Nowadays we don't really have boycotts it mostly is something violent, like bombings. I don't really think it affects us anymore, The U.S new they had it coming. 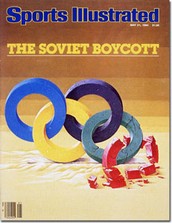 What can we learn from it?

I think something we can learn is that what goes around comes around and if we do bad things do them, there gonna come back and do something to us and we really can't be surprised by it

Bridgett is using Smore newsletters to spread the word online.