Pavan is using Smore newsletters to spread the word online.

Get email updates from Pavan:

What were the major issues facing the nation?

The economy was in shambles and Hoover did not cut short the depression. The banks were failing and the public was unhappy with the current state of the union.

Why did people vote for him?

Hoover was seen as a failure by the end of his term. The republican party nominated him again but there was no real chance he could win, FDR also had done enough good in New York that he was seen by many as a better replacement. FDR also proposed the new deal which people saw as better than Hoover could do. He also constantly blasted Hoover on his failures.

Did his election reflect the will of “The People?”

The election definitely reflected the will of the people because FDR won the popular vote and electoral vote by a landslide. 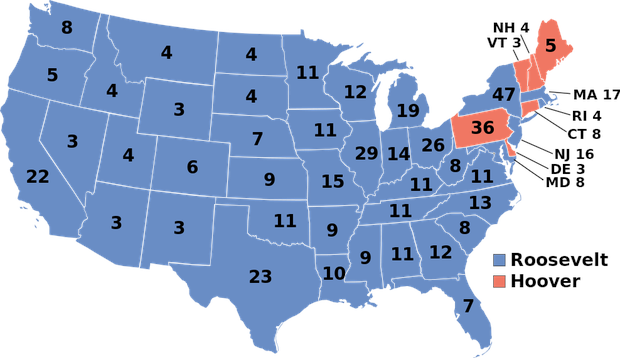 Why was the election controversial?

Most of the controversy came later on after the election. While roosevelt was a little harsh in his campaign, commonly attacking the fact that Hoover failed to get America out of the Great Depression, he was not wrong. His tactics were the only thing that was even somewhat controversial of this election. Another thing was that a lot of Roosevelt’s campaign was based around saying he could solve the economic crisis that was the Great Depression. He did end up doing it, but that was a risky claim than many found unrealistic. There was also some controversy later on about Roosevelt serving 4 terms, which is why the 2 term limit become a thing.

What did he accomplish?

In a nutshell, Franklin D. Roosevelt is one of the main reasons the people of the United States to regain faith in themselves. This spirit he brought into the whitehouse, and contributed toward the american people is the reason he managed to get elected for 4 straight years. Franklin Roosevelt did many things in these four terms. He declared defense against Nazi Germany with help from the British and the French. He was a big help in providing relief to the unemployed, He subsided mortgages. Managed to increase supply flow to Russia, Britain, and France during World War II. Also during World War II he established the Good Neighbor policy with Latin America, which improved relations between the nations. Through all of these he also helped America dig it’s way out of the Great depression, which is the main reason he was considered such an amazing president.

What connection is there to the current election?

The economy is in huge crisis, we are in so much debt it is almost inconceivable. We can easily compare this to the fact that the Great Depression was just starting at the time of the election of 1932. Both were times of economic failure, and what were the candidates going to do to save it. They were both very prominent, if not the most prominent issue in the elections of their times. Another thing was the attacks toward candidates. This whole election has been more about Hilary and Trump insulting each other and pointing out each other's weaknesses more than anything else. This was actually very prominent in Roosevelt's Campaign against Hoover. He would constantly bring up the fact that Hoover could not get us out of the depression in his last term. It was the main attack of the campaign, and one of the biggest reasons that Hoover was blow out of the water by Roosevelt.

Pavan is using Smore newsletters to spread the word online.