You Are A Man If You Sail

@Ferd
Ferdinand Magellan was born in 1480 in Portugal, as a kid he studied navigation and map making. After the deaths of his parents he studied at the Queens Lenora School of Pages for map making. In 1505 he went on a Portuguese fleet to find new areas and other countries. Then in 1513 he was injured on a voyage and was accused of trading illegally which held him from doing special voyages. In 1517 Magellan fled to Spain to offer his skills and find a new trade route, due to the Treaty of Tordesillas which helped Portugal find more land. On September 1519 Magellan showed his plan to make a new trade route which they first set sail on September 20, 1519. In October Magellan fleet sailed through the Strait of Magellan, March 1521 the anchored in Guam. Later in March they made it to Philippines which he befriended Humabon the leader of Philippines which Ferdinand died in a battle there in 1521, his sail made back to Spain 1522.
Portugal Ferdinand@gmail.com 565-9898-5000

My name is Ferdinand Magellan, my parents have been dead since I was 10 years old, Portugal has betrayed me and now I am sailing for Spain. I am trying to sail west to make it to the Indies, on September 20, 1519 we first set sail. We have been on this voyage for months, it took us one month to sail through a strait in South America. Our conditions on the voyage are horrible and we have to eat rotten biscuits. The smell of urine is all over the ship and we are about to starve to death. Its March 1521 and we have landed on a place called Guam which we settled here for about a week. Then later we made it to a place called the Philippines and we are doing good here. I have found Magellan's journal here on this ship, but it is September 17, 1522 Magellan died in a battle against some natives. Our voyage was rough, but Magellan was a great leader. 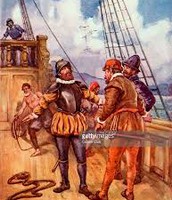 This was the ship they sailed on and went through

This is the route that Magellan used to circumnavigate.

This was the type of the conditions they sailed through