Reccy is using Smore newsletters to spread the word online.

Get email updates from Reccy:

By Reccy and Talia

By Reccy and Talia

East Asia consists of six countries, China, Japan, Mongolia, North Korea, South Korea, and Taiwan. Taiwan is actually considered a de facto country. That means that the country is not legally recognized by other countries.

On the eastern side of The Sea of Japan sits an archipelago that stretches out about 1500 miles. There are 4 large islands and thousands of smaller ones. this area is known as Japan. The Japanese islands sit along the ring of fire, which makes the country one of the most eathquake prone areas in the world. One of Japan's well known symbols, Mount Fuji, sits on Japan's largest island at over 12,300 ft tall. Though it hasn't erupted in over 300 years, scientists believe that it will erupt in the future.

In East Asia, bodies of water provide food, places to live, modes of transportation, and places for power factories. There are many rivers in the region, but the two most important are called the Huang He or the Yellow River and the Chaing Jiang or the Yangtze. Both of these rivers begin high on the plateau of Tibet in southwestern China and they flow down the eastern slope of the plateau.

The Chang Jiang is the third largest river in the world and the largest in Asia. It is 3450 miles long. It is a principal waterway. it provides water for fertile farming and a home in the basin for most of the people in the region.

The Huang He picks up yellow-brown silt called loess as it streams down its path. This silt gives the river it's color, hence the nickname "the yellow river." Th silt deposited by floods created a plain called the North China Plain where most productive farming areas are located. Though these floods have helped the area, this river has also been nicknamed "China's Sorrow" because these floods are also known to destroy homes, drown people, and ruin crops.

Until th 1900's, emperors and empresses ruled China in dynasties. A dynasty is a line of rulers from a single family who would rule until overthrown. The Han dynasty was one of the more powerful dynasties. People today even call themselves "people of Han." With the Han's rule came unity and stability. Arts and scepiences became more popular. Paper making was invented. This is when records began being kept. The Han also began the building of the Great Wall of China. The wall protected invaders from the north 2200 years ago. It has been rebuilt and lengthened many times over the years. It is now about 4000 miles long. 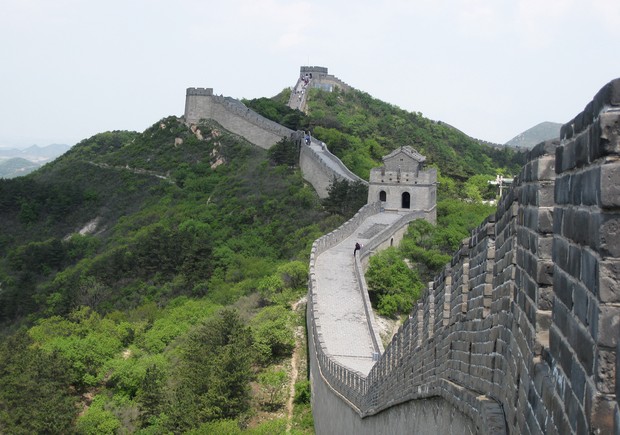 In 1552, a Portuguese ship that had veered off course docked in Japan. More people, traders, and Christians began coming into the country. Japan feared that Europens were planning to take over the islands. Because of that, Japan isolated itself for 200 years and cut off all communication to all other countries until 1884 when US Naval officer Matthew C Perry encouraged Japan to end their isolation. When they did, they saw that European and American countries had become very advanced in technology. Leaders of Japan then did aged their time to learn about how to become stronger than the other countries. In time, Japan has transformed into an industrial & military power empire. In 1940, Jaoan gained control of Taiwan, Korea, and the Pacific Islands. That lead to WWII.

After the war, East Asia underwent many changes.

after 1949, China became "two China's." On the mainland lived the communists and on the island of Taiwan was the Nationalist government. The Great Leap Forward program began in the late 1950's to increase the industrial output in China. Many people left the fields to start working in factories. In the 1960's Taiwan wanted to bring together the separated China's. That didn't happen until 1976.

Japan was stripped of it territories and military might after the war. They became a democratic constitution. Women and workers gained more rights and they built themselves up to have a great economy. They're known to have one of the strongest in the world.

A mix of different religions and beliefs is common in east Asia. Chinese people usually practice a combination between Buddhism, Daoism, and Confucianism. Eventually the government began eliminating religious practice. In Korea and Japan usually the main religion is Buddhism. The combination of Buddhism and Shinto is followed by Japan also. Christianity in South Korea has a strong presence.

In Korea, China, and Japan many artist painted the landscapes of their countries. Since ancient times, weaving, carving, and pottery has become big in East Asia. Literary traditions were big in Japan. They often wrote haiku poems and more. Japan is also known for animation today. Musical theater is major in China. They have many traditional plays.

Reccy is using Smore newsletters to spread the word online.