Rawan is using Smore newsletters to spread the word online.

Get email updates from Rawan:

Is It the Greatest Country to Live In?

Is It the Greatest Country to Live In?

Many Canadians would tell you that they are very fortunate to live in this country. With free healthcare, beautiful landscapes and high education rates, the overall quality of life in Canada is spectacular. But other than the beauty of this country, what factors does Canada have to offer to be the greatest country to live in?

Demography: Canadian demographics play a crucial role in showing us past and current trends and preparing for future developments. It helps us understand Canada’s current growth in population and whether it is in the developed stage which helps determine the quality of life in Canada. Canada’s birth rate is 10.29 (2014) and the death rate is 8.31 (2014). Canada’s death rate has decreased over the past few years because it has become a developed country sitting at stage 4, meaning the improvement of health and technology has increased.

According to the “World Health Organization’s Ranking” (2000), Canada is ranked 30th in the Worlds Health System. This tells us that Canada’s improvement in modern medicine, nutrition and public health has not only decreased the death rate, but it increased the life expectancy as most females can live up to approximately 84 years and males can last at approximately 79 years (2014 Canadian Demographic Profile). The increase of life expectancy has showed that Canada has a better quality of life than a country such as China because Canadians have become more aware of their health by eating right, medical assessments and doing daily exercises. Our country demands better quality of life by looking at our mistakes from the past and improve them and advertising recent medical discoveries or research.

Canada is in Stage 4
Immigration: Canada is known as a host country for many immigrants worldwide. Each year, around 250,000 immigrants come to Canada. Canada is considered to be a safe haven for immigrants that are seeking for a better quality of life and opportunities. The immigration system is Canada’s most successful system. Unlike other countries, Canada has a point system that helps determine who’s more eligible to immigrate to Canada. They choose you according to the categories such as skilled worker, refugee, business and many more. Canada’s immigration point system accepts and provides immigrants with jobs, protection and shelter. Accepting and welcoming immigrants shows that Canada is open to many races as 56.9% come from Asia and 13.7% come from Europe (2009-2011) . Not only does immigration benefit the society but also Canada’s economy and education rate. Around 40% of immigrants have achieved a university degree and even achieve higher than a Canadian. Also, as Canada does trade worldwide, diverse workforces help ease businesses to do world trade because it requires skills and awareness to help communicate and undertake business dealings. It is Canada’s job to make sure that immigrants are accepted and provided with the resources they need that they did not have from their previous country.

Place of Birth of Immigrants

Canada, the world’s second largest country in total area is not only socially diverse, but its seven landform regions also make it physically diverse. Every region has its own landform, climate, natural resources and many were formed the same way whether it is from the movement of plates, erosion and the rock cycle. What’s good about this is that the different regions gives people the opportunity to choose where they would want to live whether it is the Great Lakes that has large bodies of water, the Innuition Mountains that is located in the Northern region or the Interior Plains that is covered mainly in flat land which is great for farming businesses. Each landform region provides natural resources making it profitable to live in. For example, many areas in the Interior Plains are great for farming and also business. It is very rich in grain production which increases the growth of wheat. This landform region is successful in the industry field and residential field. Canada gets to experience all 4 seasons. Each landform region has a specific climate that influences the amount of activities available for the people to participate in. 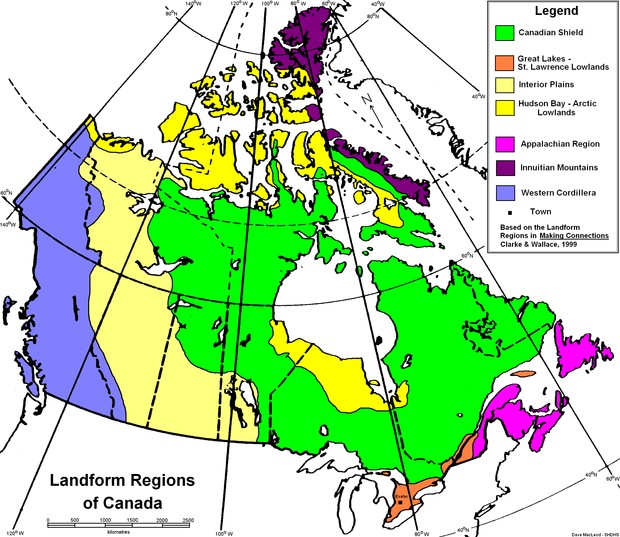 Resources are an important aspect of a country because they provide necessary supplies that humans need to thrive and it contributes to the growth of the economy. Canada has a vast wealth of natural resources. Out of the three industries which are primary, secondary and tertiary, the primary industry plays a critical role in the country’s economic growth and job opportunities. In 2014, natural resources accounted for 20% of Canada’s GDP. In the same year, natural resources accounted for 1.8 million jobs in Canada. It also plays a significant role in Canada’s exports since in 2012, 52% of all exported goods were raw materials. The secondary industry which is the manufacturing industry, is responsible for 30% of Canada’s overall exports in 2012.

Other than the primary industry, Canada is known for its tertiary industry also known as the service sector since it employs around three-quarters of Canadians. The largest employer is the retail business as it employed almost 12% of Canadians. Since the tertiary industry is Canada’s leading industry, it recognizes Canada as a developed country because of its job opportunities, health care system and advanced education system. Another contributor would be NAFTA (The North American Free Trade Agreement) which is an agreement among the US, Canada and Mexico designed to remove barriers (taxes) between the three countries when importing and exporting goods. The trade between the three countries has increased to 1.14 trillion in 2015 because it eliminated tariffs which helped boost Canada’s economy. In the first five years of NAFTA, it has helped produce over 1.8 million jobs in Canada. With trade increasing, it creates the demand for people to work because more products mean more work, which means more jobs. With an increasing economy, the availability of resources and good relationships between other countries, Canada has a better and higher living standard than most other countries.

Contribution to Total Employment in 2014

This data shows how resources contributed to employment in 2014.

This data shows the difference between the growth of the industries in 1951 to 2000.

It’s hard to keep up with Canada’s rapid growth as many areas are urbanizing into developed cities. Canada is working on making everything more convenient and not creating isolated communities. The country needs to constructed in a way that encourages human interactions and sustainability for future generations. The main issue Canada is working on is urban sprawl because cities are becoming too congested that people move farther away to areas with cheap land and low taxes. People living outside the community are having trouble commuting to work causing stress and obesity to increase because of the long minutes you are stuck in a vehicle. In 2011, 65.1% of commuters drive to work as a single driver. Seeing this issue, Canada is planning a system that people could benefit from such as building a transportation system that would decrease the amount of time it takes to commute to work and the stress levels. Also, to reduce the amount of land being used, Canada has been constructing upwards (upward expansion) rather than downwards (urban sprawl).

Canada is also responsible for making communities more sustainable. For example, Montreal has a rooftop garden company called Alternatives, where they focus on using unused space such as rooftops, balconies, etc. to develop green space. The idea behind it is to do a simple model of food production that will save space and make food that is affordable to deal with increasing urbanization and pollution. This is a perfect example of how Canada is taking action to encourage reusing and make communities more sustainable. Canada continues to urbanize areas into sustainable and human interactive cities.

Modes of Transportation to Work (2011)

This data shows the percentage of vehicles being used in 2011.

One of the Alternatives projects in Montreal.
Its incredible to see how Canada went from a huge land of opportunities to the worlds 2nd best country to live in. It may have some cons like any other country, but it is considered to be the most beneficial for people who are thinking of living in a new country. Overall, it is a country that offers something good in all aspects. Whether it is the land of immigrants, different landforms, natural resources or it is a developed country, Canada is a spectacular country that has a better quality of life and reassurance that is worth beginning your new life in.

Rawan is using Smore newsletters to spread the word online.