Brandi is using Smore newsletters to spread the word online.

Get email updates from Brandi:

Chinese holidays are always a fun event for the friends and family to get together and have fun.

Small red packets are given during the spring festival and usually contain money, or letters of luck to your loved ones.

Foods are always a big part of Chinese festivals.

Moon cakes are made and eaten during the moon festival. Family's will buy one according to how much they can send then spilt it apart between each other. Older family members are always first to eat.

Origin of the moon festival

The Chinese have celebrated the harvest during the autumn full moon since the Shang Dynasty (c. 16th to 10th century BCE).[5] Morris Berkowitz, who studied the Hakka people during the 1960s, theorizes that the harvest celebration originally began with worshiping Mountain Gods after the harvest was completed.[6] The celebration as a festival only started to gain popularity during the early Tang Dynasty (618–907 CE).[1] One legend explains that Emperor Xuanzong of Tang started to hold formal celebrations in his palace after having explored the Moon-Palace.[5] The term mid-autumn (中秋) first appeared in Rites of Zhou, a written collection of rituals of theWestern Zhou Dynasty (1046–771 BCE).[1]

Empress Dowager Cixi (late 19th century) enjoyed celebrating Mid-Autumn Festival so much that she would spend the period between the thirteenth and seventeenth day of the eighth month staging elaborate rituals.[7]

For the Vietnamese, in its most ancient form, the evening commemorated the dragon who brought rain for the crops.[2] Celebrants would observe the moon to divine the future of the people and harvests. Eventually the celebration came to symbolize a reverence for fertility, with prayers given for bountiful harvests, increase in livestock, and human babies. Over time, the prayers for children evolved into a celebration of children.[2] Confucian scholars continued the tradition of gazing at the moon, but to sip wine and improvise poetry and song.[2] By the early twentieth century in Hanoi, the festival had begun to assume its identity as a children's festival.[2] 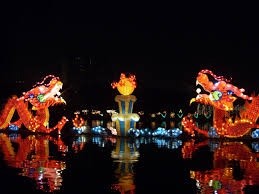 Brandi is using Smore newsletters to spread the word online.

Follow Brandi Moore
Contact Brandi Moore
Embed code is for website/blog and not email. To embed your newsletter in a Mass Notification System, click HERE to see how or reach out to support@smore.com
close