Al Capone was the son of Teresina and Gabriel Capone. He was born into a family of 8 children on January 17, 1899. The family lived in italy and immigrated to Brooklyn, New York. He went to a public school at the age of 7. When he was in 6th grade he got in a fist fight with his teacher and was expelled from school.

Al Capone was just a kid when he heard about a neighborhood bully that took an elderly woman's washboard. AL Capone found the kid and organized a street gang to beat the kid up. He took the washboard back to the lady and held a parade to get a good reputation for himself.

One of Capone's worst crimes was the Valentine's Day Massacre. He rallied his thugs and tricked a rival, Bugs Moran into meeting them in a warehouse. Capone's men dressed as policemen and Moran's gang thought it was a raid. They surrendered their weapons and Capone's men began shooting them at point blank range.

Another one of Al Capone's many famous crimes was labeled the "Dinner of Death". Capone asked three of his own men, who he thought had betrayed him to dinner. After dinner, Al beat them all with to death with a baseball bat.

In the "Big House"

Al Capone was sent to Eastern State Prison. He was convicted of carrying a concealed weapon. While in the state prison, he was able to run his empire and stayed in a "luxury" cell. He brought in lamps, couches, a music player and more. Capone did not follow the rules at the state prison and was sent to Alcatraz shortly after being convicted of tax evasion. He served 17 years at Alcatraz. 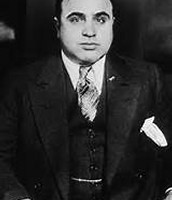 While Al Capone was in prison he was suffering from syphilis. This disease caused Capone to have sores on his skin. Capone's health went down hill quickly. The syphilis caused him to have a stroke. He was transported to a hospital where he had a heart attack and died. He died January 25th, 1947. Capone is buried at Mount Carmel Cemetery in Illinois. 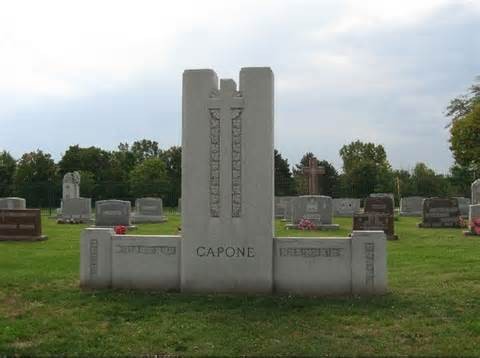