Krish is using Smore newsletters to spread the word online.

Get email updates from Krish:

Secrets of the Shaft

The most amazing hall in the Lascaux cave is the Shaft

Secrets of the Shaft

The most amazing hall in the Lascaux cave is the Shaft 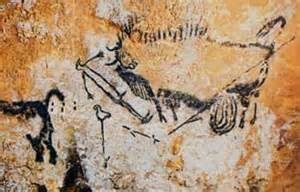 Isabel researched about "Why we cannot go in the cave?"

Can you believe we can’t go in the Lascaux caves anymore; here’s why. In the first place when we breathe in there it ruins the paintings. The carbon dioxide that we breathe is deteriorating the paintings. Also, even though the made a replica a white moss started growing and soon it went onto the actual cave. This made it hard for people to breathe and it affects the paintings. Finally crystals and lichen started growing in the cave because they put air conditioning in the cave! This caused the paintings to start fading. As you can see there are many reasons why we can’t go in the Lascaux caves anymore.

Matthew researched the "Wounded Man" panel in the Shaft

The Lascaux Cave has a mysterious and different room from the rest called The Shaft! For instance, The Shaft has the least amount of paintings of all the halls, only eight in all! This may mean that The Shaft must have been painted later and than the other halls and may not be complete.

Furthermore, The Shaft has a large panel with a painting of a man battling a bison along with a bird perched on a stick. That is the only picture of a man in the entire cave because paintings of paleolithic man are rare.

Finally, The eye of the man, the bird and bison may depict the three stars in the summer triangle: Deneb, Altair, and Vega. This could mean that the Paleolithic people could have been ancient astronomers! In the end, The Shaft is a truly different and amazing hall from the rest of Lascuax.

Krish researched the secret of the Shaft

In France there is an ancient cave with secrets many centuries old called the Lascaux. Did you know, the Shaft (one of the halls in the cave) is known as the heart of the cave because you have to go down a narrow passage to get there. The painters had to go down a hole to get to their painting area! Also, the paintings were created over 17,300 years ago. It is amazing to know people lived that long ago. In addition to that, according to scientists, the paintings in the Shaft might represent different stars! The Magdalenian people might have known about the secrets of space. In conclusion, there are many unbelievable facts about the Lascaux cave that are yet to be discovered.

Krish is using Smore newsletters to spread the word online.