Knowing about men's fashion during the Renaissance may interest history buffs, fashion students, historical actors and anyone who wonders just how men dressed long ago. The fashions were much fancier than what men commonly wear today. Shirt sleeves were typically wide and billowy with an open neck. Rich men wore materials such as cotton, satin and velvet, while the poorer classes made do with flannel or other cheap fabrics. Another piece of clothing worn on the top half of the body is known as a doublet. This piece of clothing is similar to a vest, but with cap sleeves or wings. Laced in the front and perhaps the back as well, it could fit a variety of body sizes. Doublets were worn over the billowy shirts and were worn with belts. The richer a man was, the fancier his doublet was, so that noblemen wore them in rich brocade patterns, quilted or with embellishments. They also wore a jerkin which was similar to a doublet. The main difference was that it was worn over the doublet and had no sleeves at all. Peasant men wore loose-fitting pants, or trews, which tied at the waist and laced around the lower leg. They were made of cheap materials. Noblemen, on the other hand, sported breeches, also known as Venetian breeches, that were roomy and loose. Men also wore "trunkhose" or "slops," which are the puffy garment common in depictions of this era. The onion shaped trunkhose had panels or slashes that sometimes revealed a contrasting colored fabric underneath and fit a man from his waist to his knees. No one had zippers. All pants fastened with button closures.They wore ruffled collars.

A Man During The Renaissance

During the renaissance the men wore doublets. 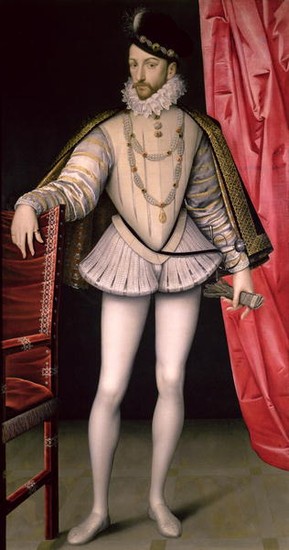 Prior to the Renaissance, men's shoes featured an elaborately long toe. For practical reasons, this style fell out of fashion and men's shoes became simpler in style, like slippers. Men's shoes often incorporated a design technique called slashing, cutting openings in a top layer of fabric to reveal fabric of another color underneath. Gradually, the slipper style evolved into a "duck bill," or wide-toed style. Boots weren't considered fashionable footwear during the Renaissance and were worn only for outdoor farming and sporting activities. These boots were called buskins and were knee length and loose fitting. Eventually, heels were added to boots worn for horseback riding -- the heel kept the boot from slipping through the stirrup.

Gloves – Every Renaissance man needs proper gloves. The hands tend to draw the most attention of all as he strikes a pose. Look at the make and style of gloves he wears while telling a great story, when preparing to fight, or during a sitting for a portrait.

Belts – The most functional of Renaissance accessories for men is the belt. Not just a glamorous piece of beaten leather, the Renaissance belt keeps a nobleman’s trousers aloft, maintaining his respectable presence. A modern belt would be anachronistic, and ruin the effect that a matching belt would provide to the authenticity of your Renaissance costume.

The initial costumes did restrict freedom to move around. Women wore around 5 layers of clothing. This included the skirt, bodice, vest, underskirt and the collar. Wedding dresses during this period were particularly beautiful in their appearance and were made of brocades. Exquisite jewels were sewn onto the patterns. Many layers of clothing thus formed an important factor of Renaissance clothing for women. This was probably considered as a way to keep the body warm during the cold weather. Women's clothing also consisted of a kirtle, which was worn with a gown. The term kirtle means a frock. This frock consists of a tightly fitted bodice and a flowing skirt. Sleeves were often wide and the rich loved to line their sleeves with fur. Gowns often had long trains of cloth behind. This was on the similar lines as the clothing seen in the Medieval era. Women also used to take a long time to get ready due to the number of layers involved in the clothing. During the Renaissance period, it was particularly noted that Queens wore gowns made of purple color. 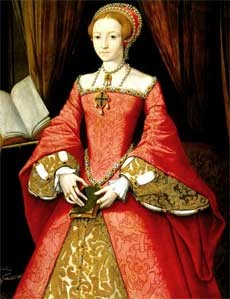 Women's dresses were made of opulent fabrics, including brocades and silks, and the shoes were created from the same materials. Often slipper-like in appearance, these shoes weren't waterproof, which lead to protective footwear that became fashionable, as well as functional. Women wore an overshoe called the patten, which, for wealthier wearers, was made of the same fabric as the shoe. The chopine, a kind of prototypical high heel, was introduced during the Reniassance. Like the patten, it was an overshoe originally worn to protect the foot from rough terrain and inclement weather. However, the shoe soon became a status symbol -- the higher the heel, the higher the status of the wearer.

Headpieces – What sits on top of a lady’s head helps define her status. She can be defined by every headpiece from the dainty tiara of the Renaissance princess to the Sarmatian headpiece for the Eastern Renaissance lady. Choose a headpiece that declares your status, whether it’s peasant, pirate, princess or anything in between!

Renaissance – A lady’s Renaissance costume is always completed with her choice in Renaissance jewelry. The process of selecting Renaissance accessories starts with the necklace, be it a choker, pendant, or jeweled chain. Next, work down the arms to pick out the bracelets, bangles or cuffs to wear. Finally, choose your Renaissance earrings

First and foremost to bear in mind, everyone wore a hat in public. It was, indeed, against the law for men or women to appear in public without their head's covered. Fines levied were ruinous (up to a week's wages for each offense).

While styles of hats varied, common amongst the commoners of the time were the "flat caps" which had been in use for much of the Tudor reign. These might be made of wool, felt, or leather, and could be lined with linen.

Amongst the nobility, tall hats similar to a modern top hat, but featuring a tapering crown, or an arched brim hat might be popular amongst both men and women. Italian style "bonnet" hats also were popular during the period, and any of these hats could be made of a fine fabric over a frame of linen stiffened with gum. Leather was also a popular material for the construction of fashionable hats. 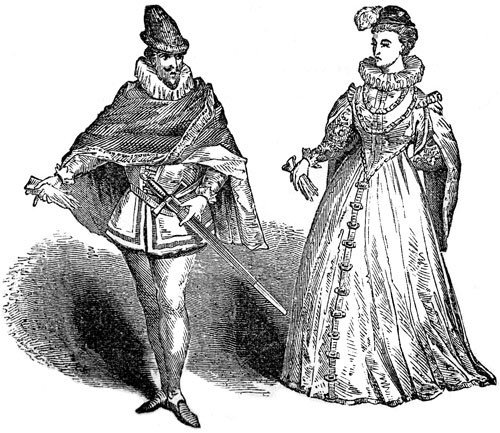 Follow Sydney Freeman
Contact Sydney Freeman
Embed code is for website/blog and not email. To embed your newsletter in a Mass Notification System, click HERE to see how or reach out to support@smore.com
close