All schools are closed until April 24, maybe longer 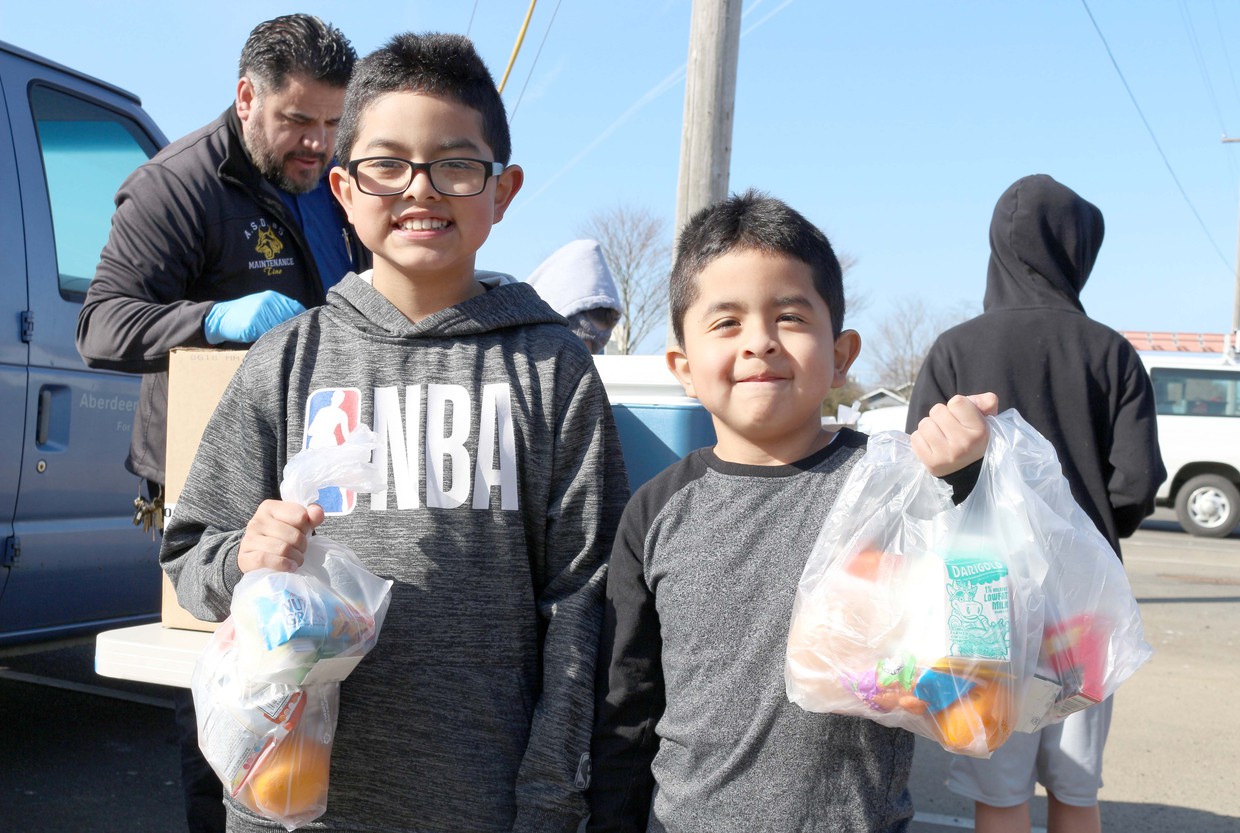 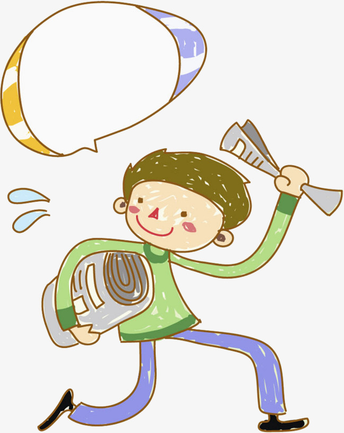 Your E-News will be delivered every Thursday

Governor Inslee announced on March 13 that all public and private K-12 schools in the state will be closed through Friday, April 24 -- and maybe longer -- as part of a massive effort to slow the spread of the novel coronavirus COVID-19 in Washington state.

There’s a lot of information flying around in all directions right now. We know it can be stressful trying to make sure you don’t miss the important bulletins and announcements. We will continue to share information by various means as it becomes available, but we also plan to include it in this newsletter every Thursday. We hope this newsletter reduces your stress and becomes a valuable resource – a place where you can find reliable information, important links, news and notices impacting our school community during the emergency. Please take care. 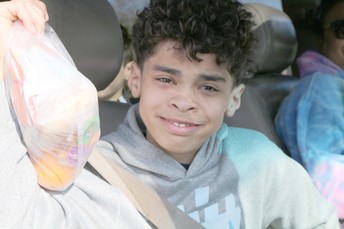 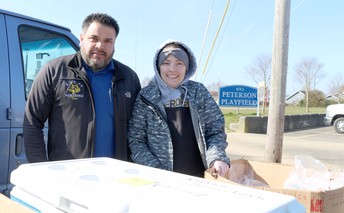 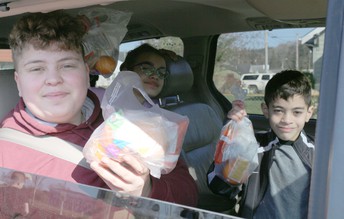 Two meals a day available to all students

Our Food Service staff didn't miss a beat following the governor’s announcement that schools must close. The first day of the closure, all Aberdeen students had access to two meals a day at five locations in the district.

These Grab’n’Go meals are available from 10 a.m. to noon, Monday through Friday, at:

Meals for Saturday and Sunday will be provided for pick-up during the Friday mealtime. All children and youth under the age of 18, and enrolled students over 18, are eligible to receive meals at no charge. ID is not required and there are no forms to fill out.

Lunch and breakfast are being provided to each student. The meals are designed to be picked up and eaten at a different location to encourage social distancing. Adults may pick up the meals, but they must be accompanied by their students.

The program is being enhanced as we learn student needs. For example, arrangements are being made to send a school bus up the Wishkah to a school bus stop to serve our remote students. And in Central Park, there will soon be a bus delivering meals to a stop on the north side of the highway for obvious safety reasons. More information about these new locations will be shared with the impacted families through the schools when it becomes available.

A printable pdf of the map below can be found at the end of this newsletter. 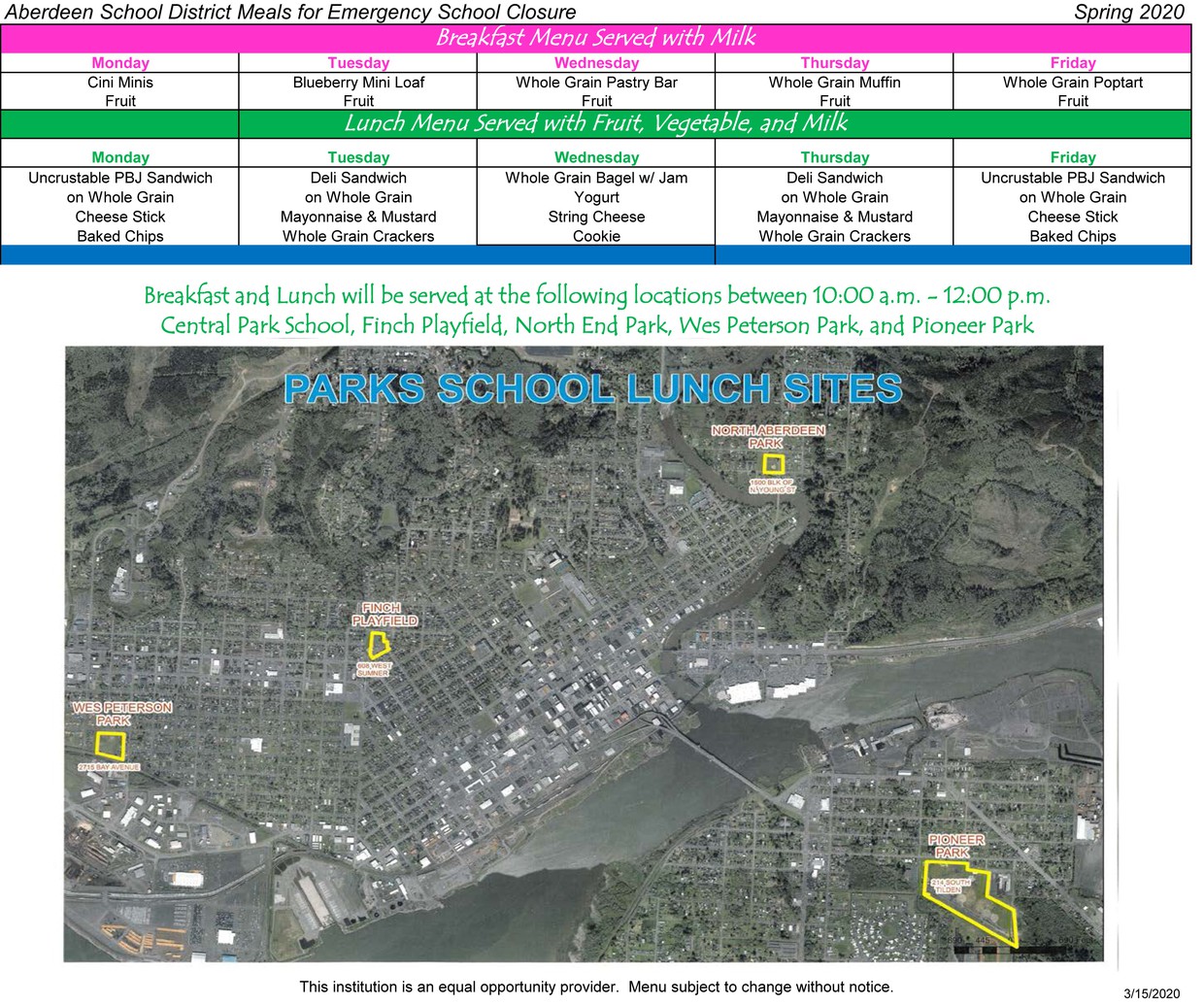 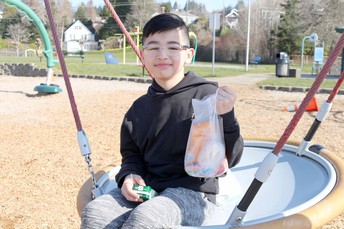 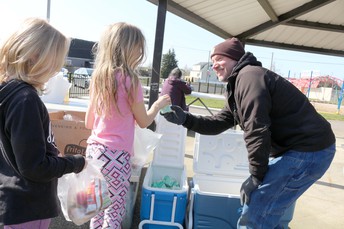 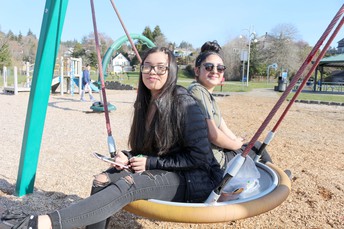 Our staff is working -- just in different ways

The district has created a page on the website where parents and students can access Instructional Resources for their grade level. These resources have been carefully chosen by our teachers based on what students have been learning during their school years.

These are not assignments, but opportunities to continue grade-level learning and remain remotely in contact with your teacher(s).

A suggested schedule is posted and is flexible to meet the needs of your family.

Most of these resources require a device and internet access. Chromebooks were checked out to students who had parent permission on Monday. If you were not able to access a device on Monday, please fill out the Device Check-out sheet and submit it via email to your student's principal. Please allow two to three days for arrangements to be made.

In order to access your child’s passwords, usernames and badges, please contact your child’s teacher through their district email. A reply should be expected within two school days as of Monday, March 23rd.

Teachers and staff are working

Teachers and staff are working during the closure – it’s just that their work looks different. For teachers, this means communicating with students via their district email. Teachers are back at work on Monday, March 23, and will be keeping virtual office hours from 8 a.m. to 3 p.m. Monday through Thursday. In addition to communicating with their students, teachers will be involved in a number of other work-related, professional development activities. Please encourage your student to use their district-issued email to communicate with their teacher(s). Social media is not an acceptable form of instructional communication between students and teachers.

Principals and program directors also are working during this time, but are not always in their buildings. Please communicate with them via email.

Please check the Instructional Resources page often for updates that may come about from OSPI, especially for high school students. 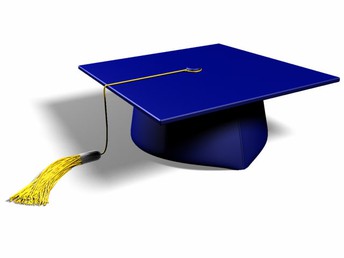 Please take a deep breath -- Your school wants you to graduate, too

This is a big one. Huge. We know how important this topic is to students in the Class of 2020.

Please continue to be patient for at least another week while the State Board of Education and Office of Superintendent of Public Instruction develop the guidance the high schools need to ensure our graduates meet any revised state requirements.

In one of its last acts before adjournment, the Legislature told the Board of Education to provide flexibility so that students who were on track to graduate at the time of the school closure are not held back due to the closure.

The best thing all students can do at this time is to maintain the connection to school by accessing the online resources provided by their teachers.

Meantime, here's a link to the Washington State Board of Education's latest statements regarding graduation requirements.

News from the School Board on March 16 and March 18

Our School Board conducted two important meetings this past week. Following the governor’s announcement that schools must be closed by Tuesday, March 17, the board moved its regular meeting to Monday and cleared the agenda to deal only with essential business – payroll, paying the bills and actions necessary during the emergency closure. This included adoption of Resolution 2020-02 Authorizing Emergency Suspension of Policy.

The resolution is intended to eliminate potential conflicts between board policy and reasonable actions that need to be taken to follow advice from OSPI and public health officials during the emergency.

The unprecedented closure of schools, and the strong recommendation for everyone to observe social distancing, prompted a special meeting of the School Board two days later, on Wednesday, March 18.

It was our district’s first online board meeting, and provisions were made for the public to log on and observe.

At this meeting, the board adopted Resolution 2020-03 Rescinding the Bond Election. This action postpones the special election asking voters to approve a bond issue to build a new Stevens Elementary School. Aberdeen is one of many districts in the state postponing ballot measures.

Mr. Koski wrote, “The results of the February election showed us that community support for a new Stevens Elementary School in South Aberdeen is high, with the bond for rebuilding

campaign activity and personal engagement to tip the scales. However, I believe that the

of Aberdeen Citizens for Schools and its volunteers to run the campaign as planned. As

a result, I recommend sending the Stevens bond back out to voters at a later time when

there can be a full and rigorous campaign in support of this very important bond.”

The board concurred and voted unanimously to postpone the election.

The next regular meeting of the board is scheduled for April 21. President Sandra Bielski noted that it is still during the mandated closure period, so stay tuned because the meeting could either be rescheduled or be conducted online. 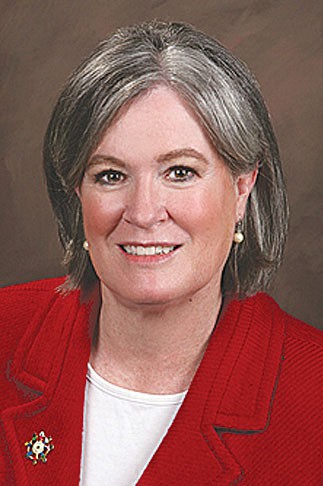 Superintendent Alicia Henderson announced this week that she has finalized principal positions for the 2020-2021 school year. They are as follows:

We look forward to sharing more information about each of these leaders in a future edition of the newsletter.

Also of note: David Glasier’s return to Aberdeen High School creates a vacancy in Human Resources. Christi Sayres will become the Human Resources manager reporting to the superintendent. The director position held by Mr. Glasier will not be filled. Lindsey Williamson will step into the HR administrative assistant position and her HR support position will not be replaced.

All are encouraged to review the superintendent’s latest budget report to the School Board and Budget Advisory Committee detailing the funding challenges that will be faced by our district next year due in large part to the levy inequity and inequity in the state's school funding model that favors larger districts in more affluent areas. 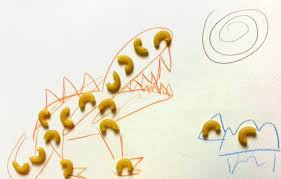 The governor has directed that our first responders and health care workers with school-age children should not be worried about daycare at a time when they are desperately needed at work. Our school district will offer child care to these essential employees beginning Monday, March 23.

Parents who are first responders or who work in health care are eligible to access this free service by contacting Superintendent Alicia Henderson at ahenderson@asd5.org. Arrangements are being made to operate at the Rotary Log Pavilion during regular school hours.

Visit the Coronavirus page on the ASD5 website for helpful links and updates from local officials regarding the outbreak of this new virus and how it's impacting the Harbor and our schools. 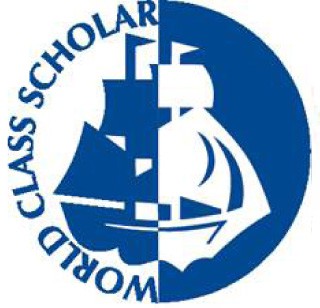 Attention World Class Scholars in the Class of 2020:

It's time to download and complete your paperwork so you can claim your scholarship.

Even if you are not planning to attend GHC, your school and the college would like to recognize all who qualify as World Class Scholars. Also, your scholarship can be used remotely and during the summer ...

You can find the information on the ASD5 website under the For Families tab. Reach out to the senior parent coordinator, Joy McGregor, as she is happy to assist students in completing this work.

WCS Senior Packet for Class of 2020

Find your World Class Scholar materials on the district website. 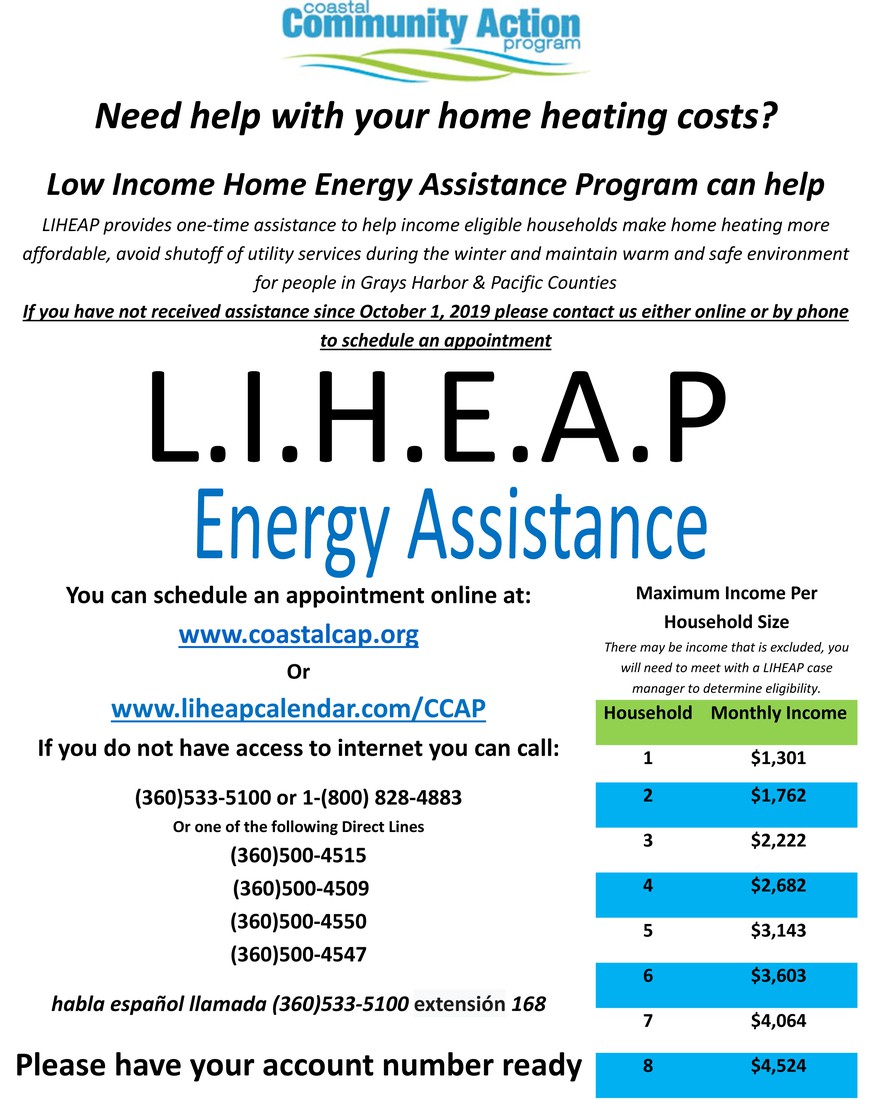 Print the map showing where school meals are available.

Parents should use this form to give permission and accept responsibility for their student to bring home a device.