Carnatic Music is a type of Indian Classical Music that originated in Southern India. This type of music along with other styles of Indian Classical Music has two basic principles, these being "raga" and "thalam". Raga is the preset scale of notes that basically determines the tune of a piece. In other words, the raga that a piece is composed or set to restricts the artist to sing or play only those notes (preset to the raga) for the duration of the piece. One example of a raga is Shankarabaranam which is set to the same tune as "Solfege", except in stead of Do-Re-Mi...etc. it is sung as SRGMPDNS-SNDPMGRS. The other major guideline in Carnatic Music is thalam. Thalam is a continuous cycle of a certain number of beats. Thalams are differentiated by the number of beats they have. For example, a very common thalam that many compositions are set to is an eight beat cycle called Adi thalam. 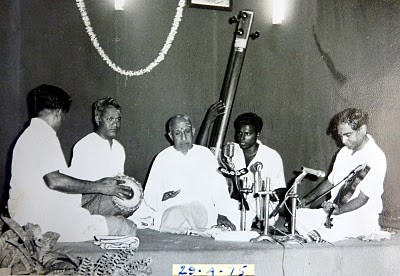 Semmangudi Srinivasa Iyer singing a cutcheri accompanied by the most popular accompanist on violin, Lalgudi Jayaraman.

In Urdu, the word "cutcheri" means concert or performance. Carnatic Music, especially when performed is centered around the vocalist. A typical Carnatic cutcheri is performed as an ensemble, usually the main performer is the vocalist who is accompanied by a string instrument, usually a violin as well as a large two sided drum called a mridangam. Other instruments in Carnatic Music include the ghatam, a round bowl-shaped drum, the flute, and a large string instrument that is played by plucking the strings called the Veena. In the concert, the vocalist sings nearly all the time while the violin directly shadows or imitates him or her, and the mridangist plays a beat that helps keep the pace of the piece. In a cutcheri, there are two main elements that the performers must present. These two aspects are "Kalpitha Sangeetham" and "Manodharmam" or composed and spontaneous music respectively. All pieces sung in the concert are composed songs, these fall under Kalpitha Sangeetham. To add flare, Carnatic cutcheris include other improvisations like alapana, swaram and niraval. Alapana is an improvisation where the artist must sing many intricate sets of notes together, alapana is usually sung before a large composition. Swaram is singing the different preset swarams that are set to the specific raga you are singing in different speeds and patterns. The trick is when you sing swarams you always have to finish at the same place in the song. Finally, niraval is a type of improvisation where you change the tune of one line by changing the orientation of the notes.

One of the greate compositions of Carnatic Music that was composed by Muthuswami Dikshithar has 72 verses, each of which is set to one of the 72 melakarthas. This song is very long and hard to sing!

Why is it Unique?

Carnatic Music, though it has some similarities to other types of Indian Traditional music, is a very unique genre of music. Firstly, Carnatic Music is one of the only types of music in the world where all of the sound that you produce has to be made from the chest voice. While in other styles of music chest voice is used, it is used less frequently and the artist usually moves to head voice if needed. Where as, in Carnatic Music, musicians are trained to sing with their strong chest voice at all times. Also, as I explained earlier, Carnatic Music is unique because of its restrictions. It is one of few types of music that has set tunes and beats, raga and tala respectively. This not only limits you to singing within "restrictions", but it also forces the artist to think creatively and intelligently to create the most effective phrases. Furthermore, this makes Carnatic Music one of the most creative based styles of music. This balance between composed pieces and creative aspects, in itself makes Carnatic Music a unique style of music. 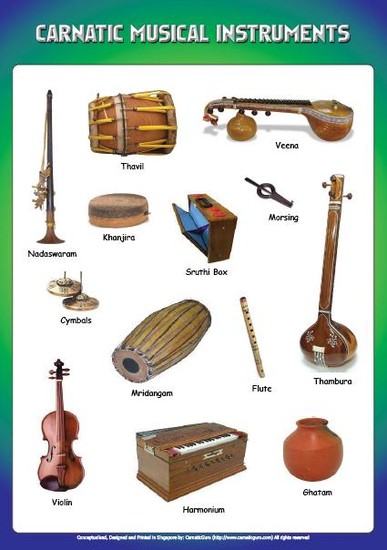 Diagram of all the different instruments used in Carnatic Music including the violin, veena, flute mridangam and ghatam.

Connect with A Ravikanth

Follow A Ravikanth
Contact A Ravikanth
Embed code is for website/blog and not email. To embed your newsletter in a Mass Notification System, click HERE to see how or reach out to support@smore.com
close