Tolu is using Smore newsletters to spread the word online.

Get email updates from Tolu:

Gross national product (GNP) is the market value of all the products and services produced in one year by labour and property supplied by the residents of a country. GNP allocates production based on ownership.

Health of Economy in the 1920s

The 1920s was an era of great economic growth where America had great stock of natural resources and overseas markets after the First World War. Manufacturing was more efficient due to mass production and confidence in the stock market grew immensely. Technological development such as radios and vacuum cleaners contributed to the prosperous economy. Also, credit made middle class citizens able to buy more luxurious things. Known as the "Roaring Twenties," it is evident that the during this time period, the economy was in an overall great and healthy standpoint and though there were minor recessions during this time period, all led up to the massive depression also known as the Great Depression. Because of the new industries and business that were emerging, job opportunities and new careers became available which changed the statistics regarding employment rate in the US. However it was unfortunately inevitable that an economic crash would soon take place. Since credit was available to the middle and lower class, lavish spending was prevalent which unfortunately led these citizens to be in large of amounts of debt, and even though the GNP relatively increased until 1929, there was a significant fall afterwards due to the stock market crash. So even though the economy was relatively healthy during the twenties, many aspects hindered the health of the nation, thus leading to the unfortunate Great Depression. 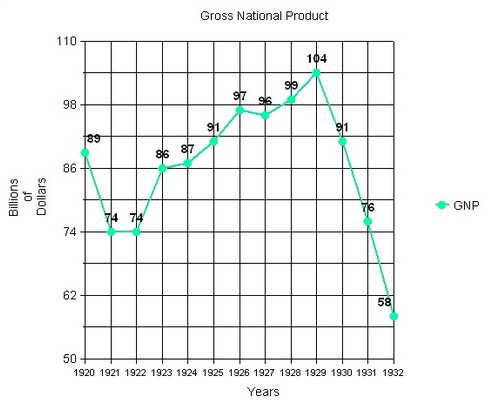 The gross national product of the United States in 1929 reached its peak in 1929 at $104.4 billion. By 1932, the GNP had dropped to nearly half of its 1929 rate, at $58.5 billion. Industrial production dropped by more than half, and automobile production dropped by two thirds. Capital taxation on excess profits, undistributed profits, property and stock lowered GNP. In addition, industrial production dropped by more than half, and automobile production dropped by two thirds. Great Depression was a worldwide business slump of the 1930's. The Great Depression began in October 1929, when stock values in the United States dropped rapidly. Thousands of stockholders lost a lot of money and banks, factories, and stores closed and left millions of Americans unemployed. For those who remained employed, wages fell significantly. The number of foreclosures and repossessions climbed steadily. Many investors lost confidence in the solvency of their banks and demanded deposits in cash, forcing banks to liquidate loans. Bank runs were common the United States in the spring and fall of 1931 and the fall of 1932 and thousands of banks had closed their doors. Hoover's administration tried support failing banks with government loans so that the banks in turn would loan to businesses, which would be able to hire back their employees. In the "Roaring Twenties," most Americans were buying goods with credit, where 80% of Americans had no savings. With many Americans in debt, businesses went under – the poorest suffered the most.

Tolu is using Smore newsletters to spread the word online.