Most Chinese emperors did not play around when it came to war. The strategies they used may of been crazy but proven affective . While in war most emperors made list of weapons that worked well so they could know what to use in the future.Some emperors like Shin Hang De even built extensive walls just so they could keep enimes out.Sun T'zu wrote his straggles down in books so other emperors could use them. Now you know some of chinas ruthless war strategies. 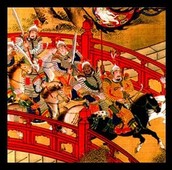 One of there military strategies was riding on chariots. the chariot riders would them give commands to drummers who sounded the commands on there drums.

The Chinese helped invent some of today's most popular weapons and toys. When we go out on a windy day at the beach we bring a kite long ago the Chinese use kites for war they used the kites to map out land between them and there enemies. Crossbows where the most accurate long range shooting weapon until the rifle was a invented in 1826. kung fu a popular sport also came from the Chinese it was first used in war and is on of the most famous war tectonics that came from china it involves kicks holds throws and punches.

Gunpowder is a necessity for things like fore works and protection but how big was it in China.China was separated in to two stages post and pre gun powder.All though the Chinese used fireworks a lot they where never used in war. Chinese weaponry was also sepraterd in to stages hot and cold, cold weapons such as swords, daggers, cross bows, and bow and arrows, hot weapons consistsed of guns ,cannons, and rifles cold weapons where invented before gun powder and hot where invented after. which stage would you rather live in post or pre gun powder.

The Origin of Weapons

Weapons where not always used for warfare they were first used for hunting. Weapons where a social rank the better metal or material they where made out of the better ranking war lords where most likely buried with an axe of jade or other weapons .There where three stages of weapon production The Paleolithic The Mesolithic and The Neolithic stages. Paleolithic weapons consisted of chipped stone arrow heads. Mesolithic weapons consisted of carved weapons and arrow heads. And Neolithic weapons where made up of smoothed weapons. Weapons where not always used for warfare but have been use for different purposes over the years. 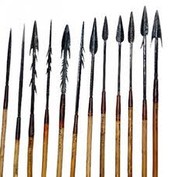 these are some ancient Chinese weapons.