Aiden is using Smore newsletters to spread the word online.

Get email updates from Aiden:

Al Capone aka "Scarface" was born in Brooklyn New York in January 17, 1899. His birth parents were immigrants from Italy. Their names were Gabriel and Teresina Capone.

Al had a rough childhood in America. They lived in a rough part of Brooklyn and he was introduced to bad behavior at a young age. At the age of 14 Al slapped his Teacher in the face and was expelled. That was the turning point in his life of crime.

Al in his early crime days did not really have very many horrible crimes. He did Gambling, he was a part of Bootlegging, he bought many prostitutes. He also did not pay his taxes, so he also did tax evasion. But he started to do many bad things after the death of his father. One of the most horrible things he did was the St. Valentines Massacre. One of Capone's longtime enemies Bugs Moran's men were shot to death by 7 men dressed as police. The cops could never trace it back to Capone but everyone knew he did it. 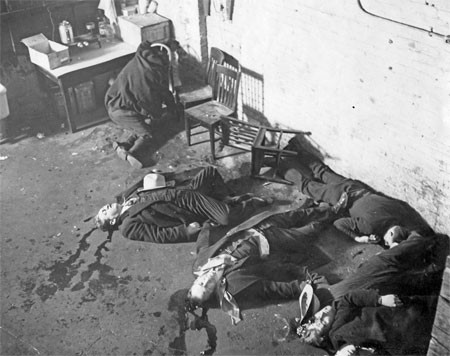 Al Capone finally was caught but of all the vicious things he did it was tax evasion that sent him to prison in Atlanta in May 1932. The prison was one of the toughest Federal Prisons. Even though it was, he still made his cell into basically a kingdom putting in mirrors, typewriters, and rugs. He also was still running his business from the prison. Since they noticed this, they transferred him to Alcatraz where he would not be able to control his business or have contact with the outside world.
Mini Bio: Al Capone

On January 6, 1939 he left Alcatraz after an uneventful stay. For about 8 years he lived on an estate in Miami. On January 19, 1947, Capone collapsed from a brain hemorrhage. The newspapers announced him dead but they were false. But the following week he developed bronchial pneumonia. On Saturday night January 25, witnesses claimed Capone looked lucid. He died that night on 7:30 p.m. Capone was buried on a cold winter day at Mount Olivet Cemetery. He shared a black granite marker with his father.

Al Capone was the most known and most dangerous gangster around the world and forever will be, because of the troubles he caused in Chicago.

Aiden is using Smore newsletters to spread the word online.