THE ALMA JORDAN LIBRARY, University of the West Indies

THE ALMA JORDAN LIBRARY, University of the West Indies

OCLC Award for Innovative Cooperation Initiatives in the Caribbean

OCLC is committed to international cooperation, research and innovation promotes

the advancement of librarianship. With this Award OCLC intends to recognize one or two libraries for their accomplishment in promoting cooperation and the cooperative for the benefit of its clientele or community. 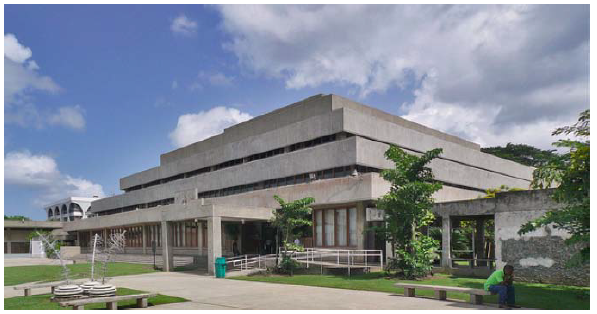 A Leader on Innovation

The Alma Jordan Library (AJL) - previously known as the Main library - on the St. Augustine Campus of The University of the West Indies (UWI) is located in the Republic of Trinidad and Tobago. The AJL is organised into four subject divisions: Engineering, Food & Agriculture/Science & Technology, Humanities and Social Sciences. Other divisions which provide information services to the public include the Circulation and Access Services, and the West Indiana & Special Collections Divisions. The latter houses Caribbean materials and is also the repository of some 132 distinguished special collections of rare Caribbean materials of historical value and international significance. These include the Derek Walcott, C.L.R. James and Eric Williams Memorial Collections which have been named to the UNESCO Memory of the World International Register.

The AJL also houses the Digital Library Services Centre which spearheads the UWI Institutional Repository (branded as UWISpace) with a mandate to support the dissemination of knowledge by providing open access to the digitally preserved intellectual output of the UWI. The Alma Jordan Library has a wide collection of electronic resources including 248 databases, with 59,398 electronic journal titles, and 31,863 electronic books. In addition, it has holdings of over 426,162 monographs with an additional increase of approximately 5,000 titles annually. These holdings also include a serials collection of 55,119 bound volumes and 865 print journal titles.

The Library also has 4,083 audio-visual items, 1,428 cartographic items, and 5,982 photographs, 4,203 multimedia and 22,783 microfilms. The AJL is also a member of OCLC and contributes to the WorldCat Database in addition to being a subscriber to World Share Inter Library Loans Services. Explanation of the goals and objectives of the project:

During the period March 2014 to March 2016, a special e-Book initiative was undertaken between the AJL and the University of the West Indies Press (UWI Press). The UWI Press is a not-for-profit scholarly publisher of peer-reviewed books in thirteen academic disciplines which include Caribbean History, Caribbean Cultural Studies, Caribbean Literature, Gender Studies, Education and Political Science. The primary target audience for the use of these e-books are the students and Faculty of the sixteen (16) UWI campuses accessible via the URL http://libraries.sta.uwi.edu/UWIPress/] The goals of this project were to: • Convert the UWI Press’ print books into e-books format • Develop a web based platform to provide online access to 200 books published by the UWI Press in the first instance • Allow for greater visibility and accessibility of these unique Caribbean electronic resources •
Archive the e-books that are hosted in the web based platform • Enhance metadata of these resources for greater indexing and searching options by users and search engines Methodology, resources and tools used to implement the project: The project was developed in an evolutionary manner. In March 2014 an initial design was created for the platform and a prototype was developed using UWISpace as the technology platform to allow for controlled access to the e-books. This initial prototype had the basic description of each title publicly available on the web and the full text of each book was accessible on UWISpace for the UWI Press clientele.

After conducting user tests and evaluation, this prototype was found to be less user-friendly when compared to other e-book platforms. A second prototype was then designed and developed which allowed the user to view the books from the web browser without having to download it. The user test on this second prototype proved to be more intuitive and user-friendly which led to the further development of it. Coding for this platform was done in-house by the AJL’s Web System Programmer using open source tools – PHP and MySQL. Design, development and acceptance of this prototype was completed over a four month period. Outcomes and benefits experienced by the institution(s) and/or end users as a result of the project Many benefits were derived from this collaborative project: • It created an opportunity for the UWI and its stakeholders to enhance regional co-operation and integration, to ensure indigenous control of Caribbean content and to provide electronic access to Caribbean content to the peoples of Latin America and the Caribbean. • It served as an impetus for the AJL to build on this experience and explore and develop other innovative products with its stakeholders. •

The end users of this product can view the catalogue of the books that are available on the platform by browsing various subject areas. • Faculty and students in institutions with subscriptions are allowed automatic access to the platform. • Faculty and students can read the books in their web browser (the major web browsers are supported as well as the site is responsive) without having to install any additional software • The platform supports sharing books via social media • The platform supports full-text searching

Because what is known must be shared.

OCLC is a global library cooperative that provides shared technology services, original research and community programs for its membership and the library community at large. We are librarians, technologists, researchers, pioneers, leaders and learners. With thousands of library members in more than 100 countries, we come together as OCLC to make information more accessible and more useful.

Whether we’re supporting advancements on the leading edge of science or helping children build a strong learning foundation, shared knowledge is the common thread. People can find the answers they need to solve important problems in their lives, in their communities and in the world. Together we make breakthroughs possible. Both big and small.