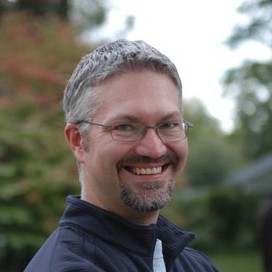 Now, why was this up in the library and what does it have to do with education? We are always looking for fun ways for students to share their learning and integrate technology into the curriculum. Rather than simply write a report or make a poster about something they've learned, the green screen allows students to be transformed to new places, share their ideas, or simply have fun talking about a favorite book. So far, the green screen has been used with kindergarten students all the way up to 4th graders. Below are some of the projects involving our green screen and Ixonia students.

How We Did It

The first thing that's needed is a green backdrop. There are fancy, expensive green screen kits, but in our library, we simply have a piece of green cloth, found at a local fabric shop, attached to a wall where there is good lighting. Two different applications were used when created the videos below. For the kindergarten videos, the students were recorded in front of the green screen using in iPad. In addition, pictures were taken of the pages of the books. Then, the pictures and videos were imported into iMovie, video editing software available on a Mac, and edited together for the final product.

For the other videos, everything was done on an iPad. The app, Green Screen by Do Ink, was used. This $2.99 app is very easy to use and allows students to create individual videos by adding their own images or video as the backdrop. Only images were used so far, but students can record themselves with a video clip playing in the background. Perhaps, that's something students will choose to do in the future. The first grade book recommendation videos were completed as individual videos and combined into a longer video using the free iMovie app on the iPad.

A Kindergarten Reading of The Pigeon Wants a Puppy

The third graders are studying countries and are sharing their information in a variety of ways. Some of the students chose to create a video with images from their country as the backdrop. In the video below, students used a picture of the capital building as their background while they shared information about the country.
Spain

The fourth graders wrapped up their unit of study on immigration and shared out their learning a couple of weeks ago. Russel, one of the students, wrote his own rap song about immigration and made a video using the green screen. Check out his video below.
Russell's Immigration Rap

Follow Chad Lehman
Contact Chad Lehman
Embed code is for website/blog and not email. To embed your newsletter in a Mass Notification System, click HERE to see how or reach out to support@smore.com
close