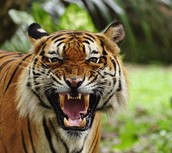 The Tiger and the Sheep

In the forest where the tiger lived, he would roam around in search of a friend. He had no friends because no one trusted he wouldn’t eat them because he was much larger and stronger than the other animals, so he would walk around every night and just sigh. But one day, while he was taking his daily walk around the trees, he had heard something.

“A friend”? he thought to himself, a sly grin on his face. He turned around he silently walked over to the new animal who he would soon make his friend, to introduce himself. As he approached this animal, he saw that it was a sheep. He called out to it demanding it to come to him. The sheep had a terrified look on its face, but came running over anyway.

The tiger had thought to himself, “This is going to be a lot easier than I expected it to be. Now I just need the perfect plan, and quick. I am hungry after all.” As soon as the sheep approached, the tiger had said, “Hmm. You seem like a loyal friend. If you truly are as loyal as you look, go find me something to eat for my lunch,” and the sheep left to go bring the tiger something to eat.

The tiger began digging a wide but not deep, hole in the ground as soon as the sheep left his sight. He then found enough leaves to cover it so it wouldn’t be visible to the sheep. When the sheep came back, he had fallen in the hole with the tiger’s food. The tiger was now angry on the outside, but on the inside he was full of joy, knowing that the sheep will soon be dinner and his plan called a success. “Why, you should watch where you are going! Now get out of this mess and we’ll eat together”, growled the tiger in the meanest tone the sheep had ever heard.

The tiger walked away swiftly with his large paws slamming onto the dirt, leaving claw marks on the ground. The sheep trembled with fear, too afraid to move with his small hooves stamping the leaves and dirt under him. Little did the tiger know, the sheep was as smart as him. The sheep climbed out of the hole by pushing the leaves and dirt and scared the tiger. The sheep hadn’t realized until now that the tiger was waiting until dinner time to eat him. He was speechless. Even though he was terrified of something as simple breathing, he decided to speak up.

“Y-y-y-you can’t just eat me like this. You deserve a better dinner. You go wander around and find something better tasting than a weak, little, sheep,” addressed the sheep quite confidently.

As the tiger disappeared into the woods in search of dinner, the sheep walked the opposite way to create an army against the big, strong, tiger. When the tiger came back to where he originally was, he had no food. The sheep had told his army to go hide so it looked like he too came alone.

The tiger then said, “Ha. You are pathetic. I have found no dinner and you are right in front of me. So-,” the tiger was cut off by the sheep’s call for help. The army of animals sprinted as fast as they possibly could and pushed the tiger into the hole right after they dug it deeper so he would never get out. The animals backed away from the tiger and the sheep stood over him and said the same thing the tiger said when he was in the hole.

You should never let people push you around, and if they do, be sure to stand up for yourself.