Civil War to the Present

Civil War to the Present

Suffrage, Equal Rights, and Leadership in Many Reform Movements

Universally recognized for their role in the suffrage and equal rights movements, women were leaders in many post Civil War reform movements. These actions include as Muckrakers, social Progressive reformers, and Civil Rights activists.

The Suffrage Movement Culminated in 1920 with the Ratification of the 19th Amendment.

In 1872, Susan B. Anthony was arrested for voting in a local election (Rochester, New York). She was convicted and fined. She refused to pay the fine.

"No man is good enough to govern any woman without er consent."

In 1913 Alice Paul helped to organize a women's suffrage parade in Washington, DC. In 1917, Alice Paul started the "silent sentinel" program to picket to show support to advocate women's right to vote. Paul was arrested and jailed for illegally demonstrating in front of the White House.

"We women of America tell you that America is not a democracy. Twenty million

women are denied the right to vote." 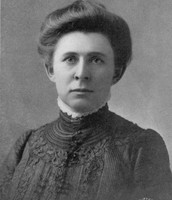 One of the most prominent muckrakers famous for her book The History of Standard Oil, and attack on that company and the practices of John D. Rockefeller.

“If it has taught us anything, it is that our present law-

makers, as a body, are ignorant, corrupt and unprincipled;

that the majority of them are, directly or indirectly, under

the control of the very monopolies against whose acts we

have been seeking relief. . ” 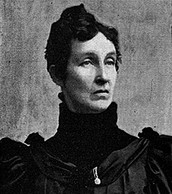 A populist and a Populist. Lease attacked the power of business and wall street in making the average worker what she believed to be a "wage slave". 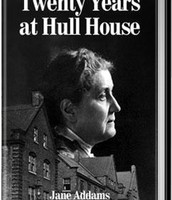 One of the most important Progressive reformers who focused on the needs of women, children, public health, and world peace.

She founded Hull House and was a co-founder of the ACLU. Addams was the first American female recent of the Nobel Prize for Peace and is credited with starting the profession of Social Workers.

Hull House included, "...clubs for older children, a public kitchen, an art gallery, a gym, a girls' club, a bathhouse, a book bindery, a music school, a drama group and a theater, apartments, a library, meeting rooms for discussion, clubs, an employment bureau, and a lunchroom."

Female Leaders in the WWII Era 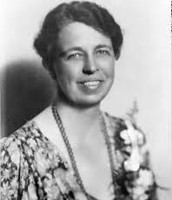 Eleanor Roosevelt redefined the position of the first lady. She was the first, first lady to hold press conferences, give paid speeches, and write a newspaper column.

Roosevelt was an early civil rights activist instrumental in dozens of African Americans being invited to the White House, The appointment of Mary McCleod Bethune to a high post in the NYA, the use of the Tuskegee Airmen overseas, and making the mall available to Marian Anderson to perform after she was denied the use of Constitution Hall because of her race. 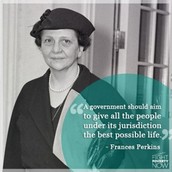 Perkins was the first female member of any president's cabinet as Secretary of Labor from 1933-1945.

Perkins was instrumental in the creation of the Fair Labor Standards Act and the first minimum wage. She also had both a creative and supervisory role in the many of the Public Works agencies of the New Deal. 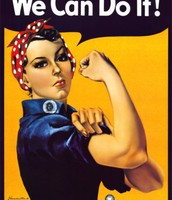 An amalgam of the many women who played a key role in industrial America providing war materials.

Rosie the Riveter was the symbol of women breaking gender stereotypes and creating new opportunities for women.

Women in the Civil Rights Movement 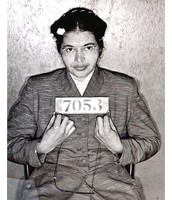 Rosa Parks refused to give up her seat in 1955 in Montgomery, Alabama sparking a long but successful bus boycott that became a signal events in the modern civil rights movement.

Fannie Lou Hamer was a civil rights activist working for voter registration and Freedom Summer through SNCC. Famer was nearly beat to death while in police custody in Mississippi

During the 1960s, Famer was key in getting black delegates seated at the Democratic National Convention..

Friedan was the author of The Feminine Mystique and a founder of the National Organization of Women.

"The feminine mystique has succeeded in burying millions of American women alive."

Schlafly was a conservative activist and founder of the Eagle Forum, author of A Choice, Not an Echo.

"What I am defending is the real rights of women. A woman should have the right to be in the home as a wife and mother." 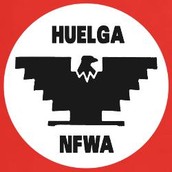 Huerta was a labor leader and civil rights activist, working with the a national Farm workers Union, representing the migrant farm workers.

"I couldn't tolerate seeing kids come to class hungry and needing shoes. I thought I could do more by organizing farm workers than by trying to teach their hungry children."

Jordan was a leader in the Civil Rights movement and the first African American elected to the Texas Senate post Reconstruction, first southern black female member of congress

Jordan was also a recipient of the presidential Medal of Freedom. 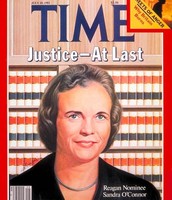 O' Connor was the first female justice on the United States Supreme Court.

Sally Ride was the first female astronaut and youngest astronaut to travel in space (age 32). 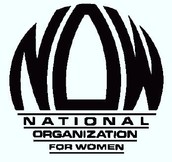 "The Equal Rights Amendment (ERA) was a proposed amendment to the United States Constitution designed to guarantee equal rights for women. The ERA was originally written by Alice Paul and Crystal Eastman. In 1923, it was introduced in the Congress for the first time." (Wikipedia)

"Men and women shall have equal rights throughout the United States and every place subject to its jurisdiction.

Congress shall have power to enforce this article by appropriate legislation.

The National Organization for Women (NOW) was founded in 1964.

NOW's statement of purpose written by Betty Friedan in 1966,

"To take action to bring women into full participation in the mainstream of American society now, exercising all privileges and responsibilities thereof in truly equal partnership with men.""