Job: Men typically worked on farms and grew their own food, men grew the crops, hunted, and fished.
Relationship: The father had control over his children, it was likely they arranged marriages it became justified on the basis that he provided for the child’s needs.

As time went on the father became legally responsible for the child: feeding, clothing, and housing, education, training for a trade, inculcation of religious beliefs, etc. The fathers role towards his children in the early 1600s solidified his authority over the house/family.

Beginning in the early to mid 1600’s in Pre-Colonial America women played numerous major roles in regard to work and religion and were quite knowledgeable on a wide variety of topics, especially those related to child-rearing, household duties and serving the Church. Yet despite being “subordinate to their husbands” at both home and church, “Puritan ‘goodwives’ played an important part in the economies of their households and husbands entrusted them with a wide range of practical responsibilities.”

Involvement:The mother wasn’t involved, because under the coverture system, which stated that she legally didn’t exist, she and her husband were considered “one” and she couldn’t provide for the children anyway because she legally did not have the capability to own property or to contract.

Job: Women usually took care of the poultry and the dairy, did the milking, made butter and cheese, brewed the beer. Women often made their own money by selling their surplus chickens, eggs, butter cheese, beer etc. They also made household items like soap and candles. Women would spend a lot of time spinning flax or wool into thread to be woven into cloth, spinning was a very common female occupation in the pre-industrial era, the word 'spinster' was in common usage until quite recently to indicate an unmarried woman. They would make alot of their own clothes as well.

Role in the home: Women were also expected to be the family doctors, and to make home remedies for illnesss,and be able to treat a wide variety of complaints. Women maintained the needs of the household and actively performing in church functions while leading a “Puritan” lifestyle based on religious purity, chastity and devotion to one’s family, husband, children and fellow men and women within their communities. 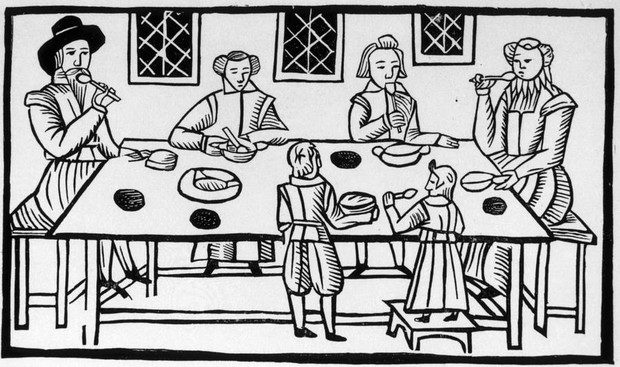 Although children had limited rights and were held under strict rules and regulations of their parents, young boys had more opportunities than young girls. Boys were not only allowed to explore the outdoors and partake in activities such as fishing and hunting, but they also often partook in working as apprentices outside the home, practicing mainly carpentry. However, young girls were brought up much differently than the young boys. Girls were expected to cook, wash, clean, sew, and tend to their mother's needs on a daily basis. The mother's of the daughters taught them to work around the house starting at a very young age due to the fact that being a midwife was one of the most prestigious jobs a woman could obtain.

Many puritan children learned to read and write, however the majority of households only owned one book, The Holy Bible. Most children attended a "petty school", which taught the children the basics of reading, writing, and arithmetic. Older boys tended to go on to grammar school in order to further their knowledge, however many children left school early in order to work. 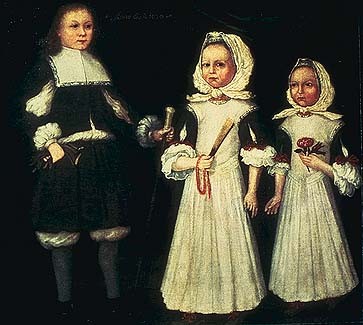