"Music kind of gave me a place to go and be different, and be whoever I want to be." -Hayley Williams

Hayley Williams was born in Meridian, Mississippi, on December 27th, 1988. She moved to Franklin, Tennessee when she was 13, where she met her fellow band members. She is the lead singer and occasional pianist of Paramore, a band she has been apart of since she was 15. 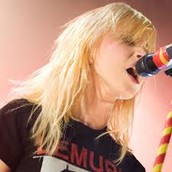 Hayley Williams started her career when she was fourteen. She was signed to a two year production deal in 2003. Atlantic Records signed her shortly after, and originally had the plan of making Williams a pop artist. She declined, saying she wanted to be apart of a band. She then formed Paramore with Jeremy Davis, Josh Farro, and Zac Farro, and the band was signed to the label, Fueled by Ramen. 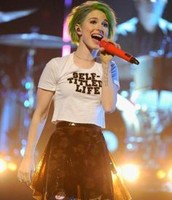 Hayley Williams is the lead vocalist of Paramore.

The Paramore albums that she has participated in are...

All We Know is Falling

She also has featured in other songs including Stay the Night by Zedd and Airplanes by B.O.B.

She wrote a solo song for the movie, Jennifer's Body, titled "Teenagers." 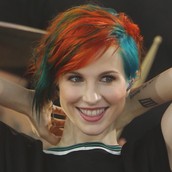 Hayley Williams never had formal vocal training until she developed vocal nodules in 2009 and had to have surgery. Since 2009, she has been working with vocal coach, Brett Manning, to correct her vocal technique.

Hayley Williams has won many awards by herself and with her band.

Some of the solo awards she won are...

The Billboard Trailblazer award in 2014

Some of the wards she won with her band are...

Kerrang! Award for best album for "Brand New Eyes" in 2010 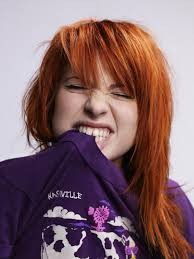 Some of her influences from when she grew up are Debbie Harry, Siouxsie Sioux, The Distillers, and Shangri-Las. More modern influences of her are Beyoncé, Gwen Stefani, and Joy Williams.