ESC-20's FREE Parent Trainings & Webinars start back up on January 15, 2020! Check out the January offerings below & make plans to participate! 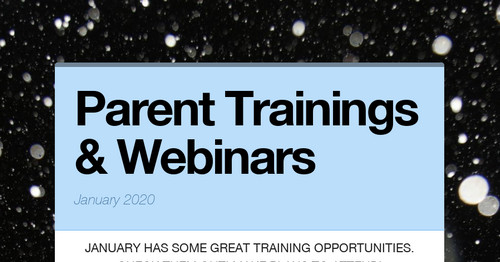 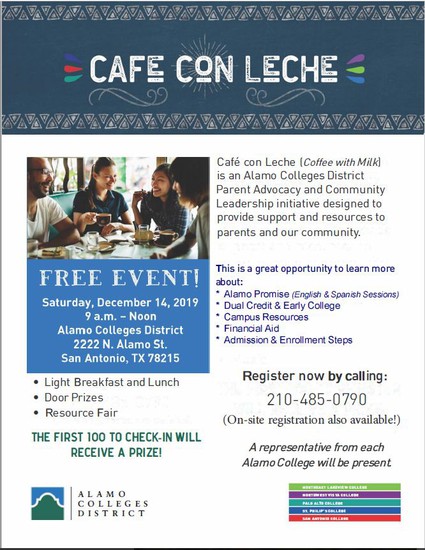 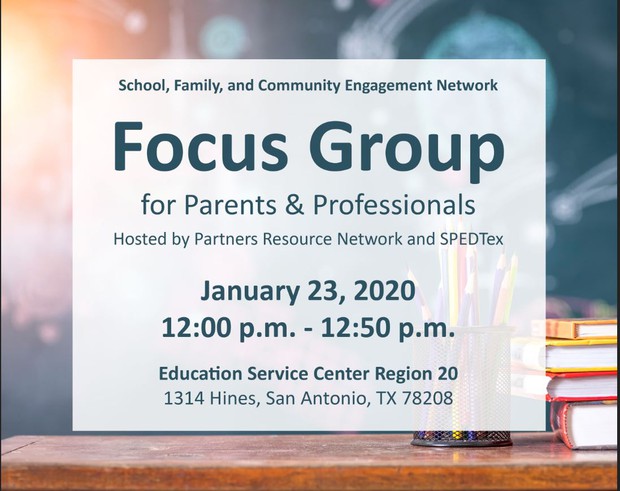 About the Focus Group

The goal of this Network is to help school staff and parents build collaborative relationships and increase positive outcomes for students with disabilities. The Network has been asked by the TEA to gather information regarding special education trends and needs from the perspective of parents’ and other stakeholders.

The information gathered will be used to inform the development of resources for parents/guardians and educators of children with disabilities.

Bring your lunch if you'd like OR come early and purchase a lunch at Cafe 20!

· ADHD in the Classroom: Linda Hamilton

Click the Image Below to Check out GREAT Information and Upcoming Community Events from UTSA's P-20 Initiatives! 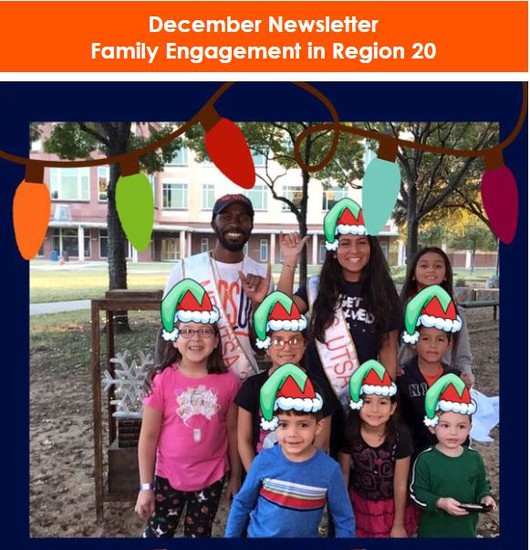 Click the image above to read the English edition!

With 17 school districts, dozens of public charter schools, and numerous after school programs, San Antonio’s education landscape is complicated. Until now, no tool has existed to help families find their way around. Word-of-mouth, internet searches, and marketing materials leave families wondering if they are getting the best, most accurate information. Others wonder if they even know all their options.

City Education Partners built San Antonio School Finder as a one-stop-shop where families can easily search for schools and after-school programs for their children. We provide state accountability data and need-to-know information about school programs, but we also go a step further. By allowing schools and programs to tell their own stories, parents get a glimpse of school culture—a critical factor in finding your best-fit.

Check it out HERE. 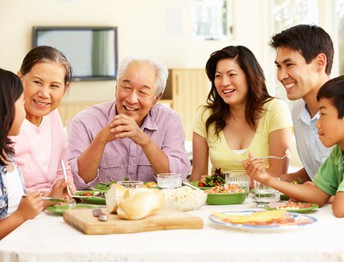 One of the qualities parents say they most want to instill in their kids is responsibility. However, it seems that more and more families are struggling with how to balance the demands of tough academic loads and extracurricular schedules against the very real need to teach kids to step up and be more responsible. Colleges are adding classes in “adulting” to their course catalogs, and everyone from middle school educators through graduate school deans are sounding the alarm over kids’ lack of basic life skills. But how do you enforce a chore chart when your teenager is putting in late nights mastering AP classes? And if you have to stand over your middle schooler to be sure expected tasks get done, is he really learning responsibility? Where’s the line between expecting kids to step up, and overloading a generation of already stressed-out young people with increasing to-do lists?

Read the rest of the article and tips HERE. 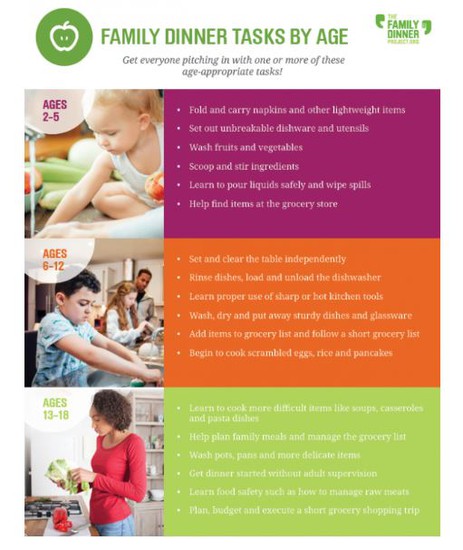 Responsibility isn’t just about getting a job done; it’s also about learning to do good things for others. Teach the “giving” side of responsibility and enjoy the spirit of the season with these conversation starters. 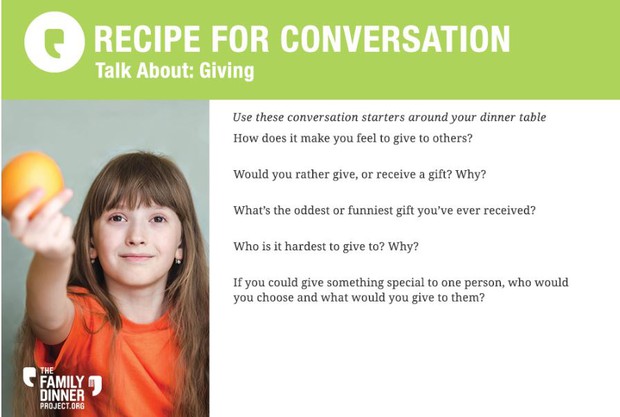 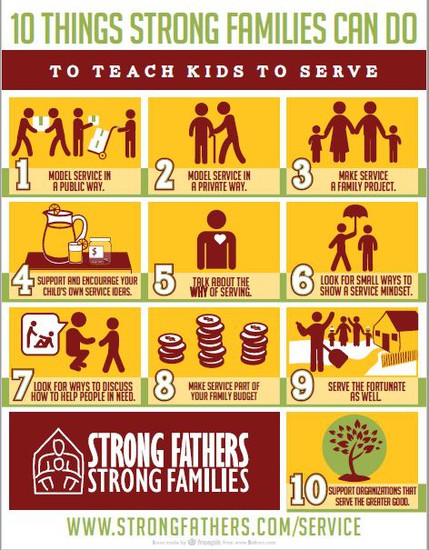 What a great tool to use to ask your kids questions to get them to talk about school and themselves! 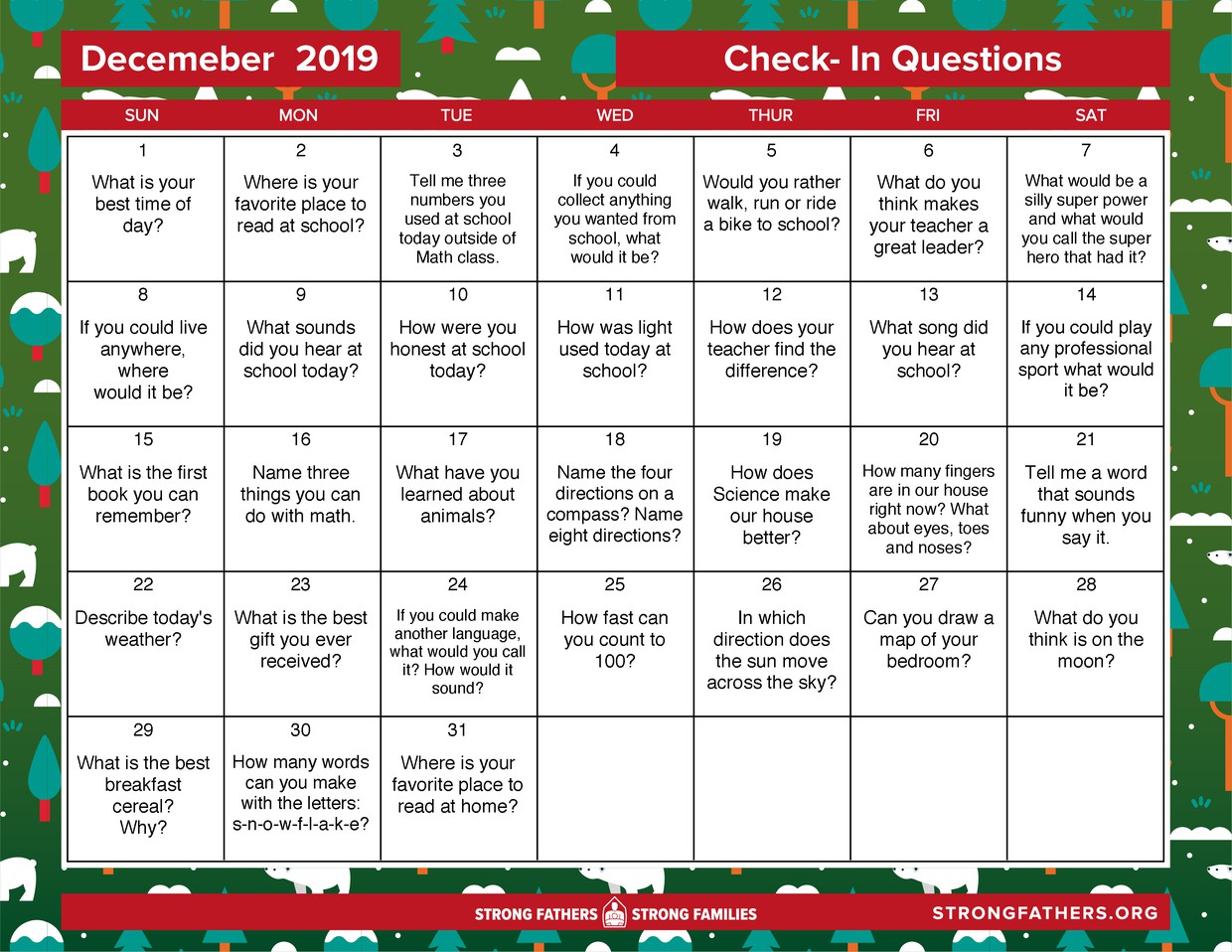 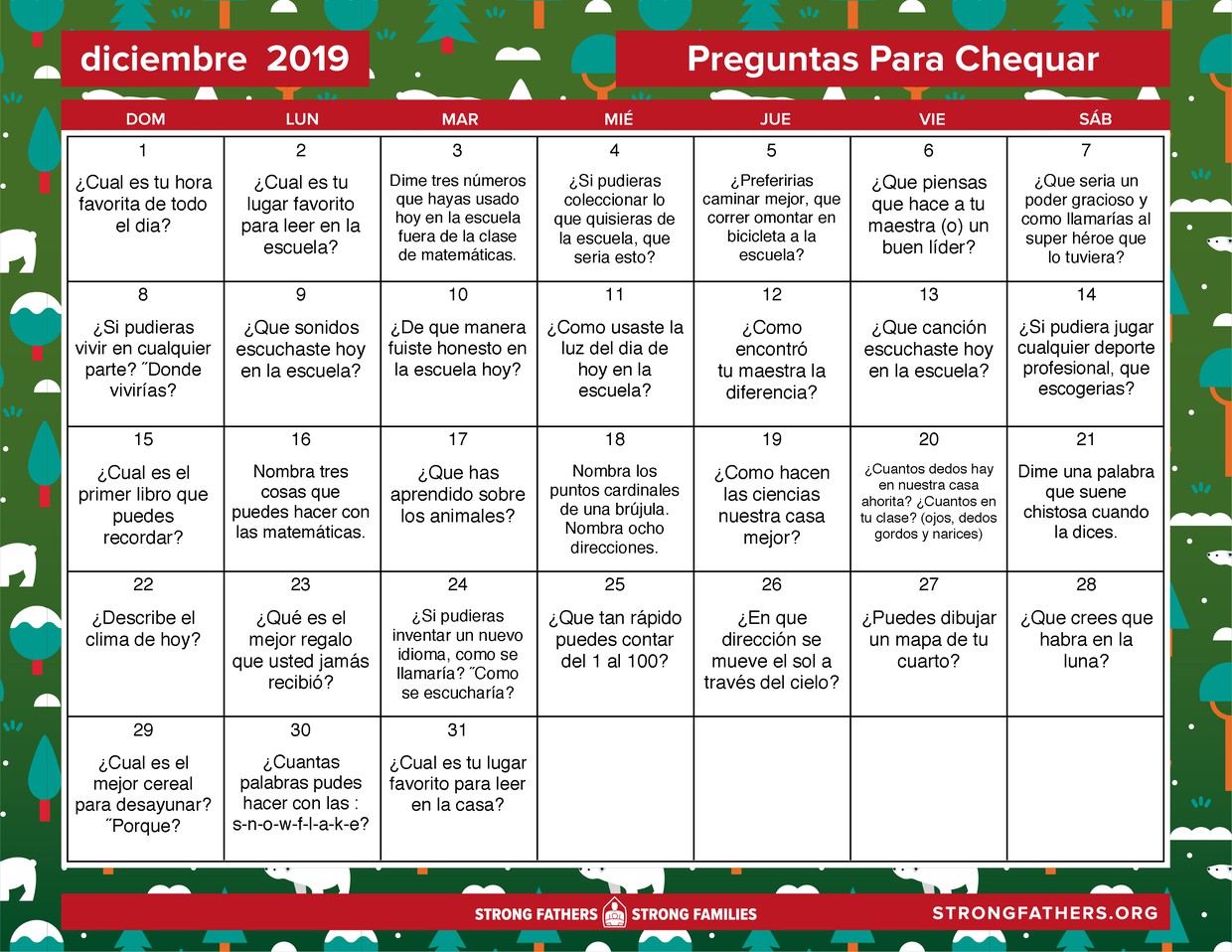 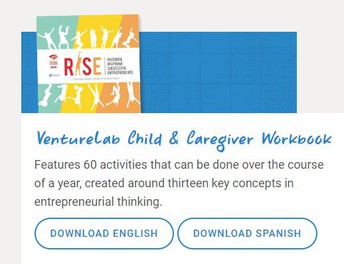 Play and being playful are considered cornerstones of creativity and idea generation. There is significant evidence that many groundbreaking products and services were developed through playing with ideas, materials, and products.

Play itself gives us a fresh perspective, and according to American Academy of Pediatrics, “Play is fundamentally important for learning 21st century skills, such as problem solving, collaboration, and creativity, which require the executive functioning skills that are critical for adult success.”

VentureLab has created a series of free activities you can do at home that are fun and playful AND help emphasize 21st century learning skills!

Download the VentureLab Child & Caregiver Workbook in English &/or Spanish! 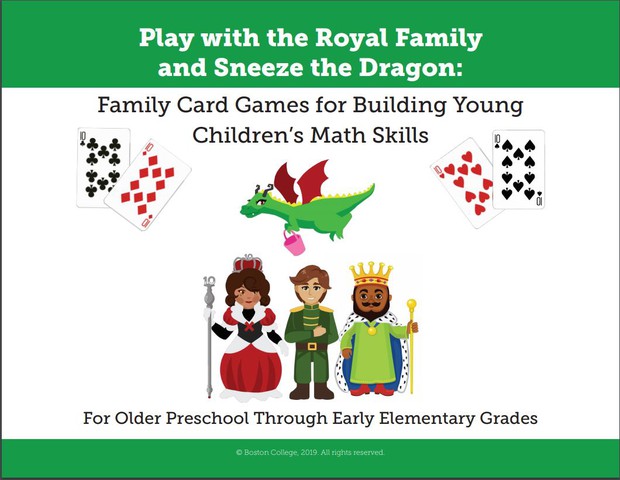 Families play an important role in helping young children learn about numbers, counting, and other math skills. With their families’ help, children can learn to enjoy math from an early age. And the best news is that one way of learning about math at home is through playing games. Card games, for example, are a great way to have fun with children while learning math—and all you need is a deck of cards!

In this blog, we introduce you to a set of 10 card games we’ve designed for young children between the ages of about 4 to 7 years old, but older children will enjoy these games too. We hope that families will use our games as a starting point for creating their own games and discovering other ways to have fun with math at home.

What Math Skills Are Taught Through the Card Games?

In the card games presented here, children will be learning more about the following math concepts:

Identifying which number is larger or smaller. “Which number is larger, six or four?” Answering this question involves comparing the magnitude of numbers in relation to one another and helps children to understand that numbers are not only symbols but also represent a certain quantity that can be compared in size with other number symbols. This understanding gives them a toolbox for a host of more advanced math skills leading to addition and subtraction. [3] Comparing numbers can be tricky for young children, especially when larger numbers are very close together. [4] For example, it takes a young child longer to decide whether eight is larger than seven than it does for them to decide whether eight is larger than four.

Ordering numbers between one and 10 from small to large. “Can you put these numbers in order from smallest to largest: 4, 9, 6, 2, 7?” Putting number symbols in order from smallest to largest provides another way of thinking about the magnitude of numbers in relation to one another. Again, this is an important foundation for learning and doing addition. [5] Research has shown that even infants have a basic sense that there is an order to numbers. [6] However, being able to put numbers in order takes time and practice to develop. [7] One reason is that it can be hard for young children (and even adults!) to keep track of a lot of information at once. [8]

Adding with small numbers."If you have seven cards and I have five cards, how many cards do we have altogether?” Learning to add represents a major milestone in mathematical learning. It takes children years and lots of practice to master simple addition. [9] Not only will they use these skills in everyday life, but they will also continue to build on these skills for years to come as they learn increasingly complex arithmetic operations such as subtraction, multiplication and division, algebra, and more.

More advanced arithmetic. “If you two take away from seven, what are you left with?” Subtraction is an important skill in early arithmetic. You could help children to think about addition with questions such as, “Two plus what number equals seven?” Solving these types of problems help children understand the relation between addition and subtraction.

Picking a Card Game for the Child's Math Level

Along with the games, we provide a simple chart (see below) to help families decide which game to start with and what to move on to as the child learns. This is important because research shows children’s learning happens when they are provided with just the right amount of challenge. Within the games, players can raise or lower the challenge based on the child’s skill level using variations provided for each game. There are also hints provided for each game that can be used to give children the appropriate amount of support and help. You can find links to the games at the bottom of this post.

First, you’ll need to find a standard deck of playing cards. You can buy them in drug stores everywhere and they are inexpensive.

Here’s how to identify which card game would be most effective for the child’s learning. You can also learn how to pick the card game that is just right for the child in this video tutorial. 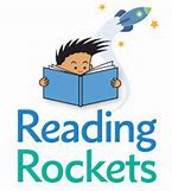 Reading Rockets has put out some great parent articles!

Children and Media: Tips for Parents

Are you wanting to help your child become a proficient reader?

This video series shows what it really takes to teach critical skills such as naming letters accurately, blending and manipulating the sounds in words, mastering the connection between letters and sounds, recognizing spelling patterns, and reading multisyllable words. 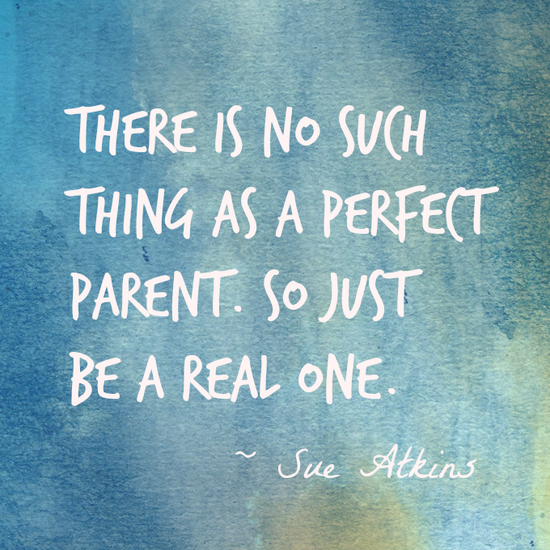 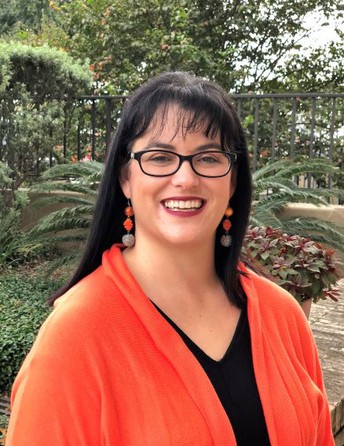 Kimberly enjoys living out in the country with her husband, Tyson and two daughters, Lynette & Lucy Sue.

1314 Hines, San Antonio, TX, United States kimberly.baumgardner@esc20.net 210-370-5431 esc20.net/parentresources
Embed code is for website/blog and not email. To embed your newsletter in a Mass Notification System, click HERE to see how or reach out to support@smore.com
close
Powered by Smore
Powered by Smore