Kolby is using Smore newsletters to spread the word online.

Get email updates from Kolby:

The crawling creatures of Australia

The crawling creatures of Australia

To the right Is a picture of a koala

What do You Eat, Koala?

Koalas absolutely love leaves from eucalytpus trees some leaves even give them water!! Also they eat leaves from gum trees! They eat for 4 hours a day, do you eat for that long?

To the left is a picture of a eucalytpus tree

Where Do You Live, Koala?

They spend most of their life in trees and in the woodlands. Koalas are usally found in eastearn Australia, Victoria, Queensland and New South Whales. In addition, koalas have been reported in smaller population clusters around the offshore island groups of kangaroo, phillip, and French island as well as the mainland adelaide region along the Murray River!!

To the right is a map that shows where koalas live

Koalas are really only active at night but during the day they sleep up to eighteen hours in one day!!!They sleep in trees and to protect themselves from falling they wrap their arms around the tree.That's a lot of sleeping time. I bet you don't sleep that long!!

When koalas are young they are the size of a jellybean!!! They are up to 3 feet long and weigh about 14 to 20 pounds. Male koalas are in average 30.7 in./ 78cm and female koalas are average 28.0 in/ 72 cm. They have shaggy ears, rough pads for gripping eucalytpus trees.

To the right is a diagram of a koala

The koala population is growing smaller and smaller because people are killing them for their fur. People are destroying the koalas habitat and they are cutting down eucalyptpus trees which is koala's food. 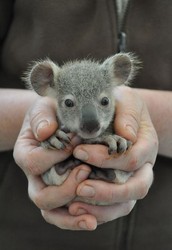 Koalas have pouches in their stomache, and their babies live in the pouch for six months. Koalas have to be really carefull because if their baby fall's out of the pouch the baby will die. Koalas live up to 13 to 18 years old, and once they are adults they live alone. Baby koalas feed off of what the koala digests.

To the right is picture of a baby koala

Eucalyptpus tree:( Yoo-kuh-lip-tuhs ) A tall tree that grows in the forest.

Clusters: ( Kluh- sters) A number of things the same kind. 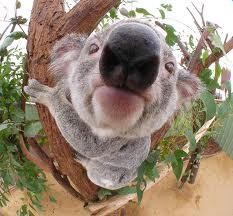 Kolby is using Smore newsletters to spread the word online.