Get email updates from student: 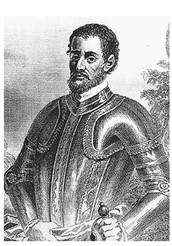 Hernando de soto is from Spain. His motives were to control other lands,To spread Christianity and to find gold and silver. He arrived on the coast of Florida in 1539. He explored most of the Southeast and treated the Native Americans poorly. His accomplishments were introducing the Native Americans to iron tools. He found only pearls,seashells,copper and mica.