Get email updates from Seamus:

The Columbian Exposition and Its Relevance to Modern Chicago

The Columbian Exposition and Its Relevance to Modern Chicago

What was the Columbian Exposition?

The Columbian Exposition 1893 was an event designed by Daniel Burnham and Frederick Law Olmsted.

The Columbian Exposition or The Chicago World's Fair was dedicated in Chicago on October 21, 1892. The Exposition commemorated the four hundreth anniversary of Christopher Columbus's landing in the New World. It was, however, not open to the public until May 1, 1893, missing the anniversary by about eight months.

The Exposition took up about six-hundred-and-thirty acres with buildings featuring a neoclassical architectural theme. In these buildings were sixty-five different exhibits from across the world.

Some of the people that attended the Columbian Exposition include Frederick Douglass, who was an avid abolitionist and Scott Joplin (below) - the ragtime musician who composed such pieces as "The Entertainer" and "Maple Leaf Rag".

The Exposition was attended by people from all over the world. 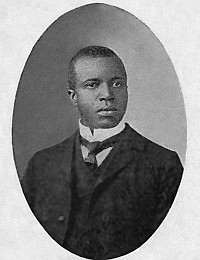 "...there are some people who are letting the chance of seeing this White City, that rose like a Venus from the waters of Lake Michigan, slip from them forever," said Richard Harving David about the fair, "They are missing the greatest event in the history of the country since the Civil War."

Another man, Eggleston, was overwhelmed by the Exposition. He says, "I saw so many wonderful things I hardly know what I liked most, and everything is so confused in my mind I hardly know now what I did see."

Not only did the Exposition raise millions of dollars for the city of Chicago, but it also sparked the creation of the City Beautiful movement, which affected Chicago architecture. It influenced the rise of consumerism in Chicago and America and began the association of consumption/shopping with fun.

As Julie K Rose says, "The advent of the consumer-based society in America received its first major expression and celebration at the World's Columbian Exposition."

The Exposition also brought many cultures into Chicago.