Get email updates from Sruti: 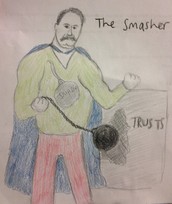 William H. Taft served in office from 1909-1913. He was nominated for presidency on the Republican ticket and was Roosevelt's successor. However as his presidency continued, Taft broke away from Roosevelt's ideas, causing the Republican Party to later on split. Taft, unlike Roosevelt, did not believe in excercising presidential power and was more focussed on the status quo. He alienated a lot of his supporters when he did not follow up on his platform of reducing high tariffs. Despite these flaws, Taft was an able trust buster (or smasher) and managed to file 90 suits against the trusts compared to Roosevelt's 44 trusts. 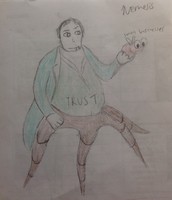 Evil Nemesis- The Competition Killer aka The Trust

Trusts involved "horizontal integration" where various companys would ally with each other so as to monopolize their market. Soon many companies such as US Steel began to grow out of control by using trusts. Trusts were a prominent problem during Taft's presidency. They corrupted public officials so that the officials would not restrict the trusts; the big business owners as well helped finance campaigns so the political leaders would be more inclined to let trusts continue. In addition, they also eliminated competition, thus causing prices to be very high for the consumer. Trusts destroyed small businesses as they could not fairly compete with trusts. The Sherman Antitrust Act in 1890 was ineffective at curbing the trusts but was instead used to curb labor unions, allowing the evil nemesis to continue on growing. Lastly trusts allowed coorporate businesses to grow unchecked and grow too powerful in political and economic power.

Ida Tarbell was a promient muckracker during this time, who wrote in the McClure's Magazine. She exposed many evils in society. Most importantly, she wrote an expose on Standard Oil Company after her father was ruined by the company's trusts. In the 19-part series published in November 1902 to October 1904 called "The History of the Standard Oil Company", Tarbell eloquently discussed how Rockefeller used unethical tactics that destroyed independent Pennsylvania oil workers, such as her father. Her piece influenced the public immensely and opened their eyes even further to the horrors of big businesses and trusts, allowing Taft to file many suits against trusts-especially the one against Standard Oil Company. This expose is still to this day considered an excellent piece of investigative journalism.

Taft relied on the Supreme Court to help break down trusts and the Sherman Anti-Trust Act; throughout his presidency William Taft filed 90 suits against trusts, one of which was against the powerful Standard Oil Company. The most impactful suit that Taft filed was against the Standard Oil Company and the Supreme Court used the "rule of reason" that stated that only the businesses that unfairly restrained trade were illegal. Not only did Taft's adminstration go up against the Standard Oil Company but he filed a suit against the U.S Steel Corporation, which caused a rift between him and Roosevelt. In addition, the Mann-Elkins Act was passed that allowed the Interstate Commerce Commission to suspend railroad rate hikes, prohibiting railroads from charging a higher amount for short hauls than long hauls. The act as well expanded the ICC's juridiction to telephones, telegraphs and radio. Lastly, the act helped lessen public anxiety and was a foundation for greater systems for regulating trusts in the future.

Follow Sruti Gorantla
Contact Sruti Gorantla
Embed code is for website/blog and not email. To embed your newsletter in your email, click HERE to see how or reach out to support@smore.com