Get email updates from Isabel:

The Rwandan Genocide was a mass slaughter that started in April of 1994 and lasted 100 days. The Genocide started when two ethnic groups were fighting and could not keep peace, the Rwandan President Habyarimana was assassinated after he signed a form saying that the two groups were going to live peace. After he was assassinated the Hutus and the Tutsis start fighting and killing each other. Friends went against friends and neighbors went against neighbors. During this fight the UN didn’t help because It was too much money and also to risky. Over that period of 100 days, over 800,000 tutsis and hutus died. 2 million refugees fled the country in fear of being attacked and killed.

The Sudan genocide began February 26th, 2003. It started out not being noticed, being shadowed by the battle in Iraq, killing 350,000 to 400,000 people in just 29 months by means of violence, malnutrition, and disease in the first genocidal rampage of the 21st century. The two rebel groups : Sudan liberation Army and the Justice and Equality Movement made rebellion against the Sudanese government because of economic influences and insecurity. One of the reasons the genocide was started was because a lot of the people in the village where rebels and they wouldn’t convert to the religion of Arabist. Although this is a very scary and terrible time in Sudan, not nearly as bad as the one that occurred in Rwanda.

Sudan is at risk of genocide and they need help! There are many ways we can help them. We need to get involved! We can donate money to www.endgenocide.org to help Sudan with food, shelter, and water. We can spread the word using social media. We can start our own organization, if you look at the endgenocide.org, they give great advice to help you plan your own organization. We can write letters to the editorial board to publish in your local newspaper. We can make a flyer and put them up in stores. We can also send letters to the UN troops and ask them to head over to Sudan to help the people in need. We can send letters to the op-ed. We can post things on a blog. We can also host our own events. 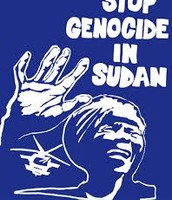