The Anglo-Spanish War was an intermittent conflict between the kingdoms of Spain and England, that was never officially declared as a war. The war was defined by multiple battles.The conflict began in 1585 with the military expedition of England in support of Holland,a prominent Protestant country, that was fighting for independence from King Philip II. Much political and religious tension was in pre-existence between England and Spain. Spain felt that Mary, Queen of Scots, was the rightful heir to the throne over Queen Elizabeth. Mary was a devote Catholic, whereas Elizabeth had been excommunicated from the Catholic Church and was leader of the Church of England. In 1587, Queen Elizabeth I executed Queen Mary. Mary, by deed of will, left her throne to King Philip I. Since Spain recognized the throne of England as Mary’s they began their conquest to gain the throne from Elizabeth, intensifying the tension between England and Spain. Following approval from Pope Sixtus V, Philip collected crusade taxes and assembled 130 ships, 8,000 soldiers, and 18,000 sailors. In May 1588, the Spanish Armada sailed towards the Netherlands to gather additional troops for the England Invasion. The English navy defeated the Armada at the Battle of Gravelines before they could acquire additional troops. The Armada was forced to sail around Scotland where it suffered further damage and loss of life from stormy weather. By defeating the Spanish Armada, England continued to send support to the Netherlands and France (although they reaped few tangible awards from assisting Philip II’s enemies). The Armada’s failure was seen as a “sign” from God that he supported the Protestant Reformation, which boosted morale at the time.

The English Armada was under the command of Drake and Sir John Norreys. This Armada was dispatched to demolish the Spanish Atlantic Navy in 1589. The Armada was intended to capture Spanish treasure fleets and rid Portugal of Spanish control. The English Armada was a failure due to poor organization and incompetence. Since Elizabeth had invested deeply to finance the expedition of the English Armada she suffered extreme loss to her treasury. The Spanish rebuilt their navy, with “The Twelve Apostles”, a twelve massive galleons, improved their convoy system, and intelligence networks. The Nine Years war of Ireland began in 1595, where Ulster lords Hugh O’Neill and Red Hugh O’Donnell rose up against the English with great Spanish support. The English were distracted by the rebels of Ireland and the Spanish attempted two more Armadas, in 1596 and 1597. Both were frustrated by inclement weather. King Philip II passed away in 1598 and his successor, Philip III, continued the war in a less motivated manner. In 1601, the final Spanish Armada was sent north to assist the Irish rebels. The Spanish were immediately besieged by the English and accepted terms of surrender while the Irish continued their fight until 1603, shortly after Queen Elizabeth’s death. King James I ascended to the English throne and immediately negotiated peace with Philip III of Spain. The negotiation and conflict concluded with the Treaty of London in 1604.

The main significance of the Anglo-Spanish War was the effect it had on the Spanish empire- which shrunk following the conclusion of the war. The nationalism that was inspired by English victory brought a new wave of colonies in the New World.

Course of the events

The Nevilles of Durham and Percys of Northumberland plot to overthrow Elizabeth I and reinstate Roman Catholicism in “The Rising of the North”. Pope Pius V heard of the revolt and decided to help the rebels by deposing Elizabeth. The rebellion failed but the Pope's action increased her distrust of Catholics 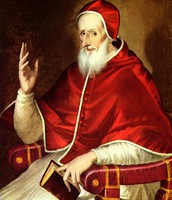 The Catholic Church excommunicated Elizabeth I

St. Bartholomew's Day massacre where French Protestants were massacred by French Catholics in Paris which was witnessed by Sir Philip Sidney, Sir Walter Raleigh, and Sir Francis Walsingham. Similar atrocities elsewhere in France result in thousands of deaths and caused panic in England with fears of a Catholic invasion 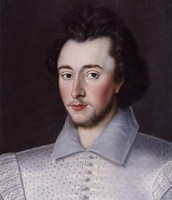 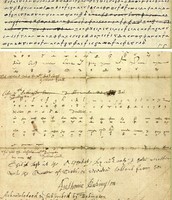 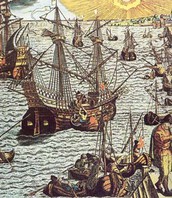 The Spanish Armada of 132 ships is defeated by the English fleet of 34 ships and 163 armed merchant vessels under Lord Howard of Effingham, Sir Francis Drake, and Sir John Hawkins

Spanish forces land in Cornwall, England and burn the town of Penzance 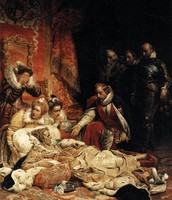 Queen Elizabeth I dies and James I of England, James VI of Scotland, (great-great-grandson of Henry VII) is proclaimed King 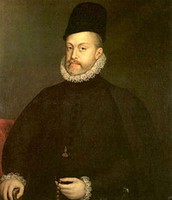 King Philip II of Spain, also known as Philip the Prudent, ruled one of the world's largest empires. His reign as Spain's king began the Golden Age, a period of great cultural growth in literature, music, and the visual arts. He was also the King of England through his marriage to Mary Tudor for four years. The Philippines, a former Spanish colony, are named after him.

Mary was the cousin of Queen Elizabeth I, she was viewed by the pope and the majority of Catholic leaders in Europe as the rightful heir to the British throne. Scottish nobles forced the Catholic Queen to resign from the throne and Queen Elizabeth arrested and executed her.

The outcome of the Elizabethan War with Spain from 1585 - 1604 was: In 1603 the war with Spain officially ended. King James I issued a decree that all acts of piracy must cease

The main significance of the Anglo-Spanish War was the effect it had on the Spanish empire- which shrunk following the conclusion of the war. The nationalism that was inspired by English victory brought a new wave of colonies in the New World.