Riddhishrree is using Smore newsletters to spread the word online.

Get email updates from Riddhishrree:

Creator of the first American Flag

Creator of the first American Flag

Philadelphia, January 1st, 1752. Betsy Ross, the soon to be famous creator of the American Flag was born. It was the time when the Revolutionary War was boiling over the British and the Colonists. Betsy had no idea, that she was going to be the one to sew America's first flag.

Betsy Ross was born on January 1st 1752. She was born into a big, bustling family of Quakers, a religious group, that believed in living in a simple peaceful way. Betsy lived in a small farmhouse, on 4th and arch streets. Chickens clucked loudly as Betsy and her sisters scurried around tossing them tiny seeds. Betsy's mother cooked the children's food and the boys came in carrying a basket of freshly picked crops. One of Betsy's sisters struggled to feed her younger brother who was crying, his arms flailing around. Betsy's chores included sewing the snow white caps that she and her sisters wore every day. She was the eighth of seventeen children, and was the great grand daughter of a carpenter.

Pictures of the Revolutionary War, and Betsy's time period

Corn was a crop that was grown in the colonist's farms.

Betsy Ross is busy sewing the American Flag for George Washington and the colonists.

Betsy Ross attended the Friend's School with other Quaker's and children from wealthy families. The school taught reading, writing, arithmetic, geography and history. The student's also preformed a four hour task each day. Betsy used this time to sew. She enjoyed creating quilts, and samples with complicated designs. Betsy's needlework was the most beautiful in Philadelphia and she won many prizes for it. 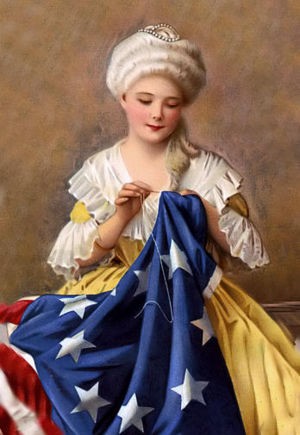 When Betsy was a teenager, she was allowed to work outside the home. Her parents let her work for an upholster, sewing the coverings for sofas chairs and other furniture. In the shop she met a worker names John Ross, and they fell in love. He wasn't a Quaker, and the Quakers and her parents disapproved their relationship. However, John Ross and Betsy married anyway.

At this time, the Revolutionary War was also taking place. Although everyone knew about the fighting, business went on as usual and John Ross and Betsy set up a small shop. They worked hard to make their business succeed. John eventually died while fighting the war, even though Betsy tried her best to help him recover. Betsy was now a widow who ran her business alone. After work, she made musket balls to help the American cause, going against the Quakers peaceful ways. General George Washington wanted the colonials to have a flag. It would be a symbol of the Colonial independence from England, and it would stand for the colonies fighting together. He made a design for the flag and one of his close friends, John's uncle, suggested Betsy sew the flag. 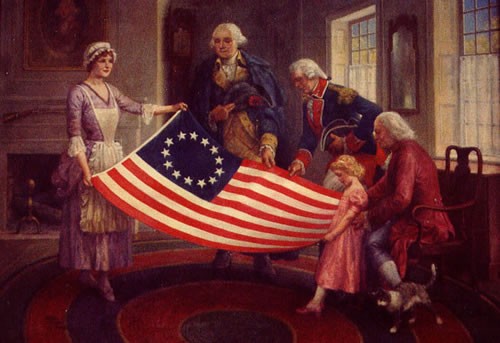 The three men went to Betsy's shop and George Washington showed Betsy his sketch of the flag. Betsy, however, had different ideas. She wanted the stars to have 5 points instead of 6, and she thought the flag would wave better in the wind if it was rectangular shaped instead of square. The men all agreed Betsy's design was better, and she agreed to sew it. Betsy worked very carefully sewing the American Flag. She sewed thirteen stars shaped like a circle on a blue field. She placed it against thirteen red and white stripes.

During the war, Betsy became well known for her beautiful flags, and her reputation grew well. In 1777, Betsy married another husband named Joseph Ashburn, a sea captain who was often away from home. During one of his voyages, British soldiers occupied Philadelphia for a few months. Many citizens left the city, but Betsy stayed to run her business. Soldiers camped in her house and even though Betsy was polite to them, she always let them know whose side she was on. The soldiers started to respect this hard working woman and called her "the little rebel."

During a sea battle with England, Joseph was taken prisoner. In 1782, when the war was over, Betsy learned from a friend named John Claypoole, that Joseph had died in an English prison. Betsy and Joseph's first child, Zillah, had also died and their second child, Elizabeth, had been born. Now Betsy was a widow again. John Claypoole and Betsy's friendship grew. In 1783, John became Betsy's third husband. They joined the society of Free Quakers, which permitted marriage outside the faith. Betsy could pray in the church once again. Betsy and John had five children. John was a sea voyager, but Betsy asked him to come and work in her upholstery shop. John soon grew bored of the upholstery business and went to work for the U.S Customs House. He became ill in the last few years of his life and died in 1817. Betsy taught sewing to her family members, such as her grand daughters and her nieces. When they grew up, they helped Betsy run her business.

Betsy retired at age seventy-five. She did not have very good eyesight, and one of her children read the bible to her while she sat by the fire. Betsy enjoyed telling stories about her life, and her favorite story was the one about making the American flag.

Betsy died in 1836. The people who knew her told her story about the flag. Finally, in 1870, her grandson, William J. Canby made Betsy's story public in an address to the Historical Society of Pennsylvania. Betsy was buried on Arch Street in the garden of the house she once ran as an upholstery shop. The flag of the United States flies every day over her grave. Today, Betsy is remembered for making the first American Flag, the symbol of America's freedom.

John Ross's uncle was the one that suggested that Betsy should sew the flag. If Betsy had followed her Quaker tradition, she wouldn't have married John Ross and John Ross's uncle wouldn't have suggested her to make the flag in the first place. Betsy Ross making the American flag was possibly a result of her marrying John Ross, and disobeying her Quaker faith. Sometimes, if you believe something is right, even though others think its wrong, you should trust yourself to make the decision. Betsy Ross became a confident woman, because of all the events, tragic and happy, that had occurred in her life.

Betsy Ross is an amazing patriotic, and hardworking person who was able to sew the symbol of our freedom. Thank you for reading this article! If you want to learn more about Betsy Ross, watch the video below.
Betsy Ross The Movie

Carpenter- a person who makes and repairs wooden objects and structures.

Quaker- a member of the religious society of friends, a Christian movement devoted to peaceful principles.

Revolutionary War- the war for American independence from Great Britain, 1775-1783

Tragic- causing or characterized by extreme distress or sorrow.

Upholstery- soft padded textile covering that is fixed to furniture such as armchairs and sofas OR the art or practice of fitted padded coverings to chairs or sofas.

Widow- a woman who has lost her spouse by death and has not yet remarried.

It is not CONFiRMED that Betsy Ross made or designed the flag, but many historians believe that she did.

Riddhishrree is using Smore newsletters to spread the word online.