Get email updates from courtney:

1. In 1787,delegates to the constitutional convention met to create a document of basic laws and principles forthe new country.

2.the debate and deal making of constituional convention of 1787 took place at philadelphia's state house.

3.after a long summer of negotiation, delegates from twelve states signed the u.s constitution on september 17,1787.

4.congress modified article II of the constitution to help prevent presidential elections without a clear winner

5.congress modified the electoral vote in this sketch from the 1800's. after the first presidential elections, these votes split increasingly along party lines

6. casting a ballot in voting booth is just one part of process of choosing a president.

7.when citizens cast a vote for president, they are actually voting for the electors of president and vice president.

9.after the general election, electors from all votes.

10.jimmy carter and wife rosalynn wave after his 1976 win over gerald ford,carter by only fifty-seven electoral votes

12. bill clinton and al gore celebrate after their 1992 win.

13.the u.s constitution is a living document that can be changed with the times.

15.a majority of states ratifies the constitution.

17.states ratify the twelfth amendment, which states that electors will cast one vote for president and vice president.

19.the senate elects Richard Johnson as vice president after Johnson fails to win. 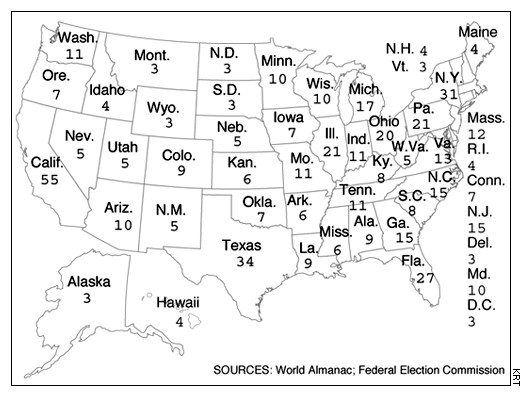