Get email updates from bella:

The capital of Argentina is Buenos Aires. With a population of 2,891,082

A side ways view of the capital

A picture of the front of the capital

Pampas is seen in the picture below. Also covering 750,000 kilometers. With good amounts of rainfall it has great soil for agriculture. The Patagonia border line area is covered with mountains, deserts, and steppes. While the Uruguay river runs 1,838 kilometers and was formed during the Ice Age. 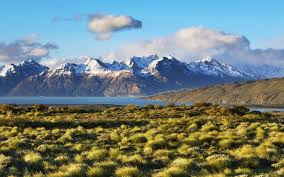 Historical Sites and Landmarks: Casa Rosada - is a presidential palace. La Recoleta Cemetery - is a cemetery for the deceased and wealthy Argentineans. Catedral Metroplitana - is a eighteenth century building for Catholicism. Nuestra Senora de Loreto - was a mission. Plaza de Mayo - is a famous square.

Iguazu Falls - is a river border for Argentina and Uruguay. Seperating the upper and lower levels of Iguazu. 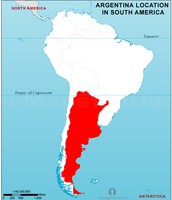 A map of Argentina 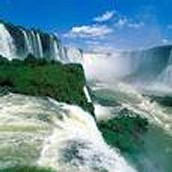 Government - They have a federal government. Where their president serves four terms and is reelected once. Also having seventy two senators.

Famous People - Argentina's current president is Mauricio Maric. He is a civil engineer and politician. Also bieng the first democratically elected president since 1916. The vice president is Amado Boudou. He also from 2009 to 2011 was the Minister of Economy. Lastly the former president of Argentina is Cristina Fernandez de Kirchner. Who now is a lawyer and politician.

Is the current president of Argentina

Is the former president of Argentina

Is the vice president of Argentina

Religion, Language, and Food - The main religion is Catholicism. For breakfast they have croissants and dulce de leche. Which is a milky drink mixed with caramel. For lunch they mostly have empanadas filled with beef or chicken. Another common food is tamales filled with cheese, meat, or both. For dinner they have Gnnochi with is a potato pasta and Asado

which is different cuts of meat.

Seasons/Climate, Sports, and Music - The most played sports are football,basketball, rugby union, tennis, and rowing. The more popular genres in music in Argentina are folk, pop, classical, and most popular is Tango. They have the standard four seasons.(winter-june to Aug., spring-Sept. to Nov., summer-dec. to feb., fall-march to may). The climate is mostly warm and dry, with some places more humid then others. The highest temperature recorded there being 120 degrees Farenheit. And the lowest temperature being -27 degrees Faranheit.

Breif History - The Eurpopeans arived in 1502. Where the Spanish settled and colonized in current Argentina. The British tried to invade and finally it was declared that all of Spain had been conquered. years later in1825 Argentina was finally recognized by the British that it was an independent country.

Natural Resources and Indigenous group - Petroleum, gas, and uranium are the biggest natural resources in Argentina. While a lot of the Argentineans descend 65% from Europeans and 31% from Amerindians. Early on their were a lot of small groups that were seperated and didn't really engage with each other. Now though they aren't their anymore.

Tourist Attractions - La Boca -is a funky neighberhood with a European twist to it. Perito Moreno Glacier - is known for amazing treking tours. Parque de la Costa - is a cool and big amusement park. La Boneras Stadium - is well known for its flat shape. Teatro Colones, Buenos Aires - is the third best ranked opera house in the world.