Get email updates from brett:

Meth is a whitish or yellowish crystalline powder, crystals or pill. It can be snorted, smoked, injected, or swallowed. It is composed of pseudoephidrine, a decongestant, and a number of toxic ingredients such as dry cleaner or lye.

Meth can be prescribed by a doctor but its uses are limited and it is taken in much smaller doses than abusers.

Meth is a synthetic stimulant, which excites the central nervous system. It causes an increased alertness or physical activity, elevating mood and energy, and then leads to rebound depression and anxiety.

Meth increases the release and blocks the reuptake of dopamine, causing a high amount of dopamine in the brain. Since dopamine is involved with pleasure and reward large releases of it in the pleasure centers of the brain cause a rush or euphoria.

These effects can still be present years after using meth

Physical: chemical and molecular changes in the brain, lack of energy, aches and pains, 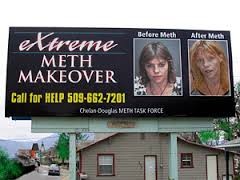