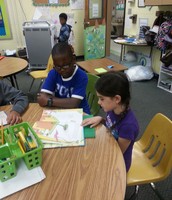 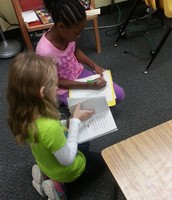 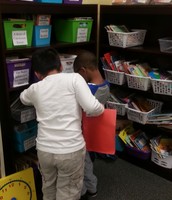 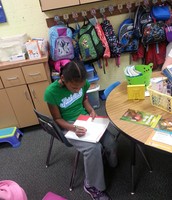 Please continue to encourage your child to read 30 minutes every night. It is important for your child to have as many experiences and opportunities with the text, as possible, to continue growing as a reader.

Your child shared his or her Westward Expansion Inquiry Project on Tuesday. Our research projects were driven by a need to know about a specific area of interest from our Westward Expansion unit. Once the topic was determined, we developed 5-8 questions to guide our research. As we learned more information, we revised or formed new questions. We discovered a lot about being an effective researcher! For example, sometimes our topics are too broad or too specific, we may need to try new resources, primary resources can give us lots of information, and it's all about asking the right questions.

Our Westward Expansion unit with conclude tomorrow with a unit test. Our guiding questions for the unit were: 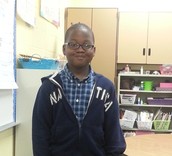 My friend Miles is short,9,funny and wears glasses.He is afraid of dragonflies because they look like bees.Loves to play video games,Out back and doing math because it’s hard.

He wants to be a comedian because he wants to make BIG$$$$$$$$.He wants to live in Florida when he grows up.He likes Teen Titans,wants to play every video game,shapeshift and make himself young whenever he wants.

If he had one day to do anything,he would play every video game.He would want to go to Washington because of the fantastic places.

I am writing about a boy that I just recently met and his name Sean.We had never talked before and I was surprised to be paired up with him. After interviewing him I am happy that we were partners. I bet nobody else had someone as interesting as Sean. I started out with asking all questions but if he didn’t have an answer I just moved on. He also said he was done with questions and I respected that. I was interested in what he had to say and what he was thinking.

The first question I asked him was what is your biggest fear? He knew right of the bat that his biggest fear is heights. I know a lot of people that are afraid of heights. Now I can add one person to my list. I asked him why he is afraid of heights and I believe that he said, “I really don’t know why but it is just scary to me.” Recently I went to Colorado and I went to the top of Pike’s Peak. It is over 14,000 feet high. I wasn’t scared at all. I stood on the edge so that I could see better. You can see hundreds of miles away. My dad was scared that I was going to fall. I bet Sean would not have liked it up there!

The second question I asked him was “What is your favorite subject in school?” Science! He thinks that Science is fun to learn. He likes doing experiments. He can tell you pretty much whatever you want to know about. Sean said there is so much to learn about. He even says he wants to be a scientist when he grows up.

My next question was how many siblings do you have? Sean has only one brother. His name is Sam. Sam is a couple years older than Sean. He says that his brother is annoying. I have a older sister so I can relate to him saying he is annoying. He says he can be mean sometimes and other times he is nice. That is probably true about most older siblings. He like’s his brother though. Siblings have weird relationships.

I asked the question what do you think you will be doing 20 years from now? Sean says he thinks that he will be doing science in 20 years because he loves science a lot. He has a strong passion for science and he has a strong grip for science. I think that he would be very successful in the science business. He shouldn't give up because you should not give up on your dream.

What do you do for leisure time, meaning for fun? That is what I asked Sean. He said he likes to play video games when he has free time. His favorite video game is very popular, it is Halo. I do not know how to play Halo but he seems very found of it.

My favorite answer of Sean’s was when I asked, “If you could be anyone or anything for one day, who or what would it be and why?” His answer was a cat because he would be able to jump farther than normal and would be able to scratch things and get away with it. Also, he would be able to move around faster than he can as a boy. I personally wouldn’t have chosen a cat but it is a interesting and logical choice.

The eighth question that I asked him was, “ If you had money to help anyone or any group of people in the world, who would you help and how would you help them?” He picked an endangered animal - the red panda bears. The reason why he would help the red panda bear is because they are cute and they are an endangered species. That is very sweet of him to think about them.

I asked him, “If you had three wishes, what would they be?” He said he would wish for a Red Panda for a pet. He would wish for a mansion because it would be fun for his entire family.The mansion would have a large variety of pools in the backyard and a lot of grass to play in. He did point out that a mansion would be a lot to clean. His third wish was that he would want a trampoline park to run. The reason why he had picked to run a trampoline park is because it would be a fun experience for kids and because he could earn lots of money.

In conclusion of my article about Sean it was an honor to be able to interview him. He is very nice, sweet, interesting and fun. Maybe he could become a scientist that actually will help the Red Panda. Sean sure has a love of science! 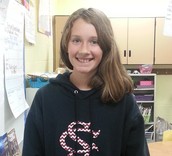 Maddie loves parrots as you can see like these ones.

She has a fear of being in an avalanche which would freeze her to death.

Math is Maddie's favorite school subject because it is fun to her and because she loves math.

Maddies favorite shirt is the shirt that she got from camp.

If she could be anything or anyone she would be herself.

She loves math because she is good at math and that it is fun to her.

She loves her camp shirt.