Get email updates from Delaney:

Women of the Wild West

By: Delaney, R.J., Mayra, and Caitlin

Women of the Wild West

By: Delaney, R.J., Mayra, and Caitlin 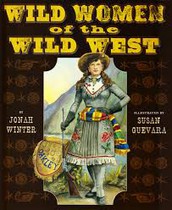 * For thousands of enterprising females, the Wild West afforded the opportunity to make some money, and even to claim unprecedented legal rights.

*Evidence proves the first woman to be elected to the US House of Representatives (Montana’s Jeannette Rankin), the first woman governors of states (Nellie Taylor Ross of Wyoming and Miriam Ferguson of Texas), and the first woman mayor of a major city (Seattle’s Bertha Knight Landes) all hailed from the West.

* Western women were encouraged to identify and hold property in their own name, so families could increase their family's holdings. This led to some women running ranches and farms by themselves, including supervising male employees.

* Between 1880 and 1910, it is distinguished that the increase of music teachers rose considerably from 42 to 61 percent, granting middle-and upper-class women as the “chief promoters of culture.

* It was permitted in the early 1900's, however, to have women participate in ragtime and vaudeville bands as primarily pianists and composers.

*The women’s bronc riding was scratched from Pendleton, and by 1941 the event was banned from all major competitions, including Madison Square Garden.

"I shall not consent to be tried under a law in which my sex had no voice in making.”- Pearl Hart

“I am a friend to any brave and gallant outlaw.”- Belle Starr

“God intended women to be outside as well as men, and they do not know what they are missing when they stay cooped up in the house.”- Annie Oakley

Notable Women of the West 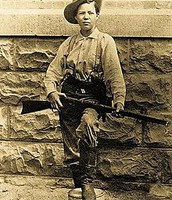 Pearl Hart was a stagecoach robber that lived in the Wild West. Pearl had a husband that was a gambler, and from attending shows of other women in the west, she was inspired to leave him and get her own job. Soon after, she had children and got back together with her husband, and they gambled together, but didn't last long. Hart had gotten a new partner that was a miner who helped her rob stage coaches, and become a bandit to support her new life in the Wild West.

Annie Oakley was a woman who grew up with incredible talents. She was good at her shooting skills, and found herself a husband who was also remarkable at shooting, and they went into business together. She joined Buffalo Bill’s Wild West Show, and amazed audiences with her amazing aim and skill with guns. She became successful, earning money and touring, and eventually retired.

Belle Starr was a woman outlaw in the times of the Wild West. She is known for committing crimes and living a dangerous life, along with the male partners in her life. She was known for stealing, and getting arrested from assisting with criminal acts. Her murder later on in life became an infamous event. 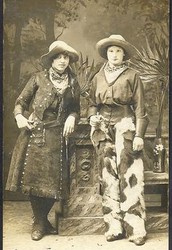 Women's Significance in the West

Many women were left behind by their husbands, and had to develop a new life in the Wild West. These women in the west had many different opportunities bestowed upon them, and they had to make the most out of it. New common occupations of women were gamblers, prostitutes, artists, prospectors, actresses, and even musicians. Women's main role was no longer cooking, cleaning, and childcare. Women's lives had a new purpose, and new chances for them to be a whole new person in the Wild West, and most of these women demonstrated just that.

"Annie Oakley Quotes - The One and Only Annie Oakley." Google Sites. N.p., n.d. Web. 23 May 2017. <https://sites.google.com/a/marlboroschool.net/the-one-and-only-annie-oakley/annie-oakley-quotes>.

"Not Just a Housewife: The Changing Roles of Women in the West." National Cowboy & Western Heritage Museum. N.p., n.d. Web. 23 May 2017. <https://nationalcowboymuseum.org/explore/just-housewife-changing-roles-women-west/>.

"Women of the West." The Gilder Lehrman Institute of American History. N.p., 05 July 2012. Web. 23 May 2017. <https://www.gilderlehrman.org/history-by-era/development-west/essays/women-west>

Follow Delaney Church
Contact Delaney Church
Embed code is for website/blog and not email. To embed your newsletter in a Mass Notification System, click HERE to see how or reach out to support@smore.com
close