If you are participating in the Greenville Drive Reading All-Stars program, reading logs are due on Friday!

Students in 3rd, 4th and 5th grade who read 5 books during the designated 5-week time period (Monday, February 10 – Friday, March 14) will qualify as a Greenville Drive All-Star and receive a voucher that may be redeemed for a ticket to the Celebration Game on Tuesday, April 22nd, at 7:00 PM.

The March of Dimes Reading Champions is an educational program in which every child is a winner! Students read books to improve reading skills while raising money for the March of Dimes mission! This program takes placing March-early April. After completing the program, children receive awards for their efforts.

Students receive medals during awards days based on the number of books read. After raising $1, students are eligible for the following medals:

Bonus: Every participating school will have a Caldecott Award winning book donated to the library. This book will be placed in the library in honor of the student who raises the most money! Every child who raises $50 or more will receive a free tshirt.

Reading Champions program packets were sent home last week. Make sure to mail off your registration card (or register online at marchofdimes.com/southcarolina) as soon as possible, and start reading! Gather pledges and any other donations and place them in your collection envelope. No amount is too small!

Tell us how much you love the library!

Express your love of the library with our newest display! Come to the library, fill out one of our hearts, and we'll add your message to the wall!

Have you ever taken a selfie? Well, go one step further, and take a "shelfie!" What's a "shelfie?" It's a picture of you in front of your bookshelf! Ms. Knight is creating a display of "shelfies," and she wants your pictures! The display features teachers, students, and even family members! 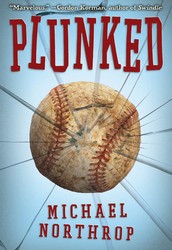 Book of the Week: Plunked

To paraphrase that gem of baseball cinema, The Sandlot: For Jack Mogens, baseball is life…and he’s good at it. This sixth-grader is looking to start in left field this year. He just needs to convince the coaches that he’s the man for the job. Jack’s got to be an outstanding outfielder and a top-notch hitter to claim the spot. Somehow, everything works out, but things won’t stay great for long.

In the first game of the year, Jack is plunked by an inside pitch (his worst enemy). His cage gets rattled…as do his nerves. Now, at every at-bat, all Jack can think about is getting hit by another pitch. Fear is taking over his waking–and sleeping–hours, and Jack doesn’t know how he can possibly get over this and get his head back in the game.

It’s not exactly easy to get over being hit in the head by a pitch, especially when one of your own teammates seems bent on making it happen again. Jack just can’t let go of what happened to him, and it’s starting to cause problems with more than just baseball. He’s having nightmares. His relationships with his parents and friends are also suffering. Jack is lying to cover up just how badly this incident is making him feel, and he knows that his lies will eventually catch up to him.

Can he turn things around before he gives up the game he loves entirely? Or will being plunked kill his baseball dreams for good? Read Plunked by Michael Northrop to learn what one kid will have to do to get back in the game.

Students in 3rd-5th grades will participate in our state writing assessment on March 18th and 19th. Please be sure that students are at school, on time, get plenty of rest, and have a healthy breakfast. Encourage them to take their time and do their best!

The PTA Nominating Committee will be taking nominations for several PTA leadership positions. Officers for 2nd Vice President, Secretary, and Treasurer need to be filled. If you or someone you know would be great candidates for these positions, please fill out a form! Forms can be found on our website. Thank you for getting involved and supporting Fork Shoals School!

Students will make up three of the missed school days per the make-up days on the calendar March 7, 10, and June 6. The last day for students will now be June 6. June 3 is now a full day of school. The last three days (June 4-6) will be half days. No other information is known as far as the other three days that we missed. Once final legislation is approved for the other three days, the district administration will consider the impact of and date options for additional makeup days in making a recommendation to the Board of Trustees.