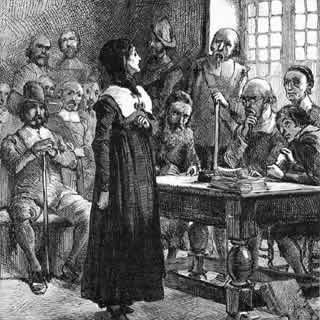 Inside Right (Back) Flap

Anne Hutchinson a women who stood up for her religious views. With only the writings of her "documents of the antinomian controversy principally the record of her two trials". Born in Alford, England learning from her father to question the religious teaching of the church of England. In 1634 she was against the precepts of the governing ministers which caused her to be banished. 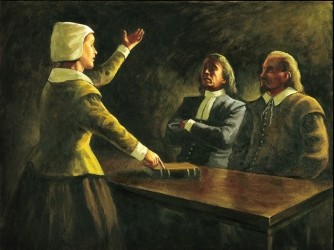 Anne Hutchinson born in Alford Lincolnshire, England in 1591. She grew up in a atmosphere of learning and was taught to question authority. In 1612 she married William Hutchinson both followers of Anglican minister John Cotton. After seeking in Boston Anne conducted weekly meetings in her home to discuss the ministers ways of religious sometimes gathering 60-80. She believed that with the grace of god one would be saved. After being banned from the church of Boston. In her last years Anne Hutchinson and her husband joined a colony which is now known as Portsmouth, Rhode Island joinging Roger Williams. Anne Hutchinson died in 1642