November saw the end of the farm unit for the Mott Class. We took all the information we gathered from books, from field trips, and from interviewing others and decided as a class to display our knowledge by creating the Mott Farm. First, we decided what we wanted to put in the farm. Then, we created a map of the farm to aid in construction. Different blocks were used to make the pens for the animals and pumpkins (we did not want animals in our pumpkin patch).

We created representations of farm animals with paper plates and clothespin legs. Our pumpkins were made out of Model Magic clay. After constructing our farm, we invited parents to come and tour the Mott Farm. While studying the farm, we learned how to make tally marks to gather information. Students interviewed various UFS staff and students and asked questions about farms such as “Do you live on a farm?” and “Do you have a horse?” We did many cooking and art projects to support our farm unit. This was a busy month. The last week of November, we deconstructed the Mott farm and prepared for a unit on Light.

During the month of December, we are remembering that everyone has a Light within them. We have been discussing “peace” and what it means to be peaceful. Students enjoyed exploring the science of light with flashlights and light bulbs. We even learned how to make a circuit using SNAP electronics!

The Mott Class has been practicing some of our gross motor skills, rhyming skills, and math language skills (tall, short, humongous, teeny, over, above) when acting out the nursery rhyme Jack Be Nimble.

We made our Wishes for the World and will share them with the school at Meeting for Announcements. The most exciting event in December was the Preschool Show! The Mott Class sang the songs we have been learning this year and ended the show with food and time to visit with family.

The preschool class has been learning about farms and, as we began to wrap up our extensive study, the children were asked how they would like to share their experiences with their families. Many ideas were discussed and they came to the conclusion that they wanted to create a movie about the farm.

Students became very excited and began choosing what kind of animal they would like to be in the movie. One little boy who loves trucks chose to be a tractor. As they began to write the story for the movie they decided that the tractor should get stuck in the mud. The children worked hard writing the story line and deciding what kinds of costumes they needed. The movie was first performed live for the parents and then was filmed in front of a green screen by one of our 8th graders. When the class was told that we would be finishing our study of the farm many children asked, “Why?” They seemed truly surprised to hear that we were moving on another subject.

In other news, the Hicks Class received a new guinea pig named Flo. The children decided that they wanted to change her name, so they created a list of possible names and, after a couple of weeks of conversations, came to the consensus that her name would be Goldie. Unfortunately, soon after that, Flo/Goldie passed away and we worked together to mourn and recover.

Students were actively involved in collecting food for our hungry neighbors by asking their families to send in groceries and by walking to the grocery store to do shopping of their own. When we returned, they counted each item and filled boxes to send to Open Link. 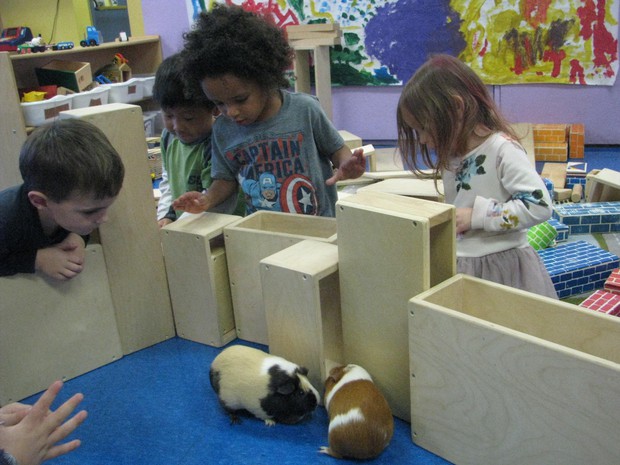 The Rustin Class built an elaborate playground in the block area as a culminating event after a study of playgrounds. We carefully planned our paths and structures. We created structures that move and structures that remained stationary. We lovingly placed figures of children and families in our playground. Students created gardens and a pond, filling the pond with water, fish and turtles. We carefully placed a small wooden boat with a child and grandmother gently sailing along into the pond. The class worked hard to create our playground. We invested our time, attention, and love into creating a space that everyone could live and learn in. Our playground stayed up for several weeks. Children returned to it over time to add things and to play. 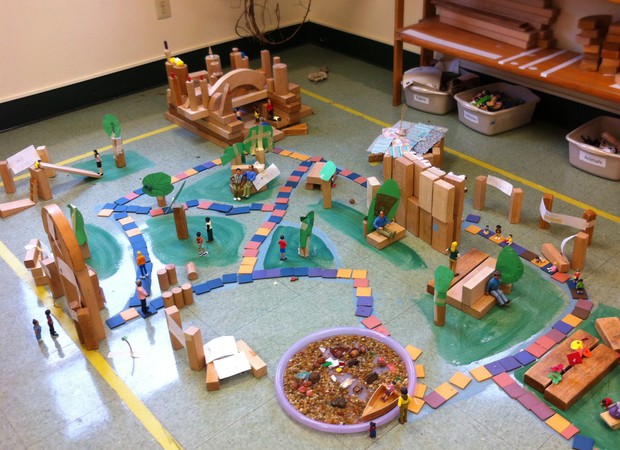 Then the unthinkable happened; the teacher decided to put a pipeline through the playground. She showed the children a bucket of black watery sludge, described it as crude oil and poured the water into a long rubber tube. The class spent several days reading books about crude oil and pipelines. We learned about oil spills and rescue workers’ clean-up efforts. Crude oil spilled, splashed, and made for an unpleasant sight. Just as the “pipeline” was raised overhead, the teacher asked, “should I put this through the playground?” “Do you want this to go through the playground?” Everyone felt the tension. The children's eyes looked up, unsure of whether they should go against the teacher and all of the power she holds. Voices finally rose and said, “no!”

We are never too young to think about our privilege and to care about others. One thing that is true is that young children care. They care a lot!

The Rustin Class talked about when pipelines break and oil spills or leaks onto land or water. We talked about the struggle the water protectors were having trying to prevent the Dakota Access Pipeline from going through the Missouri River and through historical sacred lands. We looked at books and pictures and made a poster. We explored the meaning behind the words Water is Life and Defend the Sacred.

We are happy to announce that Dakota Access will reroute the pipeline. We are hopeful that this is a permanent decision. We are hoping for permanent solutions that will help us care for our earth.