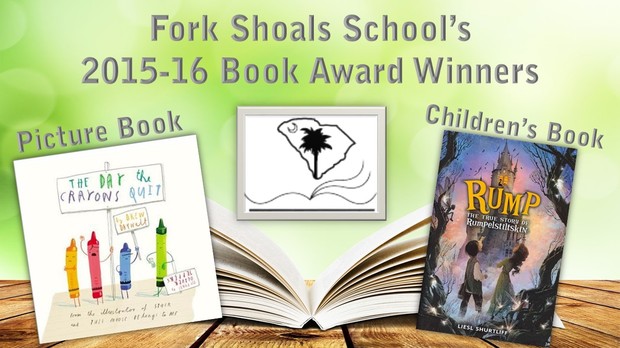 Students voted on their favorite nominees for this year's South Carolina Picture and Children's Book Awards in computer lab. The winners for our school are presented above.

Students' Book Award votes were then sent to the State level. The South Carolina Book Award winners will be announced at the annual SCASL Conference on March 4th, and Ms. Knight will share the news on March 7th.

To complete the program, students must read 5 books within the next five weeks. If the students reach their reading goal, they will qualify as a Reading All-Stars and will be eligible to receive free admission to the Reading All-Star Celebration Game on April 11th. Other incentives include a free t-shirt and book, recognition on the DriveVision, a parade around the outfield warning track, and a chance to throw the first pitch.

In order to qualify, please help your child complete the reading challenge and return the completed form to the library no later than March 4th.

All Fork Shoals students have received their reading logs for the 3rd quarter. Students should read as many pages as possible between now and March 18th. Reading logs MUST be turned in no later than Tuesday, March 22nd. We’ll have prizes for those who read the most in each grade level, and every participant will receive recognition.

All BoB team members should have read all ten of the books for competition by now. 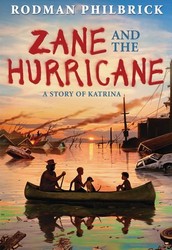 Book of the Week: Zane and the Hurricane

Zane and the Hurricane: A Story of Katrina by Rodman Philbrick is a nominee for the 15-16 South Carolina Children's Book Award.

Zane Dupree, a twelve-year-old kid from New Hampshire, is not exactly thrilled about spending a week in New Orleans. He’s never been there, he’s never met the great-grandmother he’ll be staying with, and he doesn’t really know what to expect from his visit. At least he gets to take his dog, Bandy, with him.

At first, things aren’t as bad as he thought they would be. His great-grandmother, Miss Trissy, might be an older lady who walks with two canes, but she sings like an angel, and she’s got a story or a song for everything. But stories and songs won’t prepare anyone for the storm about to hit the city. Hurricane Katrina is on her way, and Zane, Bandy, and Miss Trissy need to get out of New Orleans fast.

It should have been a simple evacuation, but Zane’s frightened dog leads him right back into the city that is soon to be destroyed. As Zane and Bandy hole up in Miss Trissy’s house, the storm hits. Winds scream through the long night, and, as morning dawns, Zane watches as water overtakes much of New Orleans. Their only hope is to make it to the sweltering attic and hope that help will come soon.

Help comes in the form of a canoe, a musician named Tru, and Malvina, a young girl with a joke for even the most somber of occasions. As Zane, Bandy, Tru, and Malvina navigate the waters that have flooded the city, they are confronted with death, destruction, and both the best and worst in humanity. Some people are willing to give aid to others even when they don’t have much themselves. Others either look to exploit the situation or only worry about themselves or saving things as inconsequential as Oriental rugs.

There seems to be no real rescue coming from any source, so it’s up to this foursome to save themselves. Zane and company have to stick together, even when it would be easier to leave someone behind, if they’re to have any hope of making it out with their sanity–and their humanity–in tact.

Family Math, Science, and Technology Night will be Monday, February 22nd. Pre-ordered meals will be ready at 5:30, and activities will begin at 6:00 PM.

The South Carolina Department of Education Office of Transportation is encouraging districts statewide to participate in the American School Bus Council’s “Love the Bus” campaign Feb. 22nd-26th. The “Love the Bus” campaign was designed to raise awareness and appreciation for school bus drivers. As a result of their dedication to ensuring that students are transported safely, bus drivers have made the yellow bus the safest transportation system in the country. Please help your child show appreciation to their bus drivers during this week. Making drivers feel appreciated does not need to be an expensive or time-consuming endeavor. Students can show their appreciation for bus drivers by creating cards, thank you notes, or making a sweet treat!

The display in the cafeteria is in honor of famous Americans who have made a difference. If any student wants to take action and write about one of the persons portrayed or any other American who has made a difference in our community, our state, or our country, they can showcase their work at this display. Many thanks to our social studies committee and PTA for putting the board together.