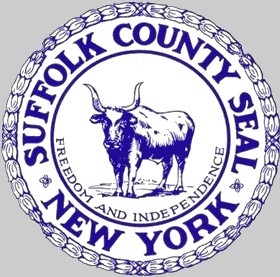 The Meadow Croft elves have been very busy these last few weeks planning, decorating, volunteering, organizing and making Meadow Croft BEAUTIFUL to celebrate Christmas at Meadow Croft 2022. We are so grateful to be able to open this home, once again, for the holiday season.

On Saturday December 3rd and Sunday December 4th from 12:00-4:00, Meadow Croft will be open to the public. Come see each room of the John Ellis Roosevelt estate alive with festive holiday decorations! There will be music played on the original Roosevelt piano and pictures with Old Saint Nick in the Carriage House. Cookies and hot chocolate will be served! Many raffle baskets will be on display and holiday decorations and the baskets will be raffled off at the end of the weekend. A special sale of historical gifts will be on sale as well. We have great items including; local history books by author Gene Horton, ornaments, note cards, tote bags, and Meadow Croft prints. All of these items would make great holiday gifts! The admission fee is $5.00 per person.

We thank our chairperson Leanne Berg for her efforts in coordinating this event. We thank our many volunteers who have put in countless hours preparing for this weekend. We look forward to seeing YOU at Meadow Croft this weekend to celebrate the season. 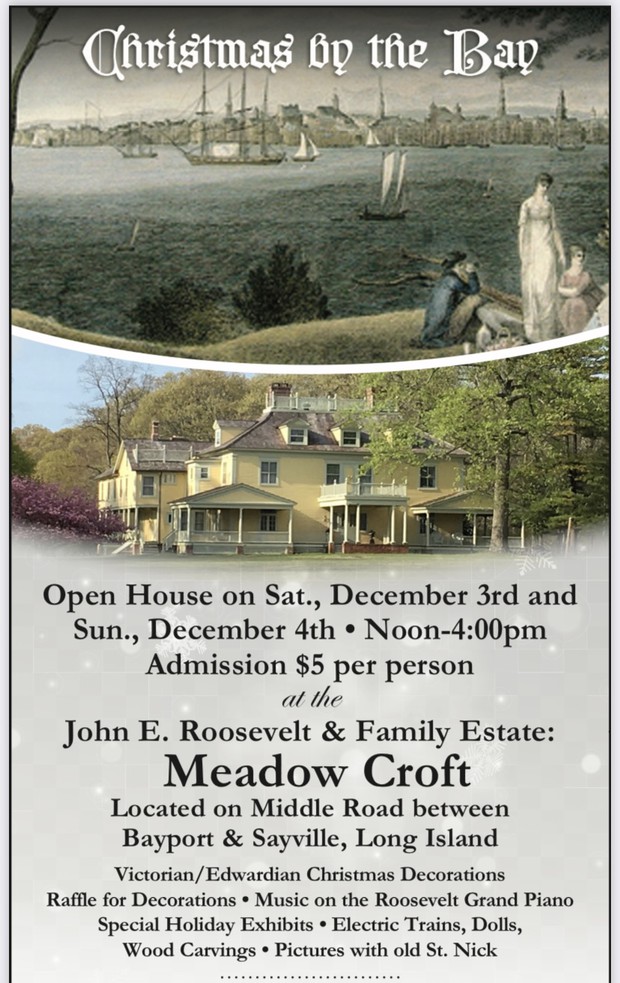 The nominating committee is developing a slate of members for the 2023 board. There are open seats; including directors. Any current paid BBPHA member may serve on the board. It requires only one meeting per month. If you would be willing to serve for the 2023 year, please contact us at bbphistorical@gmail.com

We are also looking for members to serve on various committees throughout the year. You can work from home! If you have a particular skill or interest (house tour, special events, light clerical and organization) please contact us at BBPhistorical@gmail.com.

FYI: As reported in a previous newsletter, we have completed the project to digitize our newsletters from years 1894 to 2009. Now you all have viewing access to these newsletters from you computer. We are thankful to the Robert David Lion Gardiner Foundation who funded the program which was administered by the graduate history department of Long Island University, headed by Dr. Greg Hunter. The hard copies of the newsletters were sent to LIU and the students digitized them for web access. We are proud to offer them to all of our members for a look back in time. Follow these instructions for access. There is no log-in needed.

4. You will see the years in chronological order with the image of the front page.

6. IMPORTANT: Click on "View Gallery" This tab allows you to scroll through the pages.

7. Scroll through the pages using the "Previous" and "Next " buttons at the top of the page.

Have fun looking into the past. The current board members want to thank the previous members for their hard work in creating the interesting stories and posting the photos which make these items the valuable artifacts that they are. Thank you!

The Long Island Conservancy, with the support of Spadefoot Design and Construction, has been engaged to restore habitat here at Meadow Croft. With the direction of Suffolk County Parks Director of Historical Services, Richard Martin, the original Historic Landscape plan was followed.

Eleven red maples were planted along the western spur of the driveway in keeping with the John Ellis Roosevelt Estate's original planting design from the early 1900's.

In addition, a native wildflower bed was planted where historically there had been a garden. Lemon balm, broom sedge, and bergamot were planted. These new plantings will help restore native habitat and provide an educational experience for Suffolk County residents. Invasive plants including mugwort and tree of heaven were also removed. More plantings are planned and contemplated. 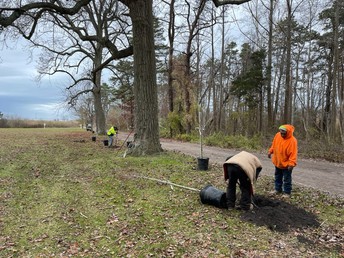 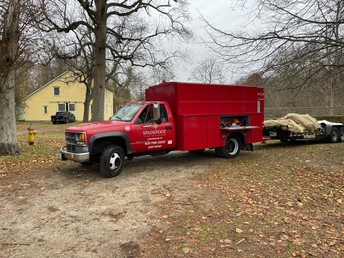 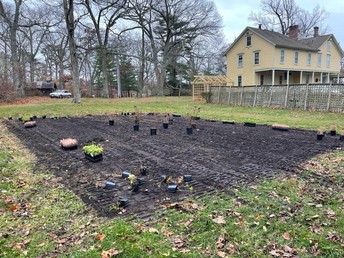 The Stillman Barge at the Foot of Blue Point Avenue

These articles first appeared in the Bayport Blue-Point Gazette and were written by Gene Horton. They are reprinted here with permission.

Only a few old-timers would remember the STILLMAN BARGE. It was located at the foot of Blue Point Avenue tied up to the town pier. It was there from the 19-teens until the 1930's. It was only open during the summer months and was owned and operated by Mr. & Mrs. Stuart Stillman.

In April 1939, the NY WORLD TELEGRAM ran a story about the Stillman Barge. "There tucked securely into a shoulder of piling and lashed to dockside, is the Stillman Houseboat. There has been a Stillman Houseboat in that berth for 20 years, although this, the second, is only about 14 years old. Stuart Stillman, a thin, white-haired boatman goes out every day and digs up the clams, while Mrs. Stillman, an amply proportioned woman with a kindly manner and a somewhat worried expression, turns out clam chowder. "It's the New York kind, but I don't make it like they do in New York," she tells you and clam fritters and fried fish, and crabs and splendid small donuts which she calls snowballs, and applesauce cake, which is her husband's favorite.

I don't know how you describe direction in a houseboat; nothing with such uncompromising ends can have anything to do with fore and aft...but the eating cabin occupies the inshore half of the boat and the rest of it is given over to the kitchen and storage space and a small back room where Mrs. Stillman presumably sits whenever she has a moment to sit (they don't sleep aboard). The dining cabin contains two long, rather narrow tables aligned on opposite sides of the room, each set between two benches. If Stillman's is anything like crowded, you would want to be on good terms with your companions! 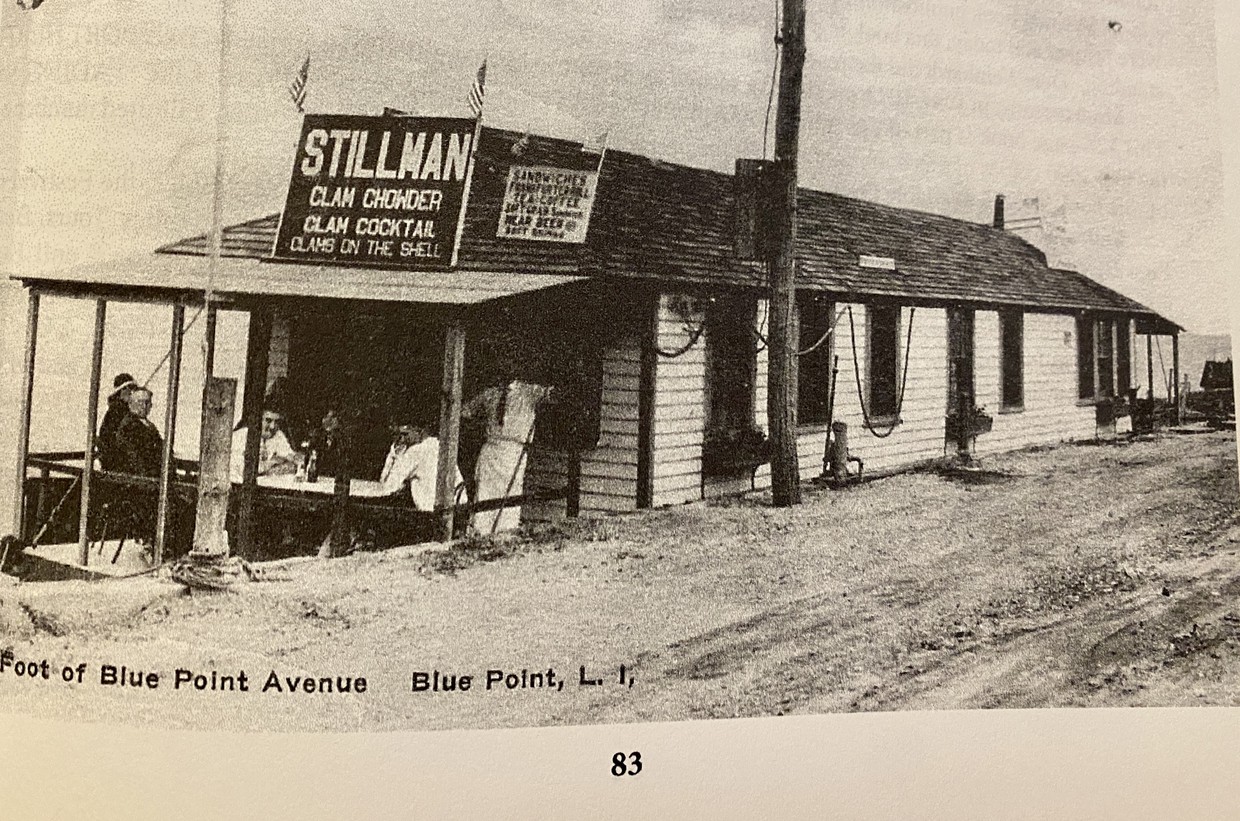 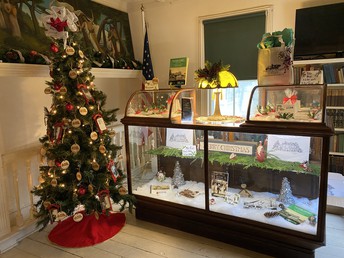 Facebook @BayportHistory
Have a wonderful holiday season! Happy New Year!
Meadow Croft Estate, Middle Road, Sayville, NY, USA bbphistorical@gmail.com 631-472-4625 BayportBluePointHeritage.org
Embed code is for website/blog and not email. To embed your newsletter in a Mass Notification System, click HERE to see how or reach out to support@smore.com
close