STORY FROM THE EXHIBITION

During this week there has been an exhibition based on funny drawings in the hight school, where everyone could have seen it. I personally did it and although I thought that all the painting were fantastic, there was one that caught my attention.

The picture is about an alien who appears near to what it seems to be a normal man. However, the real identity of him is not what you think, because he is another alien who has been in our country since he was a child in order to study our behaviour.

His mission was supposed to be finished by this time, reason why the other alien is in our country, but he had forgotten about it because of the large number of amenities and the fantastic weather our country has, so now he is trying to persuade his partner to live secretly with him here. Would you be able to identify them in real life?

From my point of view, as I have said before, I found the exhibition really interesting because is not about normal draws or boring topics, and as well as your attention would be caught by the majority of funny draws, your mind would constantly be thinking about possible stories from them. I would definitely recommend it! 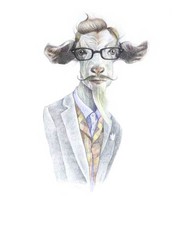 Hi! My name is Enmanuel Goat, mainly known as Doctor Goat. As you can see in the image I look so pretty with my hipster glasses. I'm sixty years old but it doesn't mean that I am in fashion. So, I'm a psychologist and I try to solve mental problems of any kind of objects. I usually treat with humans, who are the craziest species. Why? They are destroying their own planet and they don't do anything to avoid it.

People often say that goats are the symbol of the evil or the demon. All of these thinkings are stereotypes of us.

I think that humans live in an opposite would where they are their own demons. 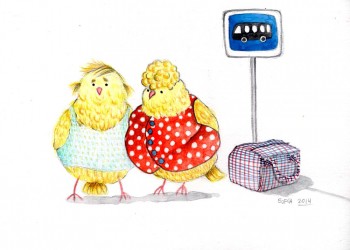 One day, when I come back home from the library, I saw something that cought my attention: two chickens at the bus stop. I couldn’t believe that so I took my mobile phone and took them a photo.

I was very interested in them although embarrassed because the female chicken was looking at me. I decided to go to see who they were.

Pipo and Pipa. Pipa was a very nice, confident and a little flat chicken like Pipo, but he was very shy and he looked sad. They has a suitcase with clothes only for Pipa! , who wore a beautiful shirt with dots, on the contrary, Pipo wore a blue t-shirt.

I was talking to them for a long time. They were waiting for the bus to go a farm to spend their holidays, but their chicks stayed here with her “grandchickens”

When the bus arrived, I said goodbye to them and continued my way home. 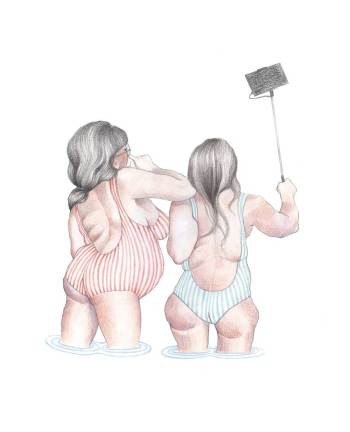 MODELS ON THE BEACH

Two friends were on the beach on summer holidays. They had just finished their modeling career.

Alba and Sandra are taking a picture to send their friends and their families, to see how they were. These girls come back after swimming in the sea and lie down to sunbatle when, suddenly, a man who had been watching them post a photo asks them if they wanted to make a parade of bikini model of large sizes.

Finally, they accepted this job because, although they were fatties, they would have to show a good image because somebody who is a little fat can also be a model. Not like the pictures that the television and the shop give. Stop parading only thin women¡

Rocío Muñoz Rodríguez
Embed code is for website/blog and not email. To embed your newsletter in a Mass Notification System, click HERE to see how or reach out to support@smore.com
close